Vending machines in Japan are amazing. You can buy everything from them – cold drinks, soup, beer – and in one machine, bananas. Every time I’ve been to Tokyo, a trip to the banana vending machine has been on my must-do list – so here’s how to add it to yours.

Why is there a Banana Vending Machine in Tokyo

The machine comes from the banana company Dole and it first arrived in Tokyo’s Shibuya in 2010.

When it first launched Dole said people were using it because it was quicker than trying to find a grocery store in the middle of fashion-focused Shibuya – there’s also a suggestion that not having to deal with people is appealing to many in Japan.

Originally, there were plans for four banana machines dotted around Tokyo – but as it stands this is the only one.

Where is the Banana Vending Machine?

It’s in Shibuya, about a two-minute walk from the famous crossing.

Technically the machine is in the station, by exit three, but I find it easier to head out of the station and find it from street level than wind my way through the underground walkways.

Bonus, this gives you a chance to head across the Shibuya crossing which is one of those must-do Tokyo experiences.

The easiest way to find the banana vending machine is to search google maps for the Village Vanguard store and head towards this.

When you get to the point on the map, you won’t see the store – or the machine – as both are underground.

Take the stairs you’ll see to your the left and keep going down to level B2 – where you’ll find both the store – and the magical world of bananas. 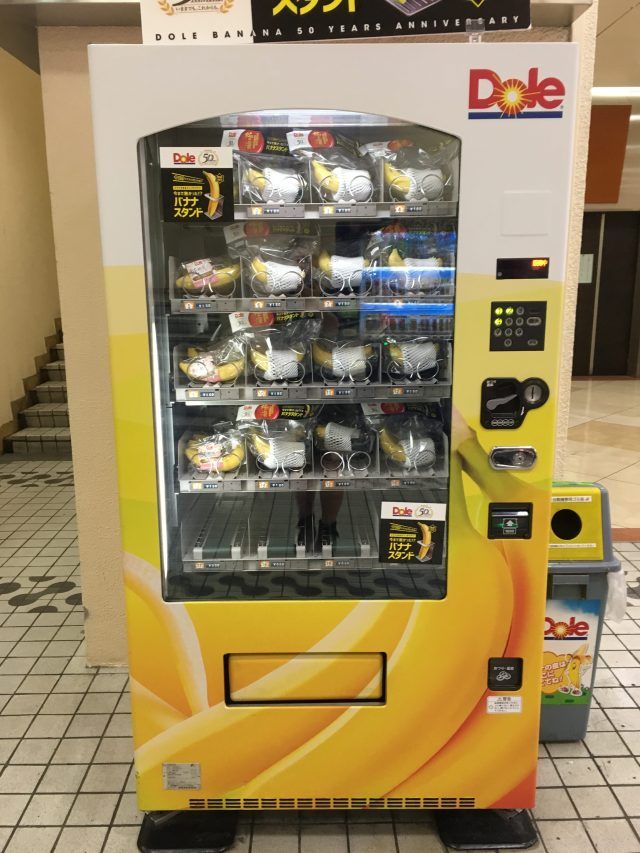 How Much are the Bananas?

You’ll pay 150 yen for a normal banana (although they are described as a low-sugar on the Dole website) and 180 yen for a so-called Super Banana. What’s super about them I can’t tell you but, they do come in swankier packaging.

If that sounds pricey for a banana, well, it’s Japan – land where you can buy melons in food courts that cost 21,000 yen so looking at it that way, it’s positively cheap.

Also, the machine is kept at the perfect banana-friendly temperature of 13c which means they won’t ripen too quickly or go brown while they want for someone to pick them –  and frankly, if you want a suitably pampered banana you’re going to pay for the privilege.

How to Use the Machine.

Basically, pop the money in the machine, pick which of the many bananas on display appeals to you most, push the button and then, as if by magic, it appears in the tray at the bottom.

Sorry, but this never gets old to me. Check out the video below to see it in action.

Remember though, it’s important to eat your banana by the machine.

Despite the fact that there are vending machines all over the place just asking you to munch on the move, eating on the go is not the done thing in Japan so, eat your banana there and then and pop the skin in one of the nearby bins.

Other Cool and Useful Things to Know About Japanese Vending Machines

In fact, there are over 5.5 million vending machines dotted around and while they most commonly sell drinks, you can find everything in them from hot food, clean clothing, gifts and fresh fruit.

Searching for the strangest food, drink or other goodies that you can find inside a Japanese vending machine can make a seriously fun side activity while you’re wandering around.

As such I’ve picked up a fair few ‘useful’ facts about vending machines which may come in handy on any upcoming trips to Japan. 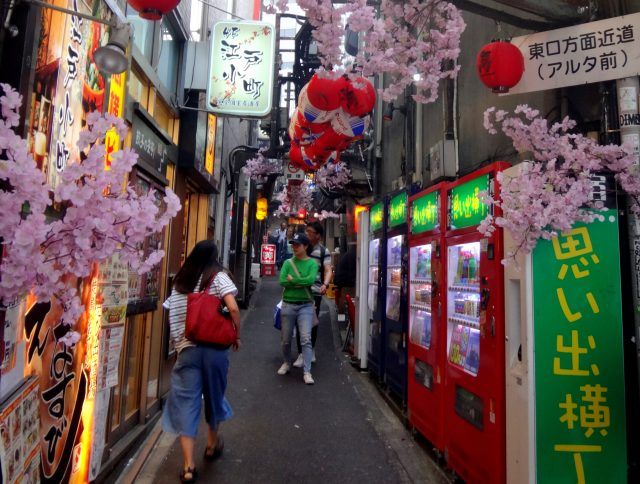 1. A machine can sell both hot and cold drinks from the same space. If you are buying a drink, the colour of the buttons gives away the temperature of the drink inside – red ones mean it’s hot, blue means its cold. I became slightly obsessed with the hot, sweet milky tea on my last trip.

2. Their design and contents can be themed depending on what area you are in – we found ones in Nara with deer on; ones in Kyoto with Geisha on and this fella by Kyoto’s Kitanohakubiacho station. I have no idea what’s going on here but I rather like him. 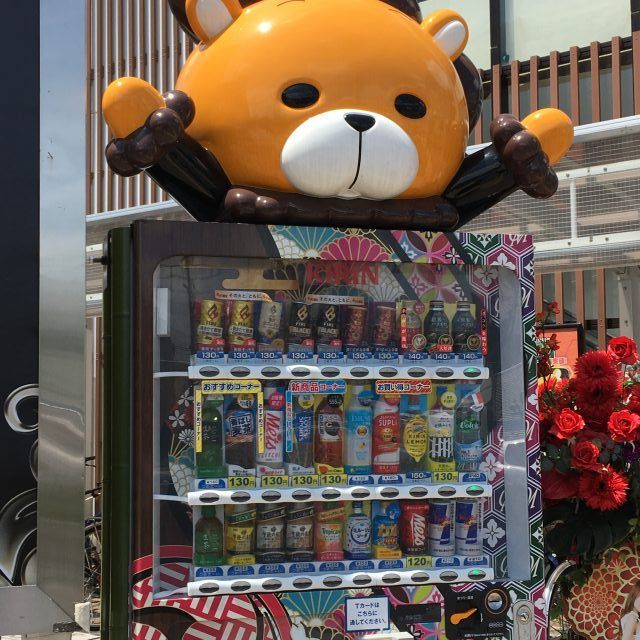 3. Look carefully whenever you walk past a machine, there are some really weird foods and drinks in these things and it really doesn’t cost much to try them. I spotted a strange hot sweet potato drink on my last trip (see below) – and yes, that’s some kind of corn soup next to it. I also found an odd milk jelly drink that was actually REALLY good.

4. If you have a PASMO or Suica card to use the Tokyo Metro you can also use it to pay for drinks and other items at vending machines

5. You can buy beer and cigarettes from vending machines in Japan. In theory, they are supposed to scan your driver’s license or require you to input a special proof of age card, but the only time I have tried to use one it spat out a tasty Asahi no ID required. 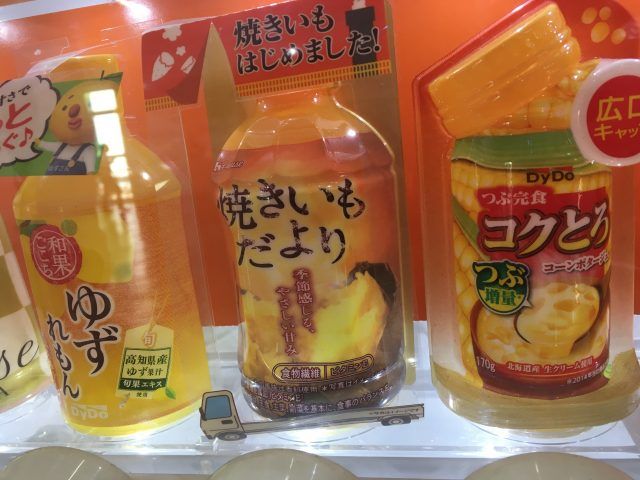 7. The toy vending machines you see all over Japan are called Gachapon – because of the noise the handle makes when you crank it, and the sound the little capsule makes as it falls into the trap. These have an entire subculture of their own – if you want to find out more check out this longer post on Gachapon.

8. If you see an underwear machine on the street don’t get too excited. It’s clean!

While you used to be able to buy used underwear from machines in Japan but it got outlawed a few years ago. You can still find the machines in some more dodgy stores in Tokyo, but I’ll let you do your own internet searching on that one!!!

9. Some machines will suggest things for you. New touchscreen machines are springing up, particularly in railway stations and not only can you choose what you want to order from the display, but the machine also uses a camera to determine your age and a gender and suggest something you might like.

If it starts spitting out energy drinks it might be time for an early night.

10. If you want to find out about the weirdest Japanese vending machines launching when you’re visiting, head to a website called Soranews24.com who frequently cover oddities their readers have spotted.

Haneda Airport is also apparently a good place to find some quirky machines – I hear they have an apple vending machine that I may have to check out next time. 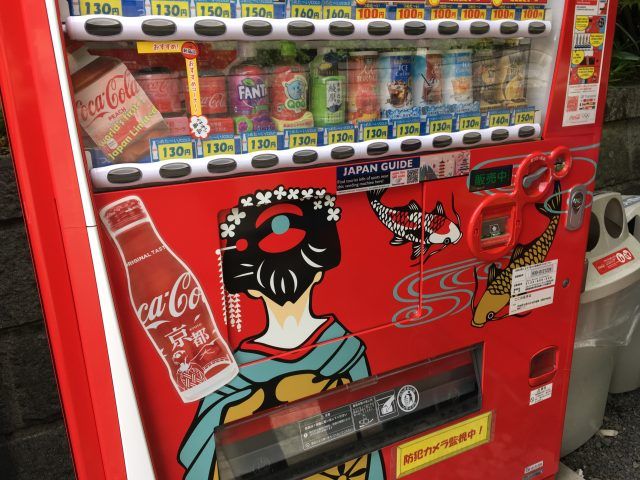 So, that’s street vending machines covered, but there’s one last Japanese ‘vending’ machine you might come across on your travels…

How to Use a Restaurant Vending Machine.

This yummy looking bowl of ramen came from a vending machine – well, kind of.

See, in many cheaper restaurants in Japan, particularly those selling ramen, instead of ordering from the staff inside, you place your order via a machine outside.

It’s the saviour of anyone nervous about ordering food in Japan. but if you’ve never used one before using the machine can be a bit confusing, so here’s my guide to what to do. 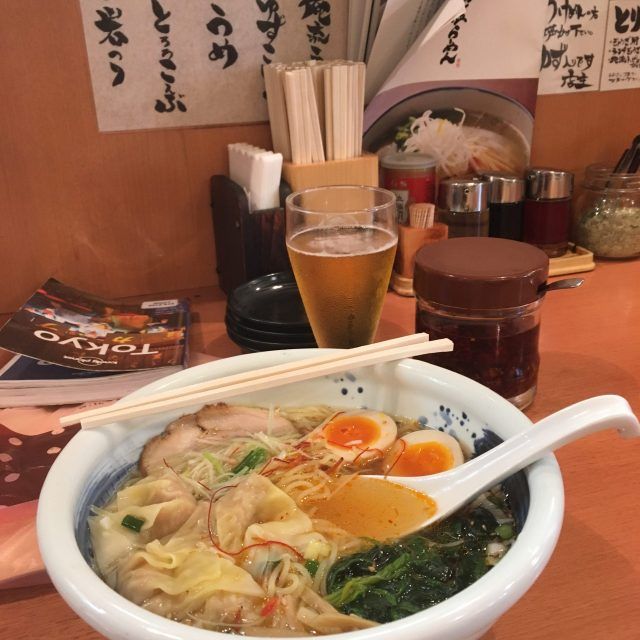 First, check whether there are seats inside your venue of choice as you’ll be ordering before you sit down. If there are, head to the machine – which might be outside the restaurant or just inside the door.

You’ll normally find pictures of the dishes, or at least a description on the button – which may or may not be in English – and the price.

If there’s a second number on the button – ie a 3, 6 or 10 – and it’s something that comes in pieces like gyoza dumplings that number tells you how many are in a portion.

You can also order drinks and beer.

Weirdly, you normally put your money in first, then push your buttons – I always get this wrong and wonder why it isn’t working.

Once you’ve made your choice the machine will spit out a ticket – or two, three depending on how many things you’ve ordered.

It may then spit out your change. If it doesn’t don’t panic. There will be a button to press that will then cause the change to come out.

Take your ticket and either give that to your server when you sit down or put it on the table and they’ll pick it up and deliver it to the kitchen.

So, there you have it my guide to the Banana Vending Machine – and heaps of other cool Japanese vending machine info.

If you liked this I’m pretty sure you’ll also like my guide on where to meet a robot in Tokyo too, so go on, why not head over to read that now!

If you liked this post why not share it so other folk can buy a banana from a machine too! 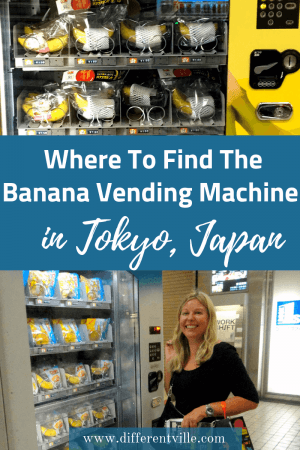