British artist Tracey Emin has installed 67 tiny birds in an area of the Sydney CBD and the idea is kind of like an arty Pokemon Go as you try and spot them all – of course, I had to go and try. Here’s my guide to where to find the Tracey Emin birds in Sydney. 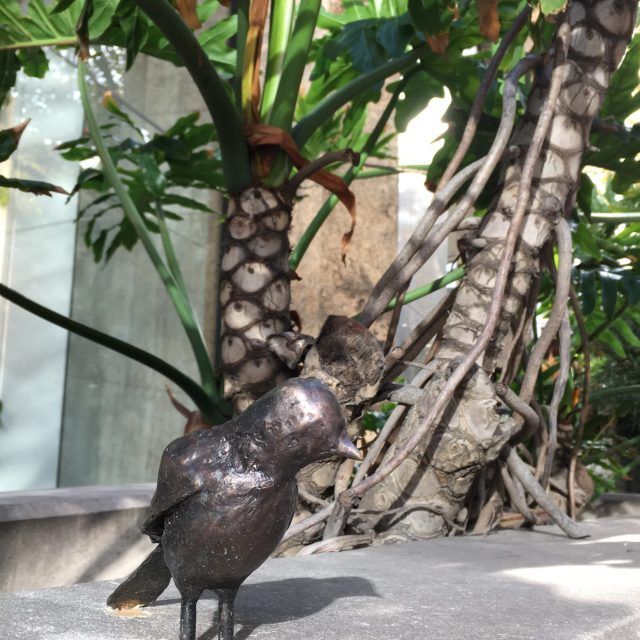 I’ve just spent an hour with my neck cricked upwards, I’m going to need osteopathy after this – well assuming I survive that is! I’ve already been tutted at by numerous angry office workers as I meander slowly around staring at the sky like some doped up cloud watcher. These birds are not easy to spot!

When I first heard that Tracey Emin’s new art installation The Distance of Your Heart had landed in Sydney’s CBD I thought she had placed tiny birds all over the place.

I figured it would be like when I go hunting for the work of Will Coles and you just stumble across them during your normal day – but then I discovered that all 67 birds were in one area and that became a challenge, how many could I spot in the 90 minutes I had before meeting a friend? So, off I went. 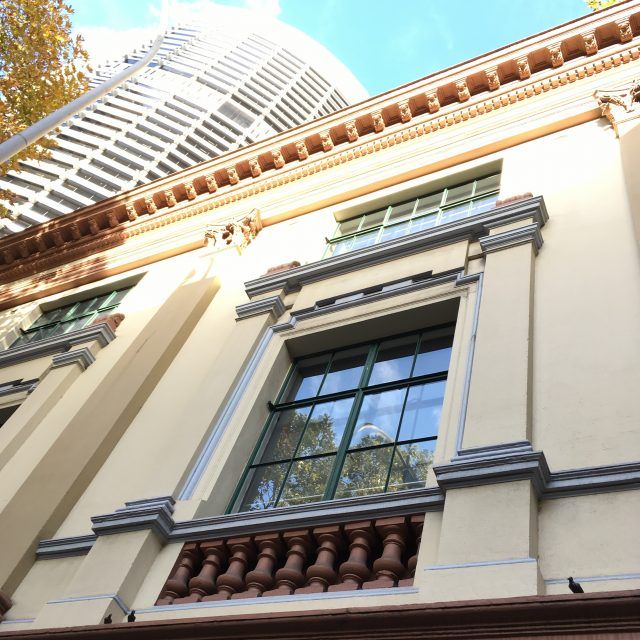 Where to Start your Tracey Emin Bird Hunt

The birds are all placed along the roads of Bridge Street and Grovesnor Street at the end of Sydney close to Circular Quay. It’s roughly a straight line of about 850m.

They’re are placed where normal birds would sit – so, on top of windowsills, on ledges, the tops of lights, under benches etc.

But they are small – starling or sparrow-sized – and brown. This means spotting them is not that easy – and photographing them is even worse.

I found my first one on a ledge at the Ministry of Education building just past the junction of Bridge and Young. From then, they came thick and fast, helped by the fact that in a few areas you find two or three clumped together.

The Best Time To Look.

Now, as I alluded above, if you try and do this you might want to pick your time carefully – I was wandering about at 5pm on a Friday which is prime people time in this part of Sydney which led to a few grumpy people rushing past me on their way home.

It doesn’t help that this part of Sydney is currently plagued by roadworks for the light rail system they are putting in and so it’s all a bit chaotic down there at the best of times.

As such, if you want to go on an official bird hunt I’d suggest going Saturday or Sunday when this part of the city is pretty much deserted and you can spin round in circles staring upwards to your heart’s content. 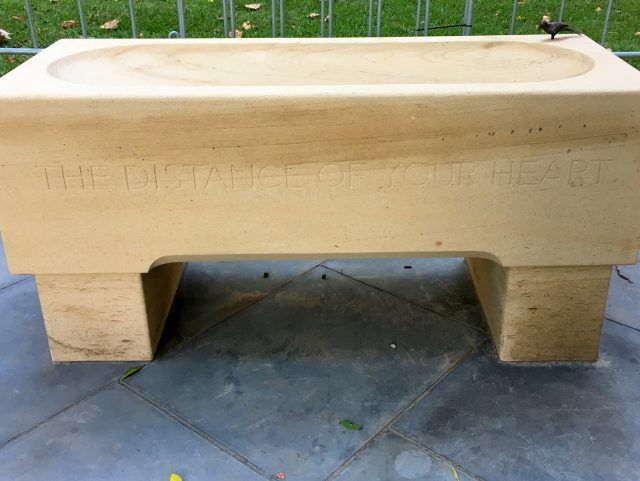 Emin’s idea for The Distance of Your Heart is that each bird should remind you of someone you love.

She was inspired by the fact that Australia is so far away from everywhere else (and even the main cities here can be a half a day flight away from each other) and so many people here aren’t that near loved ones.

She also hopes it helps people look at places they go all the time in a different way – and it definitely does that.

I noticed so many cool things when looking for the birds that I hadn’t seen before – like a fantastic old water fountain in the middle of Macquarie Park, all the amazing statues on the buildings down Bridge Street that I normally ignore and this tiny shrine to the the Virgin Mary hidden away in the back courtyard of St Patrick’s Church. 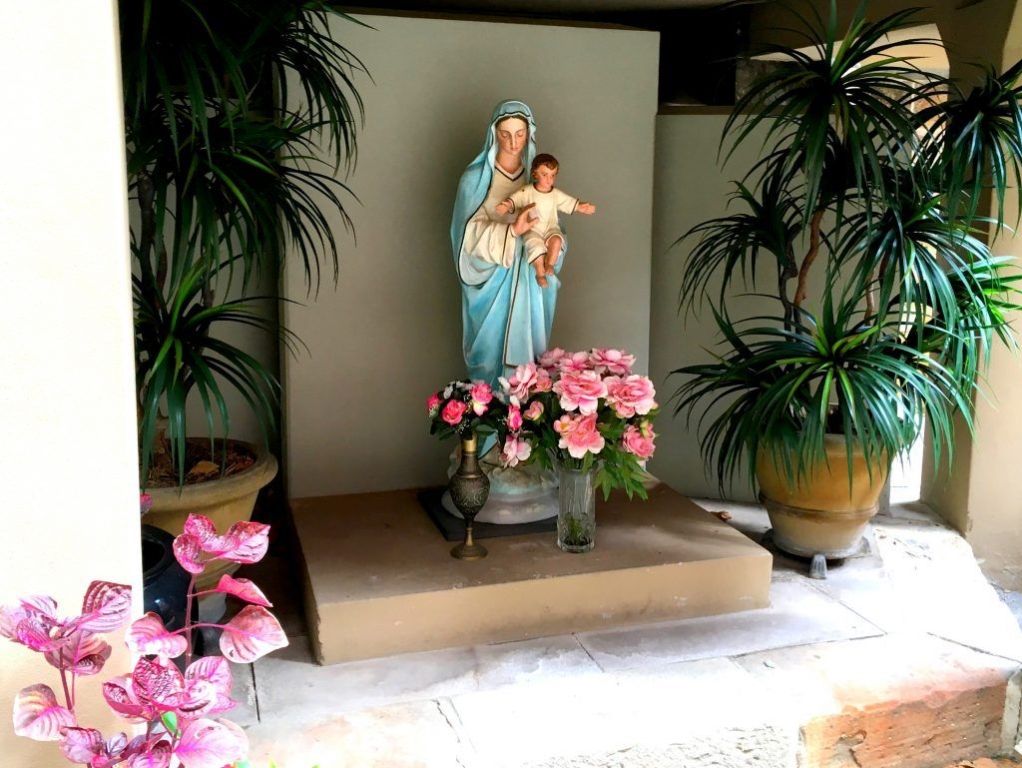 On my first trip I found 28 birds – I then took my own advice and went back on Saturday morning for another go and found 20 more. Which means I’ve still got 19 very well hidden sneaky little so and so’s to find.

I had to stop though – not only was my neck aching, I started losing my grip on reality – I wasn’t sure what was a real bird, what was a fake bird and what was a security camera on top of a building….I’ll have another go next time I’m down there though. I will not be beaten. 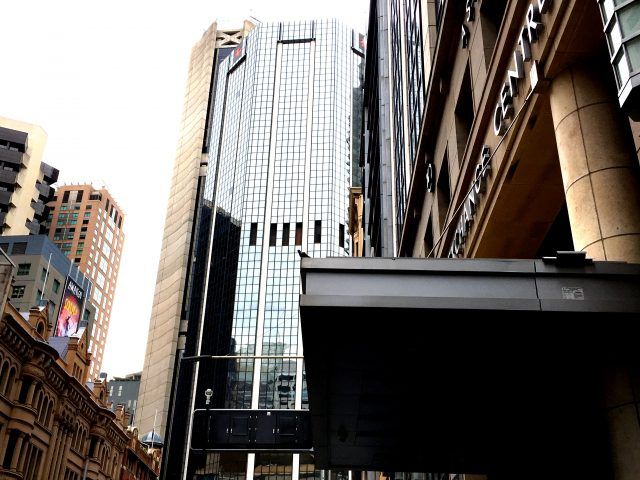 Where Are The Tracey Emin Birds in Sydney?

These are the locations of the ones I’ve found so far – I’m not going to give things away totally as that would spoil the fun, but I will give you some clues and how many birds you’ll find there.

If you don’t want to know, look away now and just go hunting for them yourselves. Look I’ll add an extra picture so you won’t get any spoilers if you don’t scroll any further. 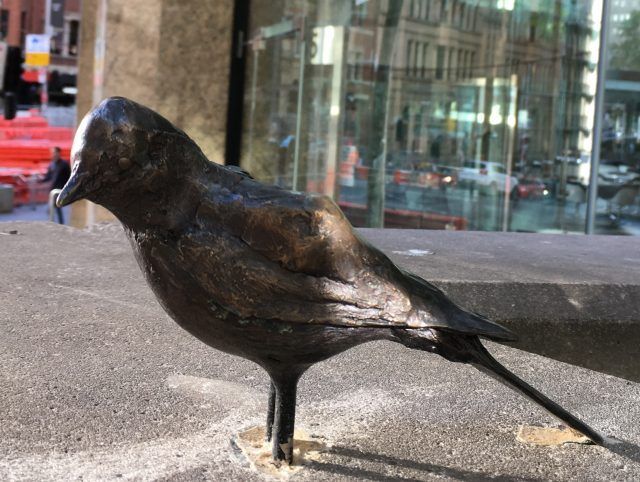 To make it easy, this guide goes from the top of Bridge Street where it joins Macquarie Street down towards Grovesnor Street and the Kent Street Underpass. It starts on the left-hand side, then swaps to the right. Don’t forget, look where birds would normally sit – and that might mean down as well as up.

The Museum of Sydney – 6

The Intercontinental – this is on the other side of the road, but you’ll never spot this bird from under the building itself. It’s HARD.

The Ministry of Education – 1

Somewhere at the corner of Bridge and Gresham – 3

On the corner of Grovesnor Street – 1 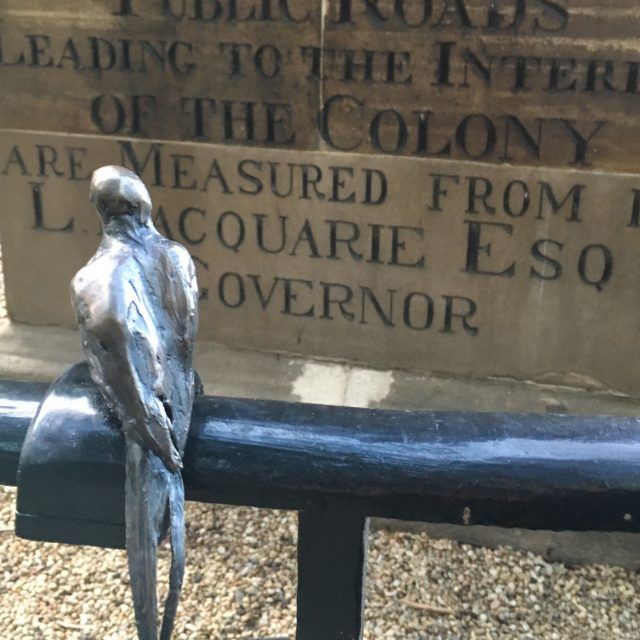 Now some reports say the birds continue into the Kent Street Underpass at this point, but I’ve been down there twice and haven’t spotted any so if they are there they are VERY well hidden.

My guide, therefore, sees you turn back and go down the other side of the road to back where you started.

The corner of Harrington Street – 3

Macquarie Place Park – the motherlode. I found 12 in here, look up, look down, look all around!

So, as I write this, I still have 19 more birds to find….if you spot any that aren’t on the list, please leave locations in the comments. And when I find more, I’ll add them to the list above. Have fun hunting for them.

If you want to find out more about Sydney Street art, why not book a Street Art Tour? Click for details

If you like this post please share it on social media – your bird hunt will be eminently successful if you do (see what I did there?). Emin,…get it. Ok. I’ll get my coat. 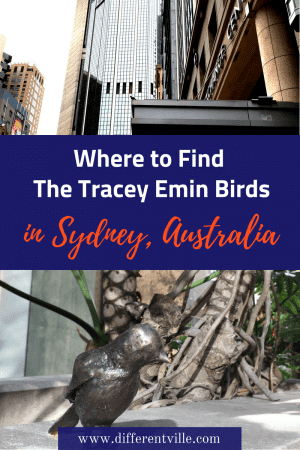 9 thoughts on “The Tracey Emin Birds, Sydney – Here’s Where To Find Them”

Looking for an Airbnb?