‘What the hell is that it’s scary,’ is not something you normally want to utter when you return to your home in your dream city after a few years living abroad – but as I came home one day with a bottle of milk, I noticed my first piece of Sydney’s concrete street art – a snarling face in a balaclava, looking like something that if upright and walking, would probably be on it’s way to nick the contents of the nearest safe!

Thankfully, it wasn’t upright and walking, it was flat on windowsill of the local art college… ‘students’ I thought. It was a few weeks later when we realised it wasn’t the only piece of concrete art nearby and nor was it the work of the college’s art students but a famous Sydney street artist called Will Coles. 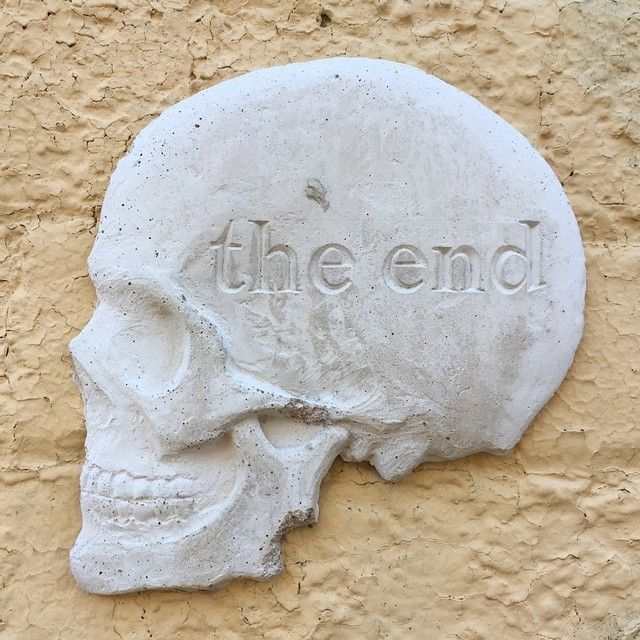 The discovery was made when The Boyfriend came home and said, ‘have you seen the skull’ – turns out literally steps away from the concrete balaclava was a concrete skull stuck to the wall. And, behind it (and don’t ask me how we hadn’t spotted this one before) was a full-sized concrete washing machine. After a bit of googling, we realised we were living in a neighbourhood lucky enough to be Coles’d with cool Sydney street art. 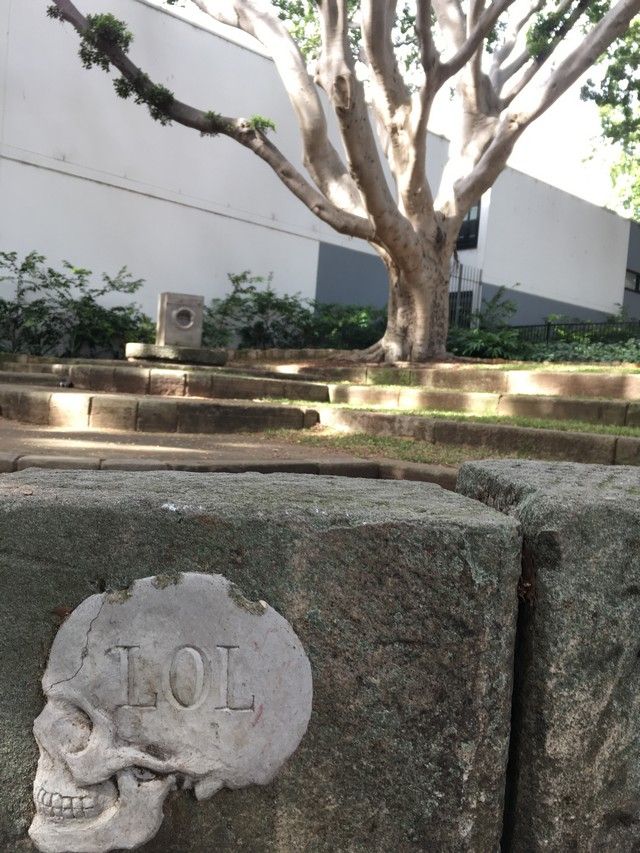 Who is Will Coles?

On his website Will Coles describes himself as a man who ‘loves his wife, carbohydrates and strong adhesives’ – and seriously he must have bought buckets of that last one as, after a while, we realised his concrete masterpieces aren’t just in our little enclave of Sydney, they are all over the place.

There are concrete balaclavas outside a bank in the City, squashed ‘Coke’ cans hiding next to bus stops in St Peters, concrete gloves appear as if abandoned on walls in parks, streets and even, cheekily, outside the Art Gallery of New South Wales. One day I was walking back to Redfern station from a local food market, and I spotted six Will Coles pieces all in one 100ft stretch of road. It’s now become something I do as I wander about – instead of looking up at the beautiful blue Sydney sky, I’m scouring filth-filled kerbs and crevices just in case something is stuck there.

Often, if you find one piece there’s more nearby – so, if you ever see a blonde in a tea dress wandering around an alley near your house with her head swiveling round like something from the Exorcist, don’t worry, I’m not casing the joint, there’s probably a concrete skull or a squashed coke can somewhere in the vicinity and I’m just looking for its friends.

My Favourite Will Coles Pieces

Personally, my favourite pieces are the Vuittonesque purse that’s stuck on a shady corner of Oxford Street and Greens Road in Paddington with FAKE written on it (below), the dead bird with NOTHINGNESS etched on that appears in that art-filled stretch close to Redfern station and that skull and washing machine combo. I won’t even try and attempt to be an art critic and interpret Coles’ meaning behind them. I just like them. 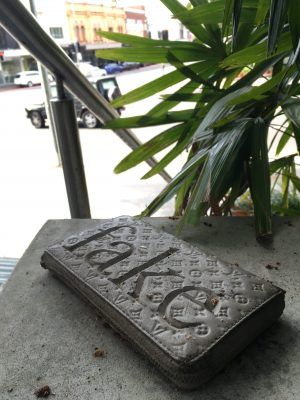 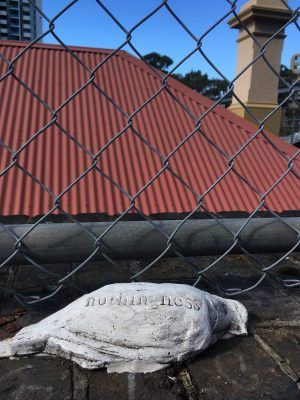 If you’re coming to Sydney at some point in the near future and want to check out something a bit more off the beaten track than fab views of the Opera House maybe consider a Will Coles Sydney Street Art Scavenger Tour.

And, if you see any of the following stuck somewhere odd and think what’s that doing there, chances are you’ve spotted your own Coles creation.

Concrete balaclavas, guns with a bent (and other erm, interesting) barrels, purses with words scrawled on them, pairs of gloves, skulls, plaques inscribed with Will Coles Was Ere, remote controls, mobile phones, concrete televisions, washing machines or armchairs, dead birds, squashed cans with words on, goon bags with writing on them and even the odd concrete teddy bear or baby – again, with words inscribed upon them.

Prime spotting areas include around the University of New South Wales art college in Paddington, Newtown – particularly Gladstone Street, Erskineville, Marrickville, Redfern and Alexandria. I’ve only found one batch so far in the CBD but I hear there’s more. There’s even one concrete balaclava on Cockatoo Island (another place you need to visit – post on that coming in the near future). 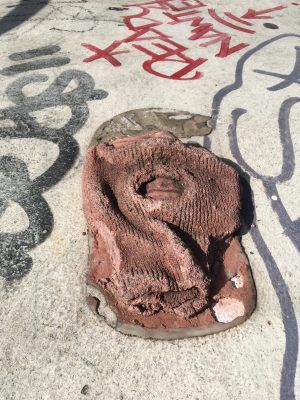 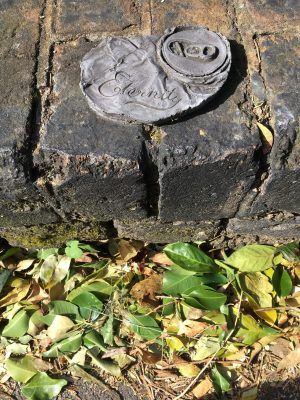 Oh and if you’re not coming to Sydney, you might still get a chance to spot a Will Coles masterpiece – in 2015 Coles moved to Europe and is now glue-ing his way merrily through Valencia, Barcelona, London and some towns in Germany – so, wherever you are, keep your eyes peeled!  His instagram @mrwillcoles gives some clues as to where to find his work abroad. You’ll also find more ideas on his flickr page- but don’t click this one if you’re easily offended!

The biggest problem is spotting them before someone tries to chisel them off – Coles regularly hashtags himself as ‘most stolen artist’ on Instagram and lots of the pieces you see have chunks missing out of them where someone has had a go at getting them off. Thank heavens for strong adhesives eh?

♥ Did you know there’s a David Bowie Mural in Sydney? Click to read more. ♥

Where to Spot Will Coles’ Street Art in Sydney

The list below gives you the locations of some of the main clusters of pieces I’ve found – I’ll add to it when I find more. You can also get an idea of where they are on this map.  Areas like Newtown, Enmore, Redfern, Erskineville and Marrickville also have isolated pieces dotted around the place. Do you know where people can find more? Why not help add to the list by posting a comment below.

Redfern: Particularly Little Eveleigh Street alongside the railway tracks – including my favourite bird

Newtown: There’s a wall packed with skulls, balaclavas and more in Gladstone Street, again, by the railway tracks. There are an oil can and a pair of gloves at the main road crossing outside Newtown railway station. Walk down towards the Courthouse Pub and you’ll also find another concrete washing machine

Paddington: The purse and a balaclava are all right by the art school on the corner of Greens Road and Oxford Street. The washing machine is on nearby Selwyn Street

The CBD: There’s a balaclava and gloves by the NAB and Commonwealth Banks at the junction of Liverpool Street and Castlereagh Streets. Then walk north on Castlereagh Street to find Dungate Lane, you’ll find a plaque, a gun and a remote control.

Waterloo: There’s a few on Danks Street, look out for the teddy opposite the shop Pure – it’s the only place I’ve spotted one of those so far

Erskineville: There’s lots of pairs of gloves around Erskineville Oval and the small park opposite it on the junction of Ashmore and Mitchell Road.

Where Else to Check Out Sydney Street Art

If you’re into street art, Sydney has some amazing pieces mostly located around the Newtown/St Peters area.

If you want to book a guided tour, then you might want to check out this tour from Justin at Local Sauce which takes you to the Newtown Street art, but also some of the fun foodie stops nearby. I took a tour of Sydney’s Chinatown with Justin and it was fantastic (see more about that, and some other things to do in Sydney’s Chinatown here)

If you prefer to do things your own way, then check out this self guided street art walk by Paula at the Sydney Expert page which covers things pretty extensively. 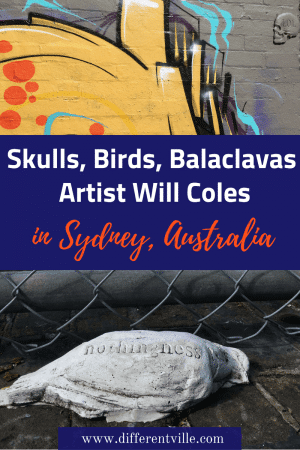