Attention, Attention – this is a public service announcement. Time is running out if you want to go and see the uber cool Seven Magic Mountains in Las Vegas.

That’s them below – seven 30ft high colourful pillars of limestone created by the Swiss artist Ugo Rondinone. They went up in the middle of the Nevada desert in May 2016 – and are due to come back down again in May 2018…..Erm, actually, record scratch, reverse, hold the front page as it was announced in Feb 2018 that the Seven Magic Mountains are going to be staying put – at least until the end of 2018. Yay! Now, read on to find out how to get there (plus a heap of other stuff about art in Las Vegas) 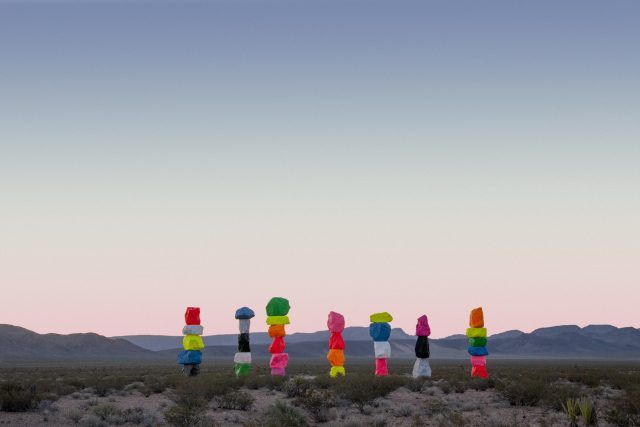 Seven Magic Mountains has been described as a psychedelic Stonehenge and estimated that by the time it’s life in the desert comes to an end, over 16 million people will have seen it, from the freeway at least.

The idea behind Seven Magic Mountains is that it reflects the stone signals people used to leave for each other in the past – they’d stack up little piles of stones (called cairns) to tell others which path to take. And, while it might look like they are precariously balanced, there’s actually an iron spike going through the middle of them to keep them stable.

I think the thing I like about it most is that wherever you stand it looks different. Face it one way and all the totems are in a row, but walk to the side and they cluster together in a fabulous flouro eye assault.

Sadly, the chance of me making it to Vegas before they take Seven Magic Mountains down is slim to none, which is a shame as I would love to have seen it (have you seen the homepage of this blog – to say I am a fan of bright colours is an understatement!) – but, at least I can tell you guys about it in case you hadn’t heard of it yet. And then you can go and take pictures of it while thinking of me – which is nearly as good! 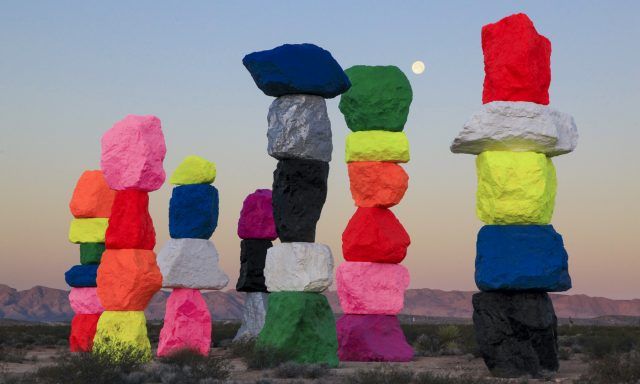 How Much Does Seven Magic Mountains Cost?

How to Find The Seven Magic Mountains:

They are located about a half an hour drive South of Las Vegas in I-15 close to the town of Jean. Here are the official instructions from the Seven Magic Mountains team – complete with handy maps in the links.

Please park in the onsite parking lot. Street parking is discouraged. No public transportation is available to the installation site. 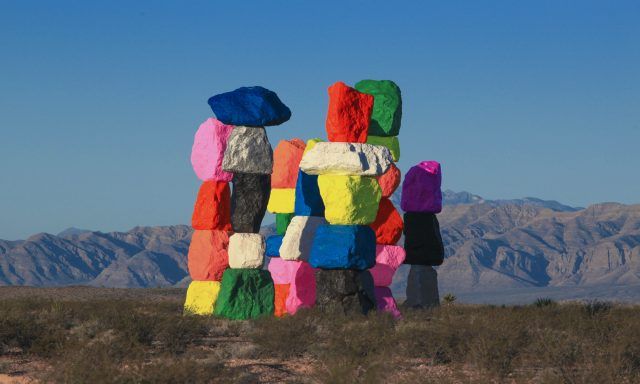 What if they do knock it down?

Well they’re trying to keep it in place, but if that doesn’t happen the plan is to keep one of Seven Magic Mountains in Vegas in the new Park entertainment district behind New York, New York. They are going to take one of the totems to display there. There is also a single totem by Rondinone in Miami in Collins Park. Called Miami Mountain it’s made of five huge boulders and slightly taller than the Vegas Mountains, but one just doesn’t have the same impact as all seven together so if you can, head to the desert ASAP.

Other Art in Las Vegas.

While it might be the newest, brightest and tallest exhibit, Seven Magic Mountains isn’t the only art in Las Vegas. Here are some other ideas if you want to get your culture on…

The Aria Hotel and Casino

This has an amazing public art collection just scattered around the hotel. They offer a free daily walking tour that takes you past the sights, or last time I was there, I went on the Indoor Hike which combines calorie burning and art education in one.

Trust me, you haven’t done tricep dips properly until you’ve done them right next to a priceless Henry Moore sculpture! Guide Rocket also tells you heaps of interesting arty facts – for example, there’s an ice-based sculpture called Glacia in the Crystals shopping mall that never looks the same two days running. Every night the poles of ice descend back into the ground to refreeze and, as they come back out tiny pieces chip off them so they never look exactly the same twice.

You can also download a guide to all the art in the Aria Fine Art Collection on their website. It tells you where to find things and what they are.

The Bellagio and Venetian

The Bellagio Gallery of Fine Art is described as where ‘art goes on vacation’. It hosts roaming exhibitions. Right now it’s showing an exhibition of Samurai art. Tickets cost $18 and are bookable in advance. The Venetian also has a few notable sculptures dotted around the public areas.

But art in Vegas doesn’t just come in the form of paintings, sculptures and other stuff you got taught in art class – the signs, the buildings and the bright lights of Las Vegas are also a form of art.

Walk up and down the Strip to view the current ‘exhibition’ but for the art of days gone by you have to visit the Neon Boneyard. 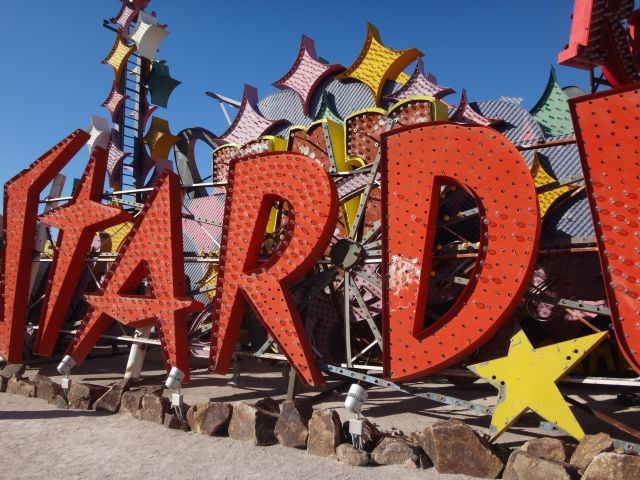 This is where all the fabulous old neon signs of Vegas past have gone to retire – they have over 200 in all.

I’d seen photoshoots of this in magazines but when I’d been to Vegas before it wasn’t open to the public. In 2012 though they opened it as a museum and so I finally got the chance to visit on my last Vegas trip. I was literally on the first tour the morning I arrived and I loved every second of it – and took about 250 photos!. I’ll just share one here – if you want to see more, check out my post on Nine Reasons Why I Love the Neon Museum.  Here’s where to find more details on the Neon Boneyard now called the Neon Museum.

Lastly, if you’ve got a car and fancy a road trip, there’s heaps of other amazing desert art out there. From the Bottle trees in Elmer Long’s Bottle Tree Ranch to the pile of god-fearing televisions that make up East Jesus installation, pretty much everything in this article from Los Angeles Magazine is now on my wishlist. I really need to get on a plane to the US stat!

Where to Stay in Las Vegas

I’ve stayed in a lot of hotels in Vegas – some good, some bad, some now knocked down and with signs in the Neon Boneyard – but on my last trip we stayed in the Vdara. It’s toward the southern end of the strip and we liked it because it’s completely smoke-free and dog-friendly which made for super cute fun every morning around the coffee shop.

It doesn’t have its own casino, but considering you’re not exactly lacking in those nearby that’s no hardship.

We chose it because even the cheapest category of rooms, the Studio Suite, was huge at 54sq metres.  It’s the sister property to the Aria and so it’s just a short walk between them. It’s also very easy to walk to the Cosmopolitan and Bellagio.

If you’re looking for some other ideas – and trying to price up your trip to Vegas, there’s heaps of info in this piece from Katie on just how spendy Vegas is (or isn’t). It’s pretty useful.

Share it on social media – every time someone does an angel gets its wings*. 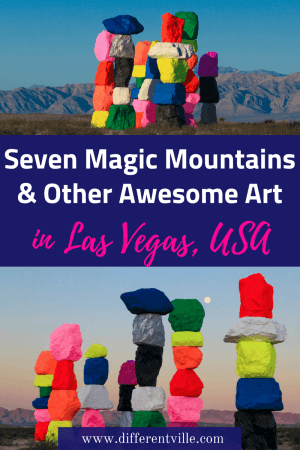 Wishlist is the section of Destination>Differentville where I tell you all about places I think you might like to go, but I I haven’t been lucky enough to get to myself. After all, there’s only one of me – and there’s a whole heap of world out there to tell you about. If you have anything you’d like to see included, drop me a line in the comments or at differentville@gmail.com.