I first saw the Neon Museum in Las Vegas, Nevada in a magazine in the 1980s. There was a beautiful model standing, surrounded by scrap metal in what looked like a junkyard – but looking closer I realised it wasn’t any ordinary metal, it was old faded signs. 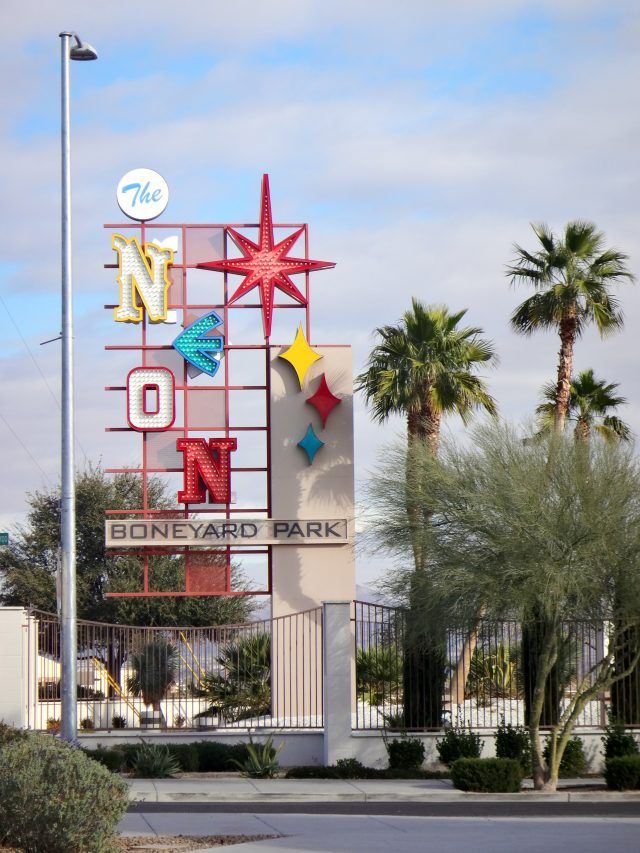 I love signs. I don’t know if it’s the colours, the retro typefaces, the fact that if they could talk they could tell so many wondrous tales, but they draw my attention like nothing else.

When we do road trips in the US, I have my camera on my lap in case I catch an interesting one – the more faded the better – as we speed down the highway – they’re few and far between now unless you drive the smaller roads, but here, in what was then known as the Neon Boneyard, was an entire piece of land full of them.

And these weren’t just any old signs – these were Vegas signs. Brighter, flashier, studded with bulbs. I had to visit this place…butt took another 25+ years before it actually happened.

Which brings me to the first thing I love about the Neon Museum…That it’s there at all.

You see at one point, the Neon Museum wasn’t tourist-friendly It literally was where the signs of Vegas went to rest in peace (or pieces as the case may be) while they waited to be used for spare parts. As the space got fuller, it got to the point that signs were simply being scrapped. Thankfully, someone realised these things were a part of history, saved them and put them all in one lot.

At this point, the Neon Boneyard was seriously on the outskirts of ‘tourist’ Las Vegas and, to visit it, you required a permit and permission. You couldn’t get this as a normal visitor, but it was rapidly becoming a must-shoot place for magazines. When someone from the mag I was working on at the time got to go, I was so jealous I could barely speak!

Over the years, low key tours of the boneyard began, and in October 2012, the Neon Museum officially opened to the public and anyone could visit on a tour.

It took me a couple of years but finally, I got there.

They Just Made it Even Easier to Visit

Even when the museum opened to the public, at first, you couldn’t just wander in there. You had to book a tour – and they do get booked up, particularly the nighttime tours when the 11 signs that have been restored are all lit up so if you want to do a tour definitely book online in advance.

However,  as of June 2018, the Museum has changed the rules and you no longer have to book a tour to visit the Neon Museum during certain hours. Here’s what they said

“We have found ourselves turning away hundreds of visitors a week due to tours being sold out days in advance. This, frankly, is not acceptable.”

What has now happened is that during the hours of 9-4pm they offer self-guided tours for $19. You won’t learn about the signs in the way as you would on the organised tour, but you can go in and see them.

They also now offer nighttime tours seven nights a week – they only used do them at weekends.

The random old letters scattered around the place are probably my favourite thing – I love searching out the H’s and have more than one selfie in front of one! 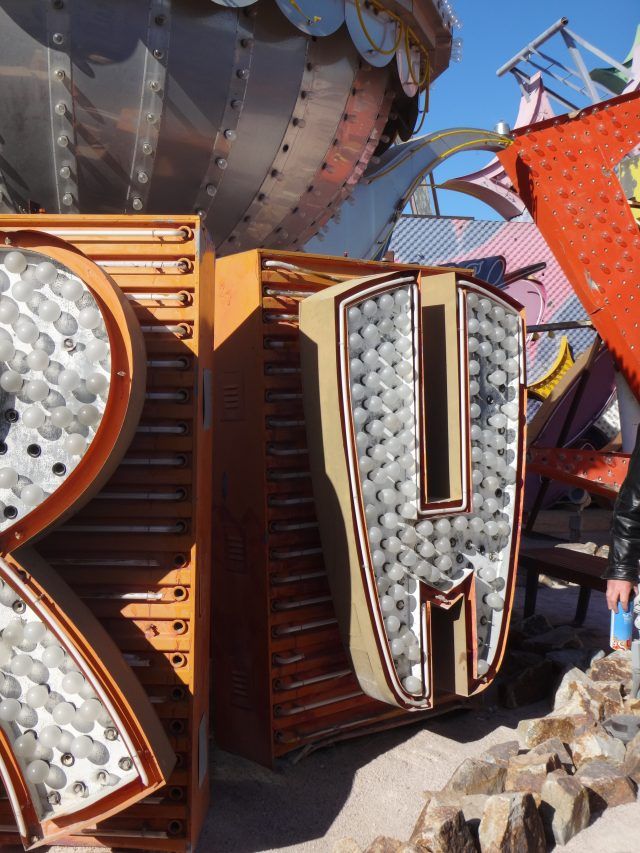 They also don’t only have signs from the big casinos.

There’s old motel signs, signs for bars, car washes and dry cleaners and the mix makes for a fascinating look at history. Although, I admit the dry cleaners was Steiners whose claim to fame is that they cleaned the costumes for Liberace and Elvis so, it’s not just your average mom and pop laundrette! 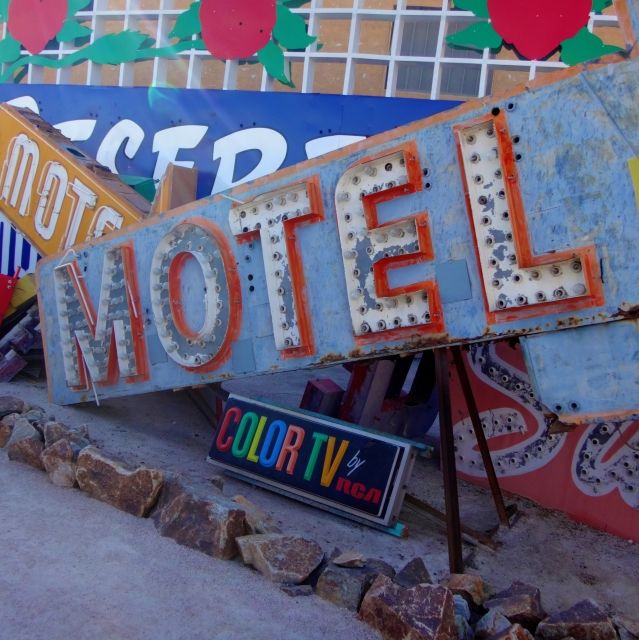 It’s just incredible, it’s also really hard to get a full picture of as it’s huge. It’s even harder to get one without the other people in your tour on it. But I managed it – the big silver lamp next to it came from the Aladdin Hotel. 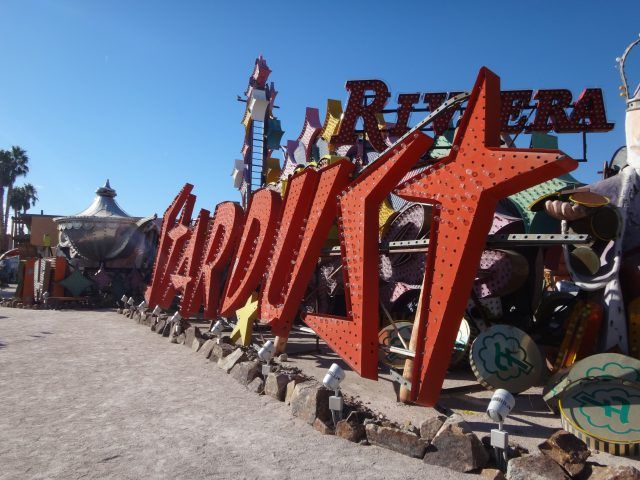 You can see some of it from space

The giant pirate skull in the middle of the Boneyard (that’s its teeth below) came from the Treasure Island Hotel where it used to be part of a huge sign on the Strip. It’s so large it can actually be seen on satellite images on Google Maps – and I particularly love the fact that they’ve left it facing up so it looks super spooky if you do happen to be looking via satellite! 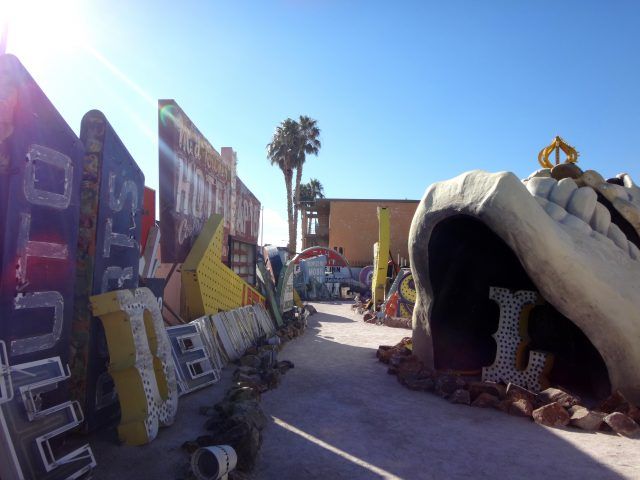 This was the first hotel I ever stayed in in Vegas – at the time they had this sign hanging up outside. Which I admit makes me feel a little bit more ancient than I might like! 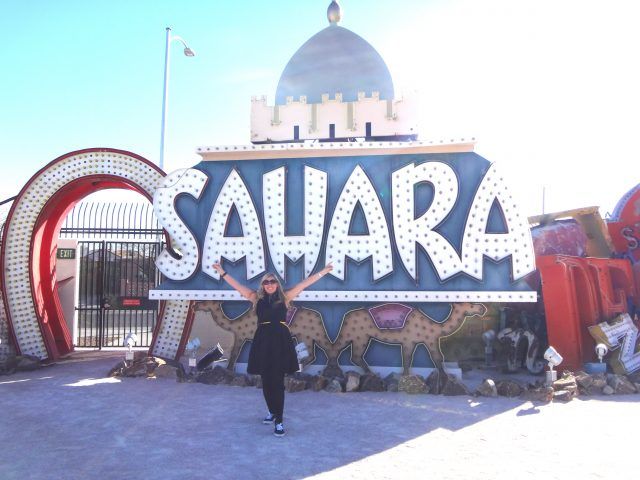 One of the oldest hotels on the Strip, the Sahara was once famously frequented by the Rat Pack. When I went it had lost a little of its gloss and its main claim to fame was a rollercoaster called Speed which ran under the sign!. The hotel donated the sign to the museum in 2006.

I’m not the best photographer in the world, by any stretch of the imagination, but I came back from the Neon Museum with so many photos that I loved. And, even though you have to view the signs on a guided tour with other people, I found heaps of space and time to take photos that looked like I was the only person there simply by pointing my camera back the way we just came!.

If you do want to get a bit more serious with your snaps though, they do offer specialist photo walks which allow tripods and a bit more time to get that angle you really want. 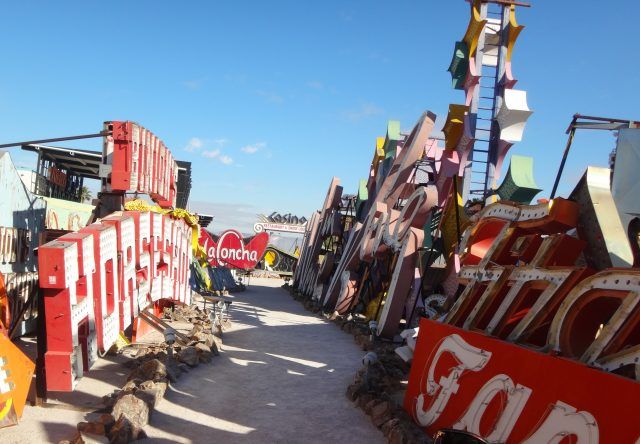 And the last reason why I love the Neon Museum. They let you see some signs for free

The Neon Museum has also restored nine signs to their full glory and put them outside the museum on a stretch of Las Vegas Boulevard for everyone to enjoy – something they call the Las Vegas Signs Project.

These signs include the fabulous Silver Slipper – which, I still remember the model in that original magazine feature standing by. Admittedly, they have just changed the colour of this to it’s original black and gold making my picture a tad out of date, but i’ll forgive them.

If you want to find them you’ll find a tour map here that shows you where the signs are located. 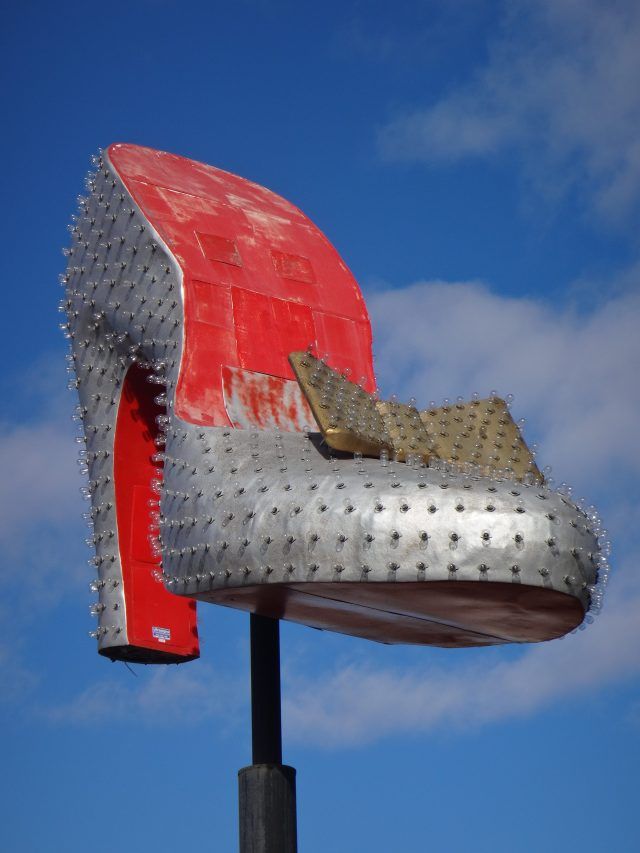 So, would I recommend you book a tour – or just turn up?

I guess it depends on your goals. If you just want to see the signs, get some photos and tick it off your bucket list, then the new General Admission tickets are a fantastic idea. I loved learning about the signs and I certainly wouldn’t know as much about them as I do know without taking the guided tour – although apparently, there will be people around to answer any questions to those on General Admission tickets.

Personally, I’d still suggest booking general admission tickets on the site in advance if your time in Vegas is limited as there’s still only a certain number available per hour. And because the museum is a bit out on its own, it’s probably better to know exactly when you need to be there.

I’m not sure the news that you no longer need a tour has quite filtered out yet, but once it does, I get the feeling these tickets will be as popular as the tours once it did.

You’ve also got to decide whether you would prefer to see the signs during the day or at night.

Personally, I wanted to see the less shiny, shiny signs. The ones that are still a bit dog-eared and faded like these below and so when I went a daytime tour was better from me. But from what I can work out, though there aren’t any daytime tours right now and Guided Tours start at 6pm.

I’m not sure how they’ll change things as Vegas goes into winter and it gets dark early but the website is very simple to use, so check things out on there when its time to book

Note: There are some rules about what you can take to the Neon Museum so do check these in advance whichever you choose. 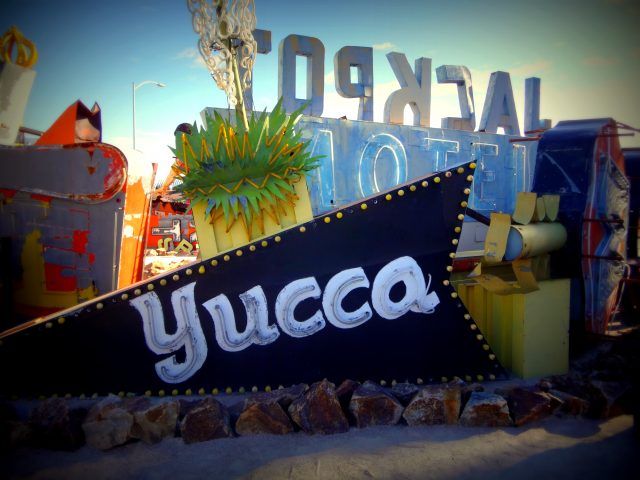 The address of the Neon Museum is 770 Las Vegas Blvd. It’s at the far north end of the strip. It’s easy to drive to and has free parking. As we didn’t yet have a car when we visited we got a taxi from one of the Strip Hotels. The closest you can reach it on the Deuce Bus that travels up and down the Strip is the Mob Museum. It’s about a 12-minute walk from there but I’m always a bit wary of walking away from well-trodden streets in Las Vegas so if you can manage to spring for a cab then I would.

Want to Learn More Vegas History? Then why not also try one of these walking tours?

Where to Stay in Las Vegas

I’ve stayed in a lot of hotels in Vegas – some good, some bad, some now knocked down and with signs in the Neon Boneyard – but on my last trip we stayed in the Vdara. It’s toward the southern end of the strip, close to the Bellagio, the Aria and the Cosmopolitan.

It doesn’t have its own casino, but it is smoke-free and dog-friendly which made for super cute fun every morning around the coffee shop. We mostly chose it though because the rooms were enormous. Even the cheapest category of rooms, the Studio Suite, was huge at 54sq metres.

If you’re looking for other cool arty things to do in Vegas, check out my post here which talks about a new installation called Seven Magic Mountains and where else you’ll find art on the strip. 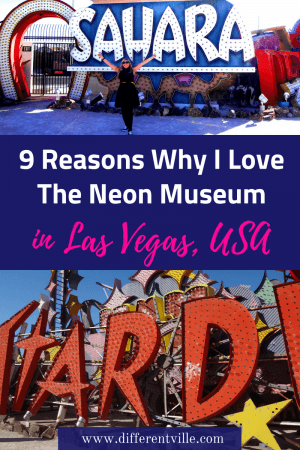