I might have seen the Rocky Horror Picture Show one or two (hundred) times but despite the fact that I can pretty much recite it word for word, I had totally forgotten that writer and star Richard O’Brien had a link to Hamilton in New Zealand – until, a couple of weeks ago, we drove into the city in search of breakfast and encountered an enormous Riff Raff statue in the middle of town.

‘OMG. Park. Find a Park,’ I yelled at my now very bemused boyfriend as, up until this point I had been moaning about stopping in the city at all. But little did I know then, that there was a pilgrimage to be made. 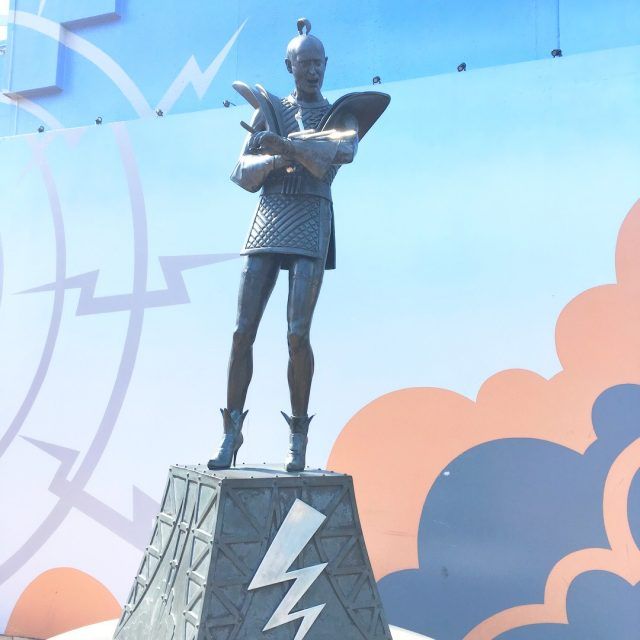 Who on Earth (or elsewhere) is Riff Raff?

For those not up on their 1970’s movies, The Rocky Horror Picture Show is the story of Brad Majors and Janet Weiss (slut) who are travelling on a dark and stormy night to tell their old professor about the news of their happy engagement.

Their car gets a flat tyre and because Brad is hopeless he hasn’t fixed the spare they’re stuck in the rain and dark – but thankfully there is a large house just up the hill, surely whoever owns it has a phone they can use?

I won’t spoil the rest of the movie, but what follows is a festival of singing, dancing, over-the-top hairdos, corsets, gold shorts, fishnet tights, sexual ambiguity and an entire generation of people who can’t help but reply to the words ‘It’s just a jump to the left’ with ‘and then a step to the right’ – with actions. 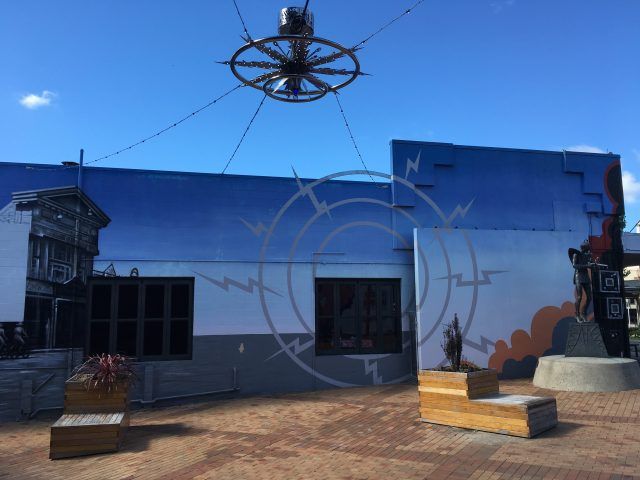 Rocky Horror was a huge part of my teenage years, it helped me realise it was okay not to fit in (in fact, it was AWESOME not to fit in) – and I still watch it now and again.

And yes, I am spotifying the playlist as I type!

Richard O’Brien who wrote the show and starred as butler Riff Raff moved to New Zealand as a child and, for a while, worked, cutting hair, in the town of Hamilton, New Zealand.

In honor of this, November 2004 saw a statue of his most famous role put on the site of the old Embassy Theatre where the Barber Shop O’Brien worked in had been located – but now, the city has added to the Riff Raff statue and gone Rocky Horror crazy! 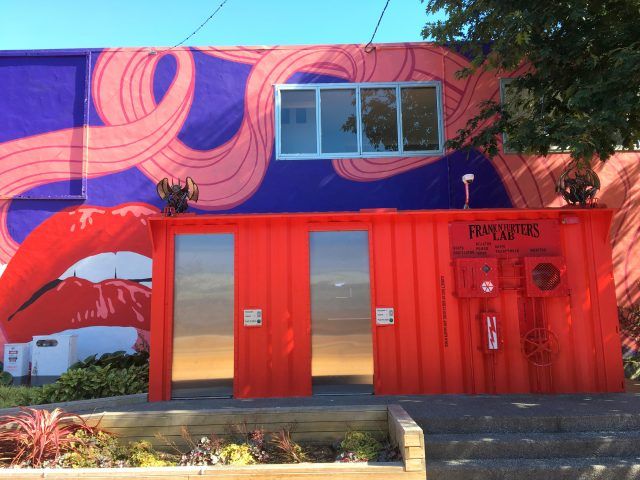 It All Started With a Riff Raff Statue…

Once we’d found a parking space I virtually ran down Hamilton’s Victoria Street to meet Riff Raff. But, what I hadn’t appreciated was that surrounding the Riff Raff Statue now is an entire Rocky Horror themed square.

It was upgraded to make it even more of a feature in 2016, The public toilets are bright red and based on Frank’n’furters Sonic Tranducer – complete with buttons to press and wheels to spin. 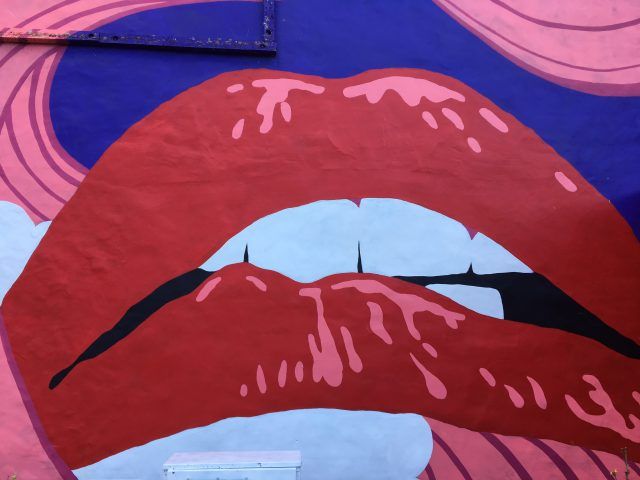 My favourite bit though was down a path just out of the square where I came across the words of Riff Raff’s solo part of a song called Over At The Frankenstein Place – one of my favourite bits of the soundtrack. it was a such an uber fan moment, I couldn’t quite contain myself. 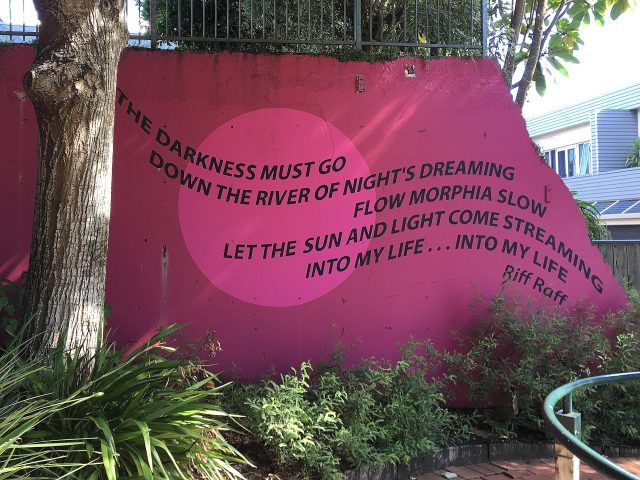 If you’ve never seen Rocky Horror none of this will make any sense, but if you have (and love it as much as I do) this place was just incredible.

I’ve just discovered that the statue actually has a webcam (to catch people doing the Time Warp outside) and I can only imagine what I might have looked on the thing like running around the whole thing with a look of abject glee on my face.

Thank you, City of Hamilton and the Riff Raff Public Art Trust for making this Rocky Horror fan’s day.

Other Things to Do in Hamilton

Hamilton is an easy 90-minute drive from Auckland – and it’s a convenient stop on the way to tourist hot spots Rotorua, Taupo or the Waikato.

Despite how near it is and the fact that I lived in Auckland for six years (so check out my local’s list of quirky things to do there), I had never actually been to the centre of Hamilton until this moment. I’d driven through it on the outer roads but didn’t appreciate how cool the centre of town was.

It’s jam-packed with bars and restaurants (although as we were there at 10am on a Sunday not many were open) and there’s a gorgeous river running through the middle. I was only there a couple of hours so this is by no means an exhaustive list of things to do in Hamilton, but here’s what else we did after visiting the Riff Raff Statue – plus some other cool sounding things we didn’t have time to check out. 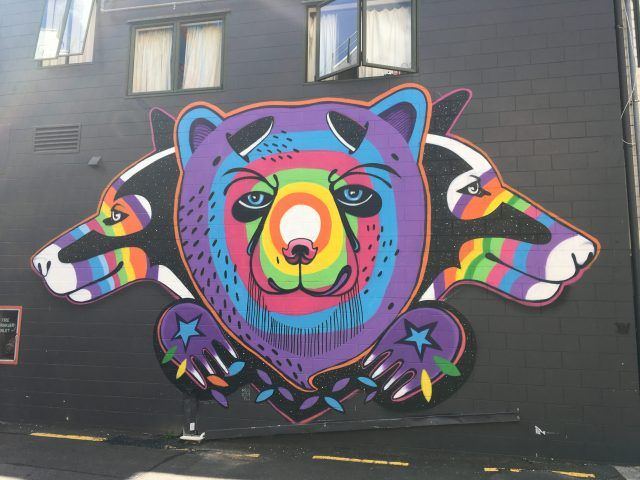 2. Wander along the river: it’s really pretty and tranquil. If you don’t have time to wander, you can at least see it from the Victoria on the River square.

3. Visit Hamilton Gardens. This is free and contains gardens themed on parks and plants from around the world – it’s amazingly pretty particularly considering it used to be a rubbish tip. Here’s where to check the opening hours and full details on what you might see.

4. Play with a Lemur: One of the face to face encounters on offer at Hamilton Zoo is to meet lemurs. I really wanted to do this but didn’t have enough time…so I guess I need to go back.

5. Have some chilli bacon at Momento Espresso. After I’d run up and down Embassy Square squealing plus wandered around all the street art and the river I was quite hungry so we headed off to breakfast at Momento on the corner of Hood and Victoria Streets.

They cure their own bacon here and the menu told us they had made a chilli one so, we decided to go for the Bacon and Egg sandwich to show it off.

It wasn’t the spiciest thing I’ve ever tasted in my life, but otherwise it was pretty good – but the sandwich itself is seriously hard to eat. Use a knife and fork. 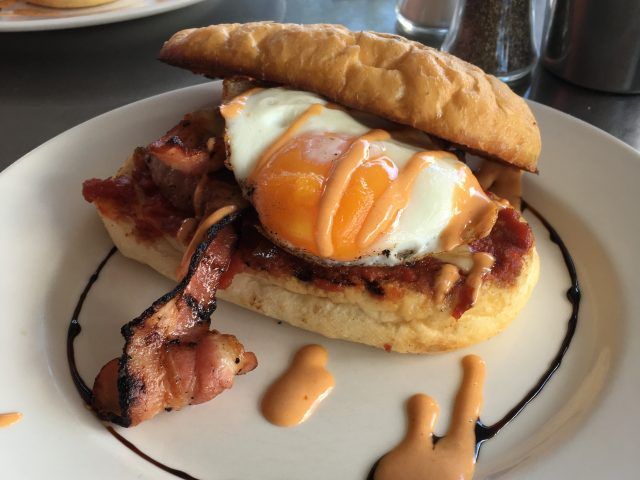 So, as I say, I only had about two hours in Hamilton on our way to the fascinating town of Tirau so I know I’ve missed heaps of other fun and quirky things to eat, see or do – so, if you know the city, what did I miss? Let me know in the comments. I will be back there at some point I’m sure so it would be great to be armed with an itinerary.