Cake isn’t really my favourite thing – but when that cake comes adorned with the designs of Vivienne Westwood, I can make an exception. Cue my beeline to the Vivienne Westwood Cafe in Hong Kong to overload on fashionable sugary stuff. 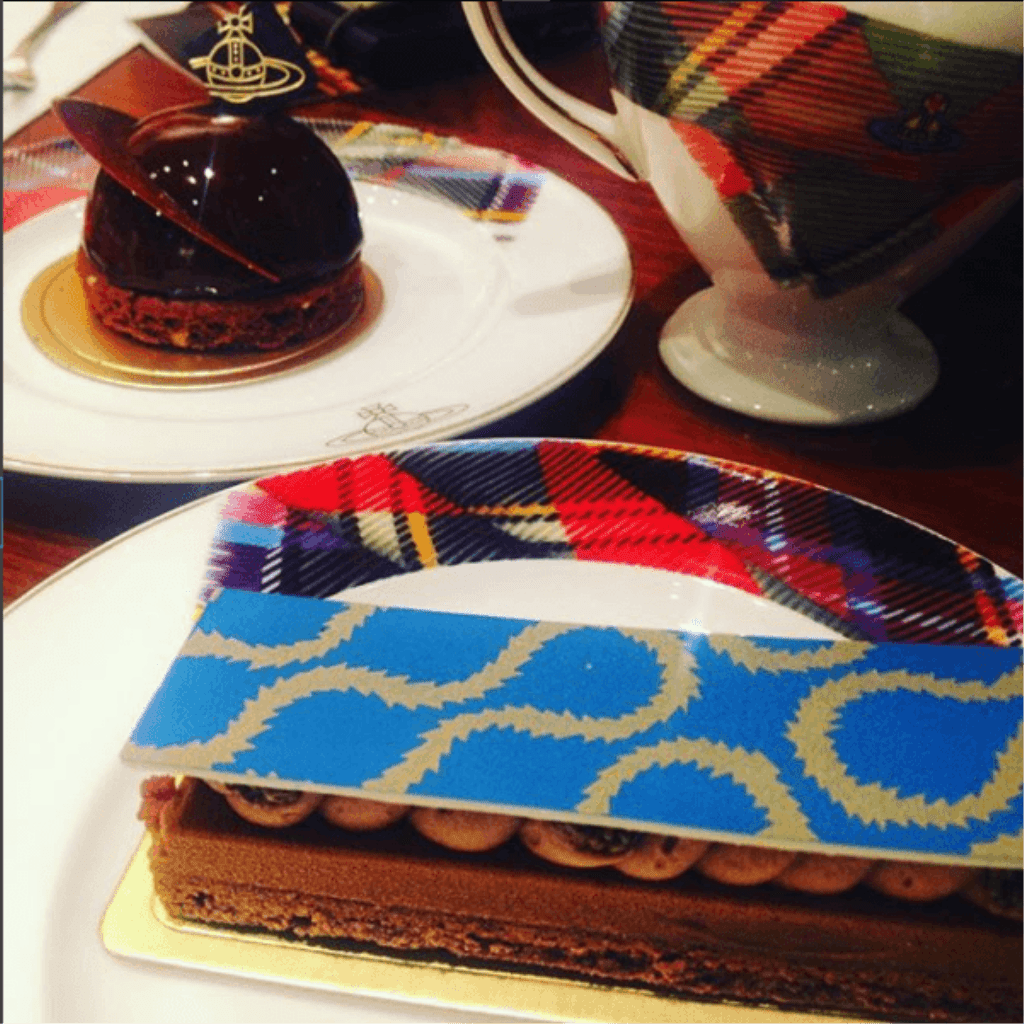 Why I Had to Visit The Vivienne Westwood Cafe

Once upon a time, a long, long time ago I was quite fashionable. A tad freaky yes, but fashionable.

I’d sashay down my local High Street wearing a corset top with that shoved my boobs up to my neck and a skirt that looked like a lampshade. I saved all my hard earned cash to buy anything imprinted with one magic symbol – the orb – a sign that whatever you had on (t-shirt, cardigan, watch, whatever) was made by fashion designer Vivienne Westwood.

As I got older my life got more sensible and eventually, I relegated my Westwood collection to my mother’s loft. The only hint of it was that I still carried a Westwood purse – that discreet orb that came out every time I bought another tea dress in Dorothy Perkins reminding me that rebel was in there somewhere even if I didn’t let her out.

♥ READ MORE: Getting Our Fluffy Fix at Bangkok’s Unicorn Cafe ♥

When I decided to move back to Sydney last year though, my mother gave me an ultimatum; the clothes in the loft either had to come with me, or they had to go. My house here is tiny, the moths here are huge – it wasn’t a combination that was ever going to end well. It was time to sell my clothing.

They went up for auction a few months before I left – but, despite this, I wasn’t quite ready to say goodbye to my era of Westwood adoration just yet.

You see our one-way flight to Sydney went via Hong Kong – and, here, in one of the swanky shopping malls the city is so famed for was my last place of pilgrimage…The Vivienne Westwood Cafe. An entire eaterie adorned with Westwood-themed munchies. Forget the Symphony of Lights or the red-sailed boats bobbing beautifully around the Harbour, this was my must-stop in Hong Kong. 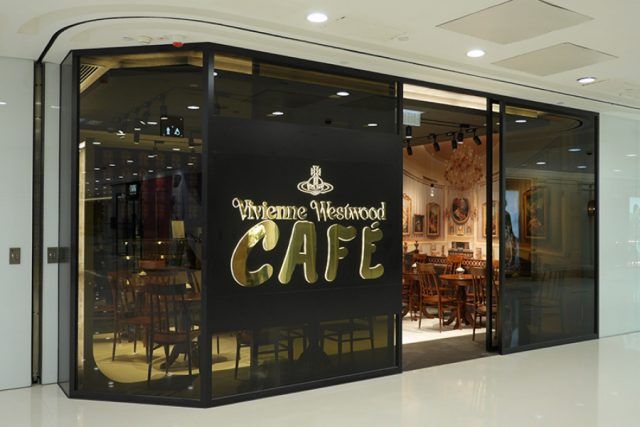 We spent the morning wandering –  went a trip to the flower market, had a wander around the quaint Yuen Po Street Bird Garden to see the local men proudly showing off their caged birds. took a million pictures of fruit in the market, lunched on some noodles and then it was time. The Vivienne Westwood Cafe was calling.

I spotted it immediately by the huge gold orb on the wall – a bit like the mothership calling me home. I walked in expecting to be ensconced in a sea of squiggles and orb-filled fabulousness. And emitted a most disappointed oh…

You see, the Cafe is split into two halves when it comes to inspiration – the part you first walk into is supposed to look like backstage at a catwalk show but without half-naked models rushing round it in a sea of cigarette ash and panic it just looked like a plain white room.

A glance to the right saved things though. This area is supposed to remind you of an 18th-century French tearoom, and oh yes, the chintz factor is high with this one!

Admittedly, it’s chintz with meaning – the wallpaper is based upon the Wallace Collection in London which is Westwood’s favourite museum and the paintings are a style she uses a lot in her designs. Not being a fan of 18th Century France though I sat in the white bit where I didn’t feel someone was about to wander past in a powdered wig!

And Then There Was Cakes – Vivienne Westwood Cakes

My decor doubts disappeared when I reached the cake counter. This was better. Everything here is adorned with the patterns of Westwood’s famous prints – there’s squiggle pattern cakes, tartan china, the ice cream has little edible orbs on it – and as for the stand the afternoon tea comes on – I’m pretty sure I wore part of that as a necklace in the 80s! 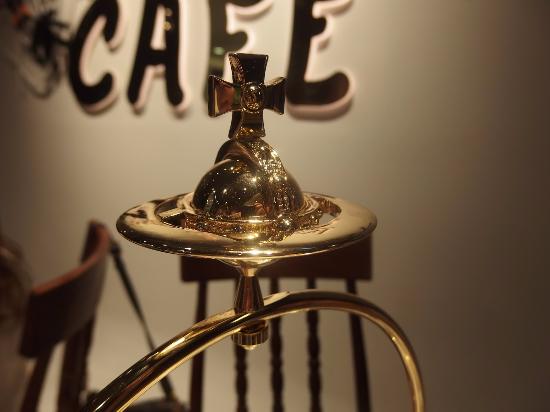 This photo of Vivienne Westwood Cafe is courtesy of TripAdvisor

What did I eat?

As much as I would have liked afternoon tea as it had a myriad of fabulous things to pick at, at 500HK, it was a bit pricey for a meal I didn’t need and so I just had to make do with one single pretty cake.

The choice was difficult. The heart-shaped cakes reminded me so much of the red and black hunting jacket I wanted so badly when I was young but couldn’t afford. Eventually, I picked a vanilla confection with a blue and gold squiggle on the top.

Of all of Westwood’s designs, this was the most iconic when I was growing up and it reminded me of my best friend who’d I’d said goodbye to a few weeks before. Cue immediate emailing of pictures to make him jealous!

We also got a gooey chocolate mousse cake just because it had a gold orb on top!

The cakes cost 55HKD (about £5.50 or AUD$9) each which was the smallest amount I’ve ever got away with spending in a shop with Vivienne Westwood on the outside.

The Vivienne Westwood Cafe is not somewhere you’d go if you aren’t into Westwood, or fashion per se, but for me it was the perfect place to spend half an hour as I swapped an old life in London for a new one in Sydney.

Where to Find the Vivienne Westwood Cafe in Hong Kong

It’s in Ocean Terminal Building of Harbour City – the official address is 27 Canton Road, Tsim Sha Tsui. The cafe itself is on the 3rd floor, right next to the Vivienne Westwood shop.

On the map of the building, it’s shop number 305a – my Vivienne Westwood homing device found it using that no problem. If you get disorientated head toward the huge Lane Crawford department store. Stand with your back to it then and then walk straight up the corridor in front of you, The cafe is about six shops up on your right.

Hope you enjoy it.

If you do, all your cakes become calorie free for a week. 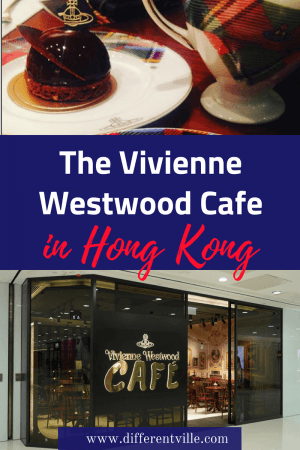