About a two and a half hour drive from Auckland on New Zealand’s North Island is the Putaruru Blue Spring. A pool and river so pretty it looks like a swimming pool for fairies. Here’s everything you need to know to discover it yourself including how to get from Auckland to the Blue Spring. 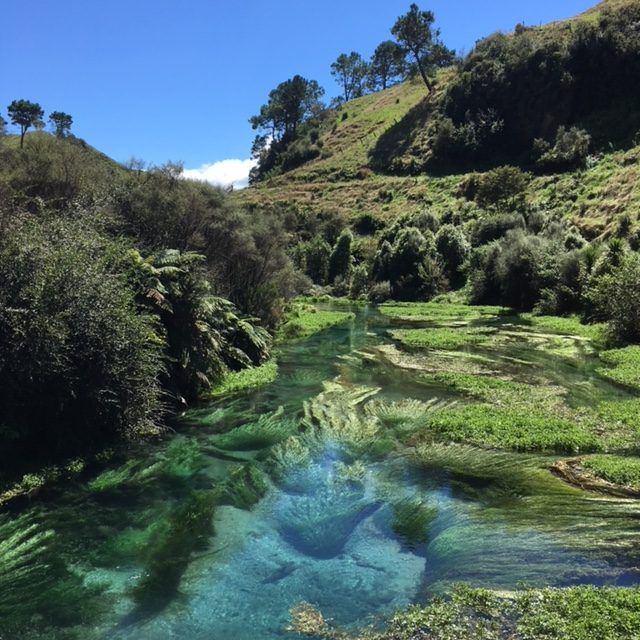 I have a soft spot for Auckland, I lived there for six years – but I admit, it’s not a city most people travelling to New Zealand hang around for long. But, if you don’t have time to do the whole tiki tour around the islands, I’m going to argue that – with a bit of hunting for cool things to do and a few easy day trips from Auckland – you can easily stay a week or more in the city and have a fantastic time. And, if you do, the Putaruru Blue Spring should definitely be on your must-see list.

What is the Putaruru Blue Spring?

It’s the most beautiful,clear, bright blue pool in the middle of the North Island’s Waikato region.

About five kilometres from the town of Putaruru, the Blue Spring’s first claim to fame is its purity. In fact, if you’ve drunk from a bottle of water in New Zealand, chances are you’ve already had an encounter with the Blue Spring as it’s pure, clear water provides the source of about 60-70 percent of NZ’s bottled water.

The second claim to fame is its colour. Starting deep underground it takes 50-100 years for the water that makes up the Blue Spring to reach ground level. As it trickles through the earth, particles that can interfere with clarity and vibrancy are absorbed and the end result is a pool of water that is transparently clear but when sunlight hits it turns a bright turquoise. 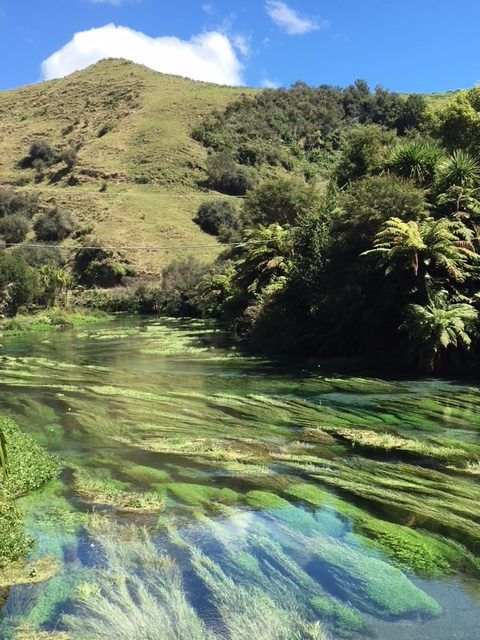 But nature didn’t stop there with the prettiness in the pool itself, either side of the Blue Spring Putaruru, it added transparent rivers lined with frilly underwater plants that stream out like mermaid hair as the water flows over them. Not content with that, it popped in a few ducks and a family of pukeko, a super-cute bright blue bird with a red beak, to float around on the top and, plonked the whole lot in a fern-filled canyon.

This post could have 47 pictures attached to it, I was so busy snapping away – the good news is it doesn’t, but I’ve dotted a few around to show you just how stunning the area is. None of them has been altered in any way – and I still don’t think they completely do it justice. 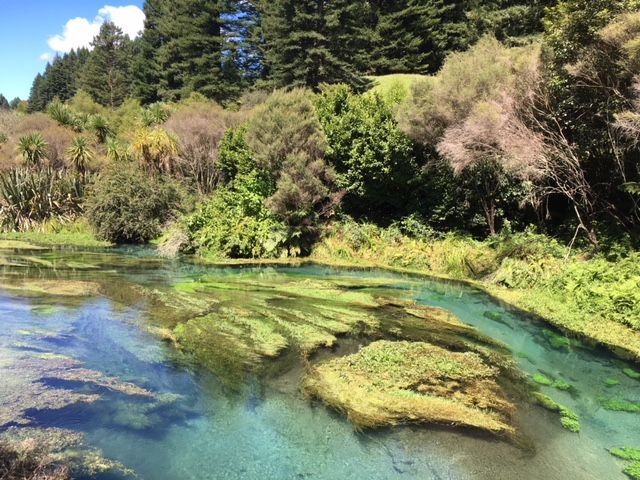 The Te Waihou Walkway – Gateway to The Blue Spring

The drive south from Auckland to the Putaruru Blue Spring takes 2 hours and 20 minutes mostly along State Highway 1. It’s a paved road the whole way (which isn’t always the case when trying to find beautiful things in NZ) and so you won’t be breaking any rules doing it in a rental car or van.

However, as with most cool things in New Zealand, you can’t just drive up to The Blue Spring – it takes a bit of a walk to reach it. How long a walk depends on which end of the Te Waihou Walkway – the path that takes you to the spring – you enter to reach it.

There are two entrance points to the Te Waihou Walkway. One on State Highway 28 which is 4.7km long and takes an hour and half to walk to the centre point of the spring (don’t forget you’ll need to go back the same way to pick up your car) and Leslie Road which is just a 10-15 minute walk from the car park to the Spring – then back again. This might be more suitable if you’re on a day trip from Auckland and want to see a few other things en route as well.

For that reason, the Leslie Road entrance is the one we chose. It’s a slightly hilly walk and the track is covered in small stones but I still did it in flip-flops and people were up there with pushchairs (though you do have to lift them over a high gate) so its certainly not Bear Grylls style bushwalk.

The other part of the Te Waihou Walkway is a bit more rural and does, apparently, requires climbing a few stiles and things so best pack the good shoes if you want to go that way. 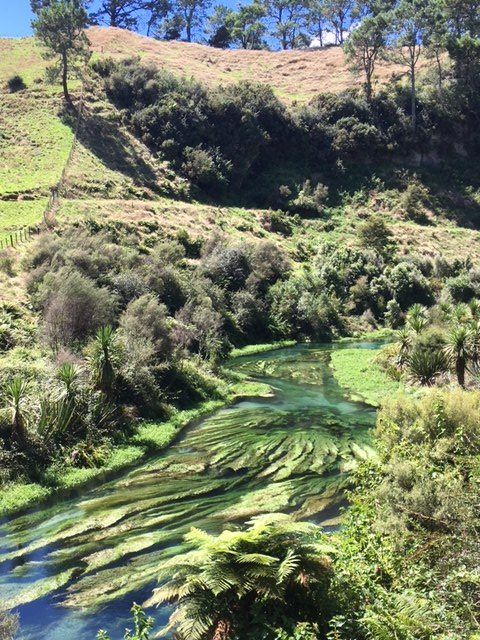 What To Expect When You Get There

The first water viewing point you get to on the Leslie Road end of the Te Waihou Walkway takes you down to a small bridge that crosses the stream, on the day we went this was the bluest part – and also had those cute pukeko floating around. This isn’t the Blue Spring itself – that’s another 300 metres away

You’ll know when you get to the spring proper as it has all the seats and official viewing platforms its status demands. The Blue Spring itself bubbles to the surface in that blueish pool right at the back of the picture below – as I said, the day we went, I actually felt the river leading up to the spring looked more magical than the spring itself – and this next paragraph might explain why. 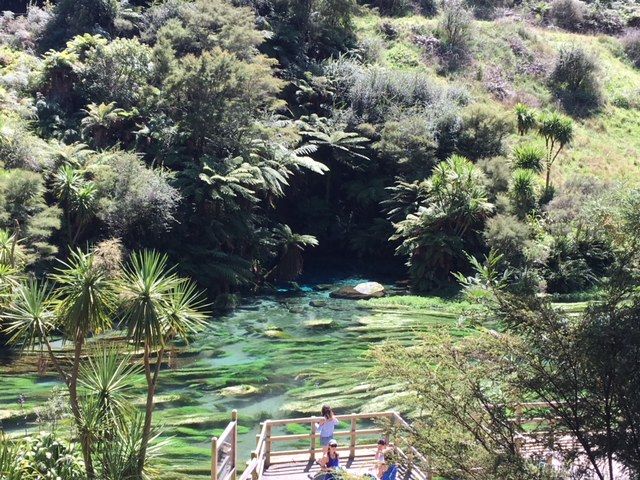 Can you Swim in the Blue Spring Putaruru?

Not anymore. Even just a few years ago, the Blue Spring was a bit of a local’s secret, but thanks to the magic of the internet the secret is now out and what was only visited by 10,000 people a year can now have up to 9000 visitors in a month in high summer – many of whom were leaping in.

I don’t blame them, it looks so appealing even if it is a frosty 11 degrees. However, after a particularly busy summer in 2016, experts noticed damage starting to occur to the vegetation in and around the Spring and they discouraged swimming – now, they’ve gone one step further and there are signs everywhere saying it’s closed to swimming. Swimming is only allowed at the beginning of the longer track near White’s Road.

It’s a good thing – looking at pictures from 2014 and the Spring now the main pool is not quite as beautiful as it was – although, wandering down by the bridge (where the below pic was taken) is still magical.

If stopping people swimming in the Blue Spring itself restores it back to magnificence, I’m all for banning it. 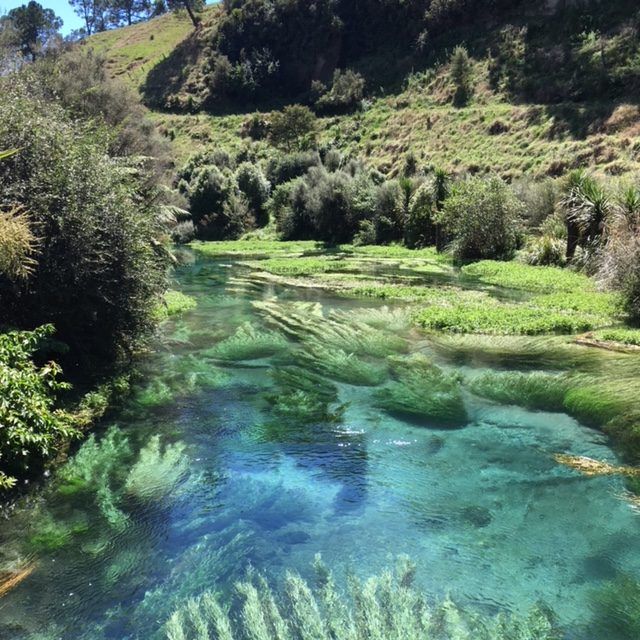 Can You Visit The Blue Spring on a Day Trip from Auckland?

Yes. We did. We left Auckland at 9.30am, stopped off at Hamilton, roughly 90 minutes away, for brunch and a wander around a few cool street art finds. We then drove another 45 minutes to the Spring arriving at about 12.30.

After an hour of walking and taking all the pictures, we then drove 15 minutes north to the nearby town of Tirau, a place obsessed with corrugated iron signs and statues. This was supposed to be the main point of our day, the Blue Spring was a bit of a detour, but while Tirau was cool, the Blue Spring was incredible.

We left Tirau slightly before 3 pm and were back in Auckland just after 5 pm.

Sadly, we didn’t get to visit Putaruru, the town that gives the Putaruru Blue Spring its name, but if you have an extra hour or two in your day, take a detour here as well. Putaruru has a cute-looking mosaic walk with 32 mosaics around the town that I’d love to have seen – and the nearby Arapuni swing bridge definitely looks worth a trip if you’re okay with heights.

If you are travelling around New Zealand, you can also easily do a stop off at the Blue Spring on the way from Auckland to Rotorua as it’s close to State Route 5. It’ s also an easy stop on the way to Lake Taupo.

If you don’t have a car, a number of companies now offer tours to the Blue Spring – often alongside other attractions like Hobbiton or Roturua – from Auckland, Hamilton and Raglan.

I had no idea what to expect when I visited the spring, but I think it’s one of the most beautiful things I’ve ever seen – and absolutely the most stunning river. If only I’d seen a few paddling fairies as well.

Where to Stay in Auckland

If you do decide to stay in Auckland, there’s a heap of hotels to choose from, but for this trip, they were all astronomically expensive and so we turned to Airbnb and found the most amazing apartment for a third of what the hotels wanted. 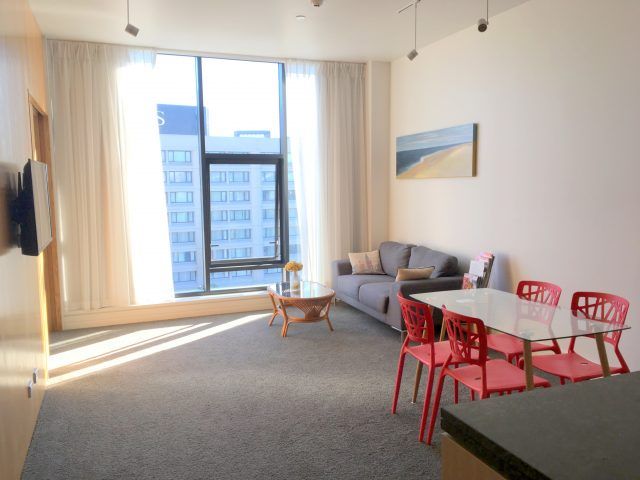 It was up near K Road – a formerly grungy but increasingly trendy area at the top of the city. Stay here and you’re surrounded by cool bars and inexpensive restaurants.  And don’t worry that you’re not in the CBD – it’s a quick walk downhill to everything you want to see and, to get back up is either a short hop on the Link bus that costs a dollar or a $6-10 dollar Uber ride. Another bonus, the Skybus from the airport stops virtually outside. Check it out here. 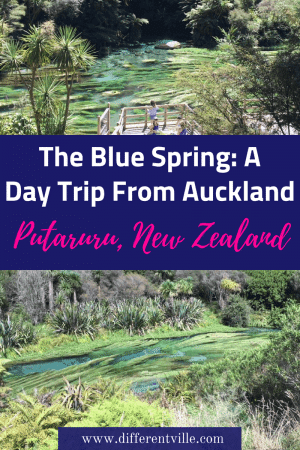