One of the (many) highlights of my recent trip was a walking tour of Perth by a lady called Adie at Oh Hey WA tours… we searched for the coolest Perth street art, learned about Perth history, and I learned more about Perth in the two hours I spent walking with Adie than I had done doing hours of research online. But should you book this Perth walking tour too? Take my clever test to find out… 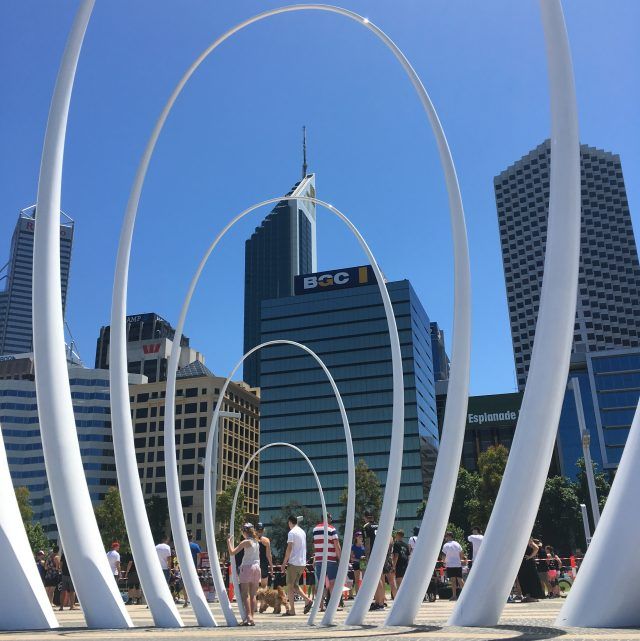 Before we get to my clever test though, let’s start with some background…

What do you see on the Oh Hey WA Tour?

Well, to start with, the tour takes in most of the main sites you want to see on a visit to Perth. You wander around the CBD checking out the old buildings, take a stroll through the exotic plants and giant roo statues of Stirling Gardens and visit the newly-rebuilt and nicely swishy Elizabeth Quay including a good look at the super-pricey Spanda sculpture above – but what makes the Oh Hey WA walking tour of Perth special is the less obvious things you’ll see, like this tree. 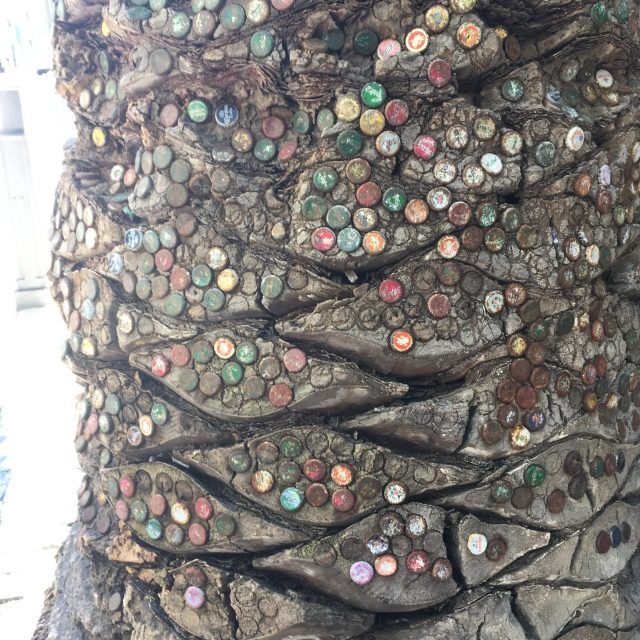 Look at it – it’s totally studded with bottle tops. I’m supposed to be good at spotting weird stuff like this, but I walked straight past it until Adie told us to stop and look closely. For the two hours of the tour, my ‘wow, that’s awesome’ brain cells were firing on all cylinders taking in quirky sights and intriguing facts.

Later that day, as I drove through the city with my friend who lives in Perth I kept saying ‘did you know that…?’ and following it up with some bizarre fact about whatever we were going past – and no, she didn’t know that the arrows on top of the town hall were, apparently, added by the convicts that built it as a nod to their uniforms – or the other things I threw at her.

Why You Should Never Trust First Impressions

The fact that I had a blast is even more strange as, at first, I wasn’t even going to book this tour.

I was looking for a straight Perth street art tour and the name of the Oh Hey WA tour I booked was the Art and Cultural Tour. I was a bit worried that it was, therefore, going to be slightly stuffy and far more history focused than I wanted.

I dithered about a bit, looked at a couple of other walking tours in Perth, but the fact that the tour started right by the Airbnb I was staying in swung it and so spent my $40 (that’s the solo traveller price, it’s slightly less if there’s more than one person booking) and booked myself a slot for the next day. 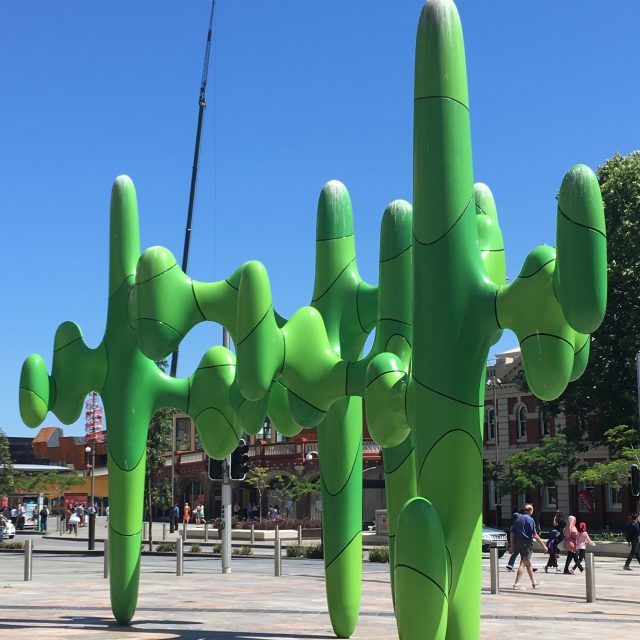 It began in Forrest Place right by Perth’s main station at 10 am. On the face of it, it’s not the most exciting square in the world – yes, it’s home to the $1 million giant green cactus sculpture by James Angus  (above) which I rather love, but other than that, the focal point, the old General Post Office has turned into a giant H&M which meant I kind of glossed over it on the interesting front. Adie however, knew differently…

As I’ve said before on here, I find it hard to review walking tours. To determine if it’s a good idea to spend two hours of your life following this person around you need some clues as to what the tour includes, but give too much away and it spoils the fun, so, for this tour review I’m going to pose a few questions – and, if you’re intrigued to know the answers, you’ll definitely be happy you booked with Oh Hey WA. Yes, that’s the clever test!!!

So, taking us back to that slightly dull looking square, Adie draws our attention to the Aussie coat of arms on one side of the building and asks…

Q: What’s odd about the Coat of Arms on the old Post Office?

If you’re not familiar with Oz heraldry, the Aussie coat of arms includes two animals – a kangaroo and an emu. They’re chosen because they can’t go backwards – symbolising Australia’s status, at the time, as a new forward-thinking nation.

Here, however, there’s something not quite right about the famous symbol, something to do with the kangaroo’s head – and Adie told us a fascinating story about why it’s thought to be the case.

We then wound our way through a shopping mall to Perth’s main street (another thing this walking tour is good for is teaching you shortcuts, I used this one about four more times on my trip) and ended up in front of this rather incongruous structure. So, my next question is…

I knew it looked familiar, but I couldn’t place it – and even after Adie told us, I had to go back and google the original to see how similar it is. It’s somewhere I’ve walked past literally hundreds of times – and if you’ve been to London there’s a good chance you’ve seen it too as it’s a truly iconic building – and here it is again, in Perth! 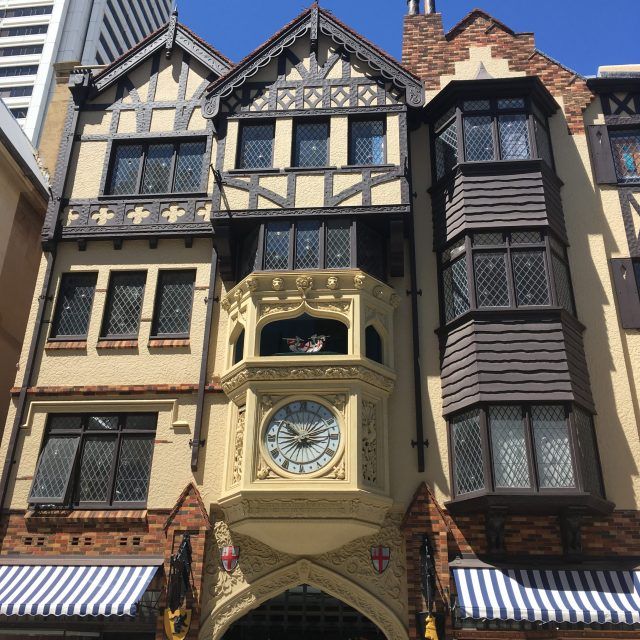 This was built in 1937 by a wealthy gold miner to cheer up the British in Perth. He figured seeing something that looked like Tudor England would make them feel more at home!

As a Brit, it’s a really odd place to walk through – it absolutely feels like you’re wandering around Holborn in London (which is not the answer to the question above by the way!) but the sky is bright, bright blue rather than the grey you’d expect if you actually were in the UK! Try it, it really will mess with your head a bit!

Q: Do you want to see this mural?

Perth is now full of murals and smaller installations by local and international artists and while I had wandered around finding a few of them when I arrived the day before, I wanted to know a bit more about the artists involved, and maybe find a few pieces I hadn’t researched myself. And the tour definitely fulfilled that request. 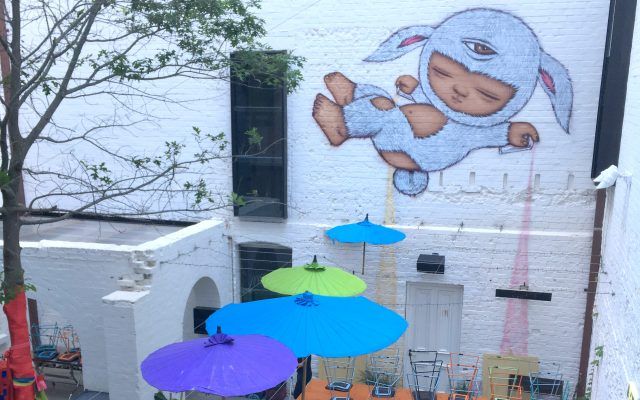 This piece, by a Thai street artist called Alex Face, was on my ‘must see’ list. I knew it was in a Thai restaurant called Longchim…but do you think I could work out how to actually get into the restaurant once I got there? Nope. Not happening, couldn’t find the door.

I walked round in circles for a good few minutes before giving up – but it then turned out to be one of our stops on the tour which made me extremely happy.

We also went to Wolf Lane which is the mecca of street art in Perth. This was where having a guide came in super handy to explain what certain pieces meant and point out a few details we might have missed. I still don’t think I took in all the things Wolf Lane had to offer and I really wanted to go back.

Even if you don’t want to take any kind of Perth walking tour to take you there, if you’re into street art Wolf Lane is somewhere you need to visit.

The influx of street art is one of the city’s ideas for reviving the laneways of Perth. With small bars and restaurants springing up down back alleys, you want to encourage people to walk down them.

Normally, however, asking people to head blindly down some alley goes against their natural sense of self-preservation – after all, what happens if the one you wander down doesn’t have a cool mural or a bar down it, but three blokes with a baseball bat?

The answer, in Perth at least, is that you look for the secret sign that gives away the fact that there’s something cool down there – and, the Oh Hey WA tour will show you what it is! 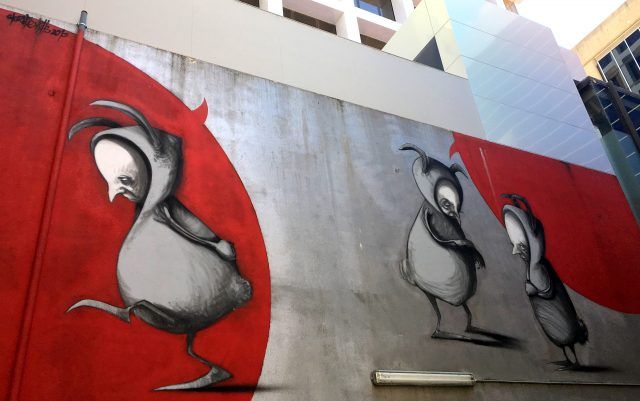 Following one of these signs took us to this Stormie Mill’s piece which I think was my favourite of all the cool street art we saw – although I have absolutely no idea how to find it again!

Knowing the ‘secret sign’ also gave me a heads up as to which alleys to go down when exploring on my own later on my trip – and which wouldn’t be worth detouring for.

And, last question…Where would you find these tiny mice?

Look at them, how cute are they? And thousands of people walk past them every day probably having no idea they are there. But now, thanks to Adie and Oh Hey WA, I do. 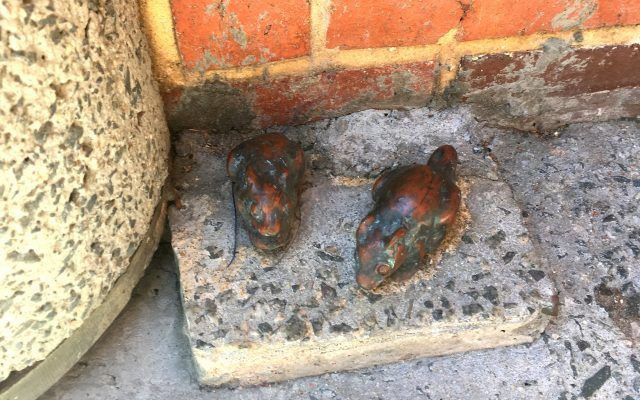 Where to Book the Oh Hey WA tour – and a discount if you do.

In case you couldn’t tell, I thoroughly enjoyed my morning exploring – and I’ve only touched the surface here of what we saw and learned.

Contrary to my first belief, it’s the opposite of stuffy. It mixes the history of Perth with some useful nuggets about what’s happening right now. Adie pointed out the latest, and future, developments in Perth and a heap of new or particularly interesting bars and restaurants as we wandered past. If you’re foodie folk or bar hoppers, book this for the beginning of your trip and you’ll be stacked with places to go in the evenings that follow – she also does bar tours if you’re so inclined.

I’d go as far to say that I think it was the best city tour I’ve ever been on, so, if you’re going to book any of the walking tours in Perth, I’d absolutely recommend this one.

The easiest place to book is direct with them on their website and, you can get a 10 percent discount on your booking if you add the code OHWTEN at the checkout.

The Oh Hey WA tour is, not surprisingly, one of my top 20 fun things to do in Perth, if you’re looking for some more ideas, click the link to check out the rest.

If you liked this post, please share it on social media so other people can find it. It will never rain on the day of your walking tour if you do! 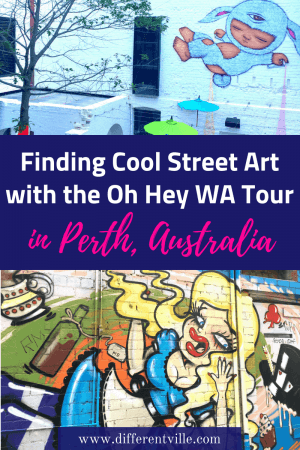