Babies are born all over the place – aeroplanes, supermarkets, hospitals – but, Differentville was born on a toilet in Taipei. Not a real one, I wouldn’t feel the need to share that with you, but, on a toilet-shaped chair in a toilet-themed restaurant called Modern Toilet in lively Ximending.

Interestingly, the toilet restaurant also began life as an idea formed on a toilet (this time a real one). 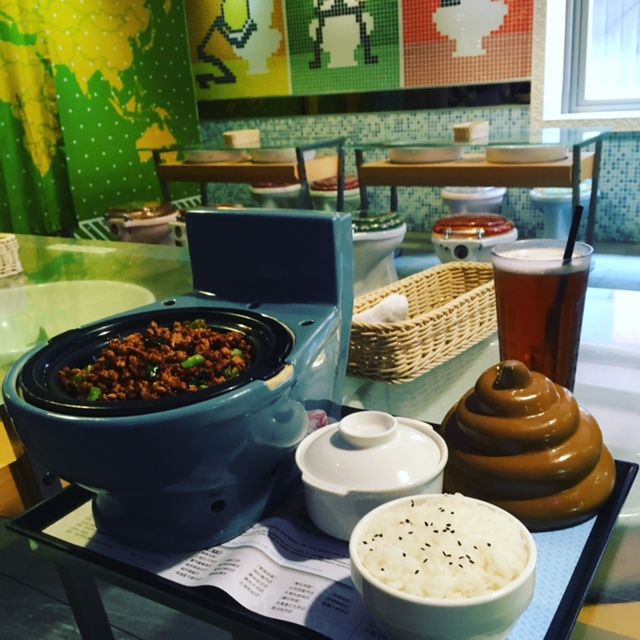 Disclosure: Some of the links in this post are affiliate links which mean I earn a small commission if you use them to book. This does not cost you any extra.Modern Toilet itself is NOT one of these links, my review is independent.

The Idea Behind Modern Toilet Restaurant.

According to the founders, the idea was conceived whilst one of them was in the bathroom reading a comic. They decided poo was fascinating and decided to devote a whole restaurant to it (as you do!).

The whole point of Modern Toilet is that everything is loo-themed. You sit on toilets, not chairs, the menu is written on a loo-seat shaped paper, the food comes in toilet-shaped dishes, the drinks in specimen bottles and the ice cream, well, it’s chocolate and poop-shaped.

I’d been wanting to go to it for years – so, when I recently got the chance to spend 48 hours in Taipei, it was toilet restaurant touchdown. 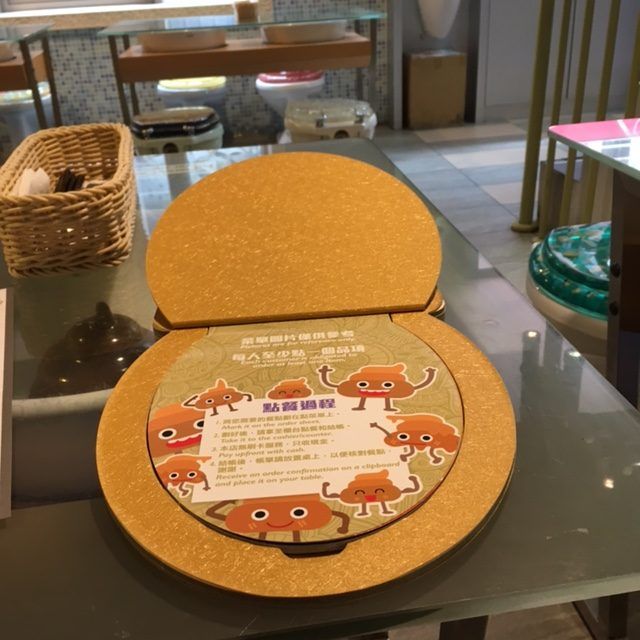 I went to Modern Toilet Ximending, an area often described as Taipei’s Harajuku.

While this is a busy area and has exciting distracting things everywhere the Modern Toilet restaurant Ximending stands out due to the giant toilet hanging off the side of the building (see below), you further confirm you’re in the right place when you enter the stairwell to find a loo and a giant plastic pile of poo in reception!

The restaurant opened at noon and I was there on the dot as I’d heard it gets seriously busy and yep, all the seats were filled by 12.15. Now, this might surprise you, as, let’s face it, food and faeces don’t normally mix well – but there are at least five reasons why I loved it, while all the other folk loved it and why I’d suggest you hit the toilet restaurant too.

Reason One to Visit Modern Toilet: It’s Cheap and the Food is Good

Considering adding a theme to a restaurant is normally a recipe for massive markups and mediocre food, Modern Toilet breaks the mould a bit.

I chose the Thai Spicy Stir-Fried Pork, which, lived up to its name being, erm, spicy and packed with pork – and was better than some of the Thai meals I’ve had in Sydney.

It came served with a bowl of fluffy rice, green tea and an ice cream for dessert. All that only cost 270 NTD (about £6.50 or AUD$11), which I thought was amazing value for a theme restaurant – particularly considering it was far more food than I could actually eat. 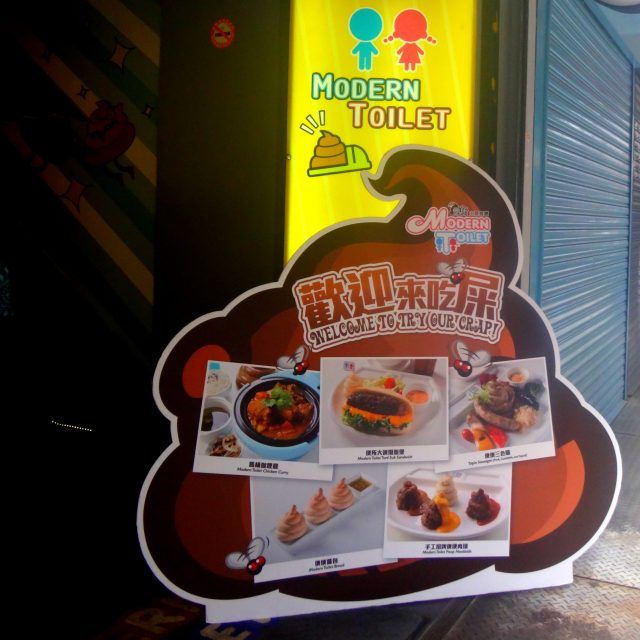 Reason Two to Visit: Everyone Will Find Something They Like

Modern Toilet might not be gourmet but it does cater to a huge variety of tastes offering everything from Chinese-style hotpot dishes, to steaks, via pasta with a variety of sauces.

Again, prices are pretty reasonable – if you want to order the cheapest toilet restaurant meal, go for the spaghetti based dishes which start at 260 NTD. The most expensive dishes at Modern Toilet Restaurant Ximending (each branch has its own specific menu) are the steak and other meat-based dishes – with the German Trotters topping things out at a whopping 580 NTD (about £14 or $26AUD)

Each dish is served in either big blue toilets shaped bowls, or white porcelain serving dishes which I guess are based on some medical device I don’t want to think about.

I admit my choice as to what I was eating was completely led by whether it came in a blue toilet or not!

♥ CLICK TO READ MORE: 25 Other Quirky Things to Do in Taipei ♥

There are cartoon poops on the walls, you sit on toilets, the bread rolls are poop shaped, the rice bowl has a giant plastic poo on top and you can drink something called Urine Mango Juice,(I didn’t). Since I visited they have also added Taiwanese Urine Beer to the menu! And a strawberry drink with a name so gruesome I can’t even repeat it – you’ll have to visit to check that one out!

If you want to nicely divide your Instagram followers hitting up a toilet restaurant is how you do it, half of mine were like ‘that’s brilliant’ the other half were horrified.

Personally, I was so excited that I’d finally got there they could probably have presented me with real poop and I’d still have photographed it!

If you get the urge to update your Instagram while in the restaurant, you might need a SIM. I ordered mine from Klook in advance and it was ready for me at the airport. Definitely recommend it as a plan.

Reason Four: You Might not want Dessert – yay, calories saved

I admit though, the famous poop shaped ice cream was where I did start to feel a bit queasy. Oddly it wasn’t the shape of the ice cream itself, but the urinal-shaped bowl, it was served in that was putting me off. Seems that’s where my disgust meter kicked in and I couldn’t finish it. 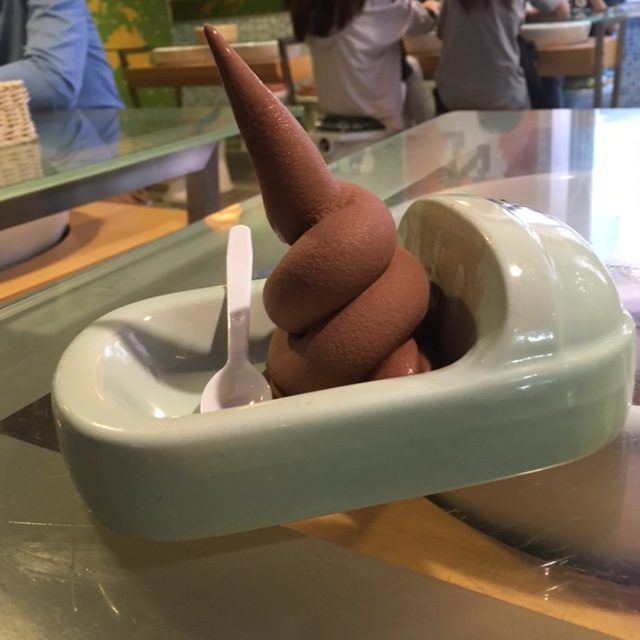 Reason Five; They have poo-venirs.

Finally, why buy a normal gift for friends and family when you could bring them home a poo-venir of a giant poo-shaped cushion instead? You can also buy toilet-shaped crockery of your very own, or pick up a couple of pens with poops on the top and an intriguing sticky tape holder shaped like someone sitting on a toilet. Think about this – if your job is crap you could subliminally tell the whole office via the medium of scatological stationary every single day.

Personally, I only needed one reason to visit Modern Toilet Ximending – the fact that it was there and completely bonkers.

I’ve wanted to go for absolutely ages – every time I booked a trip to an Asian city, I would google to see if they had a branch, get really excited when search results produced a hit – then find out it had closed down.

When I found out I was going to be in their founding city for 48 hours, it was my absolute must do in Taipei and I started this blog as soon as I got back. 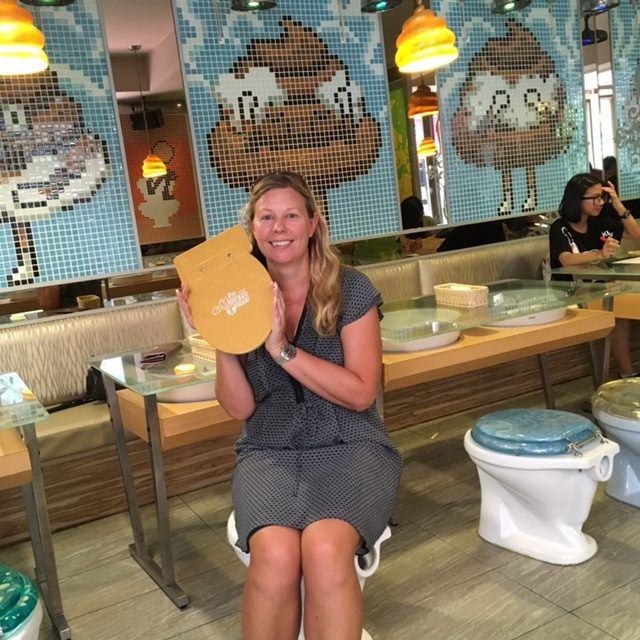 Where is Modern Toilet Ximending Located?

The restaurant is right in the middle of buzzing Ximending. Its official address is 2F, No 7,Ln 50,Xining S. Rd., Taipei City – there’s a map here–  and you’ll spot it by that giant toilet outside!.

The restaurant itself is upstairs, but you’ll know you’re in the right doorway when you spot the giant poop – and the sign above which amuses me greatly.

They also have other branches, including one near Shilin Night Market, and here’s where you’ll find details . 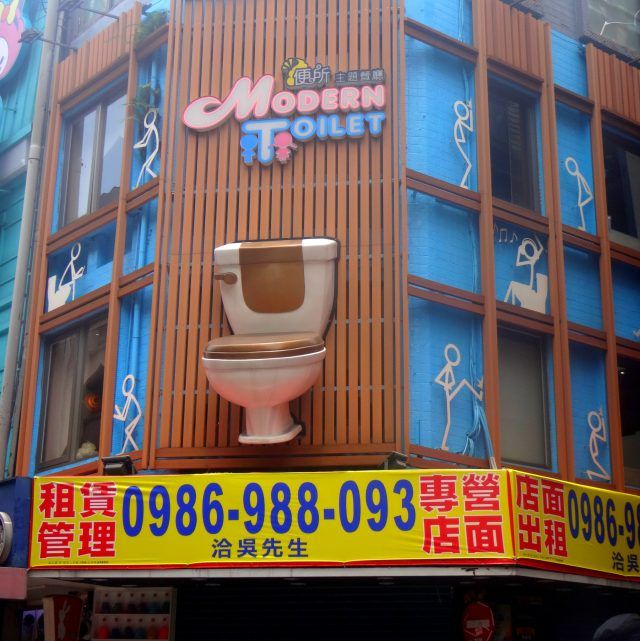 What else is nearby?

Being in the middle of Ximending puts you in the heart of the shopping district. It’s also very near Lungshan Temple, the amazing herbal market just around the corner from it and the Bopiliao Historic District. I saw all three before heading off to the restaurant.

Because I was so short on time, I also started my morning with a trip to the National Chiang Kai-Shek Memorial Hall – and the truly fabulously named (and rather impressive) Gate of Great Centrality and Perfect Uprightness.

Taipei’s Metro is very easy to use and makes getting around what’s actually quite a spread out city in a very short space of time very easy. Simply buy an Easycard, load it with cash and hop on and off the Metro at will, you can also use the Easycard in stores like 7-11 which is very handy.

I picked the Amba Zhongshan as it was in the middle of everything I wanted to see and very easy to reach from the new airport transit train. And it didn’t disappoint.

The rooms are clean and bright and I barely heard any other guests – which is pretty much all I need in a hotel.

I spent many happy mornings lounging in the comfy bed drinking tea while planning my day.

There’s a few bars and restaurants in the maze of backstreets around it but with such a short time in the city, I didn’t really get to explore the surroundings too much. There is a convenience store right next door though which was really handy when I arrived super tired on a late flight and wanted to grab a quick snack

Modern Toilet is not the only fun or themed cafe in Taipei. There are a lot of them – from ones based around Moomins, to ones with cats and much, more more. Check out our guide to the best cute and themed cafes in  Taipei if you want some more ideas.

Disclosure: Some of the links in this post are affiliate links which mean I earn a small commission if you use them to book. This does not cost you any extra. Modern Toilet itself is NOT one of these links, my review is independent. 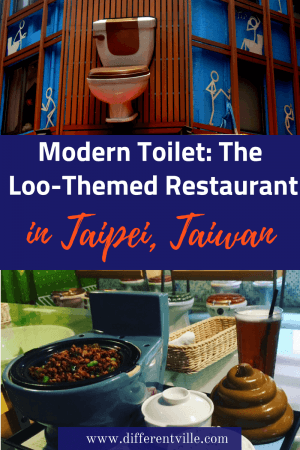 2 thoughts on “Should You Visit Modern Toilet Restaurant in Ximending, Taipei?”