Normally if I’m in Florida and want to make the world a happy place I go on the It’s a Small World ride in the Magic Kingdom – but when I was in Fort Lauderdale a while back, I decided to try something a bit different – I took myself off to one of Florida’s many bars selling kava, a chill out drink traditionally found in the South Pacific. 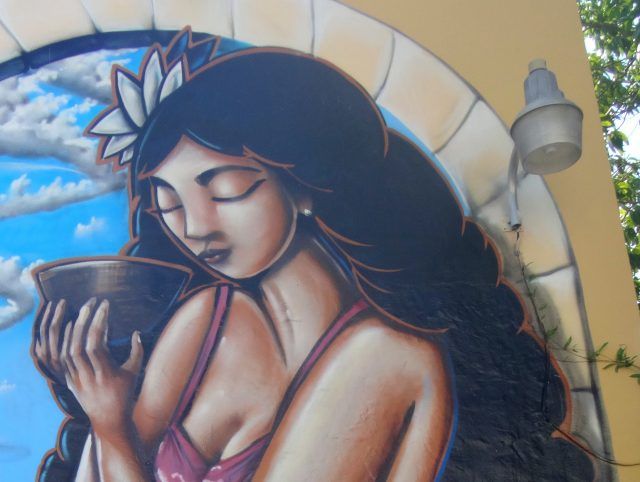 I was surprised to find kava bars in Florida – as I say the normal home of Kava drinking is the South Pacific. Made from the root of a plant in the pepper family it’s drunk socially there in the same way as beer and wine are drunk in most other countries.

However, it wasn’t that a drink from the Pacific Islands had made its way in driving distance to Disneyworld that confused me (it IS a small world after all), It was that kava on sale in a bar.

See, a while back when I lived in the UK kava was commonly sold as a health supplement for stress, but when some (now believed to be flawed) evidence suggested it was bad for the liver it was banned.

I, however, was intrigued by the stuff as when it was on sale I interviewed a fascinating guy called Chris Kilham, aka The Medicine Hunter, who travels the world checking out traditional herbs and his description of how kava was used it the South Pacific was so fantastic I remembered it for years.

Here’s what I printed at the time……

Kava is most common used now as an intoxicant. The root is distilled into a milky white beverage that’s drunk at home or in ‘kava bars’ and it only takes a coconut shell full to create an effect described by one user as ‘wearing a duvet against the world.’ Its slightly sedative, fuzzy-making effects however are considerably more pleasant than it’s taste. ‘It’s pretty pungent,’ says Chris Kilham. ‘In fact, the men spend the whole night spitting to get rid of the taste so by the end of the night the floor of your average kava bar is awash with spit.’

It turns out the US overturned their ban on kava in 2008 and as such, kava is legal in the US. It was herbal duvet time.

I was solo on this trip and legal and, served somewhere you want to go to on your own, can be two different things when it comes to faintly narcotic substances and so, with my interest piqued, I kept googling to find a suitable venue to take myself off to.

There was a kava bar on the Fort Lauderdale’s super-touristy Las Olas Boulevard called KavaSutra.

Another hunt revealed this was actually a chain with a few branches around the US – and it even had Instagram!

That sounded safe enough. I was also open at 10am – aka broad daylight – when I had free time. I figured this sounded as un-dodgy as it could get.

Admittedly, I was hoping there wouldn’t be a floor full of spit to contend with…I was wearing flip-flops,

Wandering past the coffee shops, cutesy tea rooms and yummy restaurants of Las Olas Blvd, I soon found Kava Sutra in the middle of a large square.

As I entered the phrase ‘fish out of water’ came to mind a little bit.

The girl outside was wearing tie-dye, the girl inside had shaved sides to her hair, the barman looked super hipster and I’m in there in my Dorothy Perkins tea dress looking like I’m off to a job interview, but I sucked up all the bravery I could muster, played the ‘blogger’ card and asked what a kava novice should have.

‘Actually, you need the strongest form,’ said hipster barman who was actually super friendly once he realised I was interested and not lost.

He explained that the more you use kava the more sensitive you become to the active ingredients, kavalactones, within it, and so, at first, a small dose won’t have much effect, you have to go large.

He whisked me up a brew that looked kind of like muddy water, popped a bit of pineapple on the side and brought it over. ‘Drink it as fast as you can and use the pineapple as a chaser,’ he recommended. 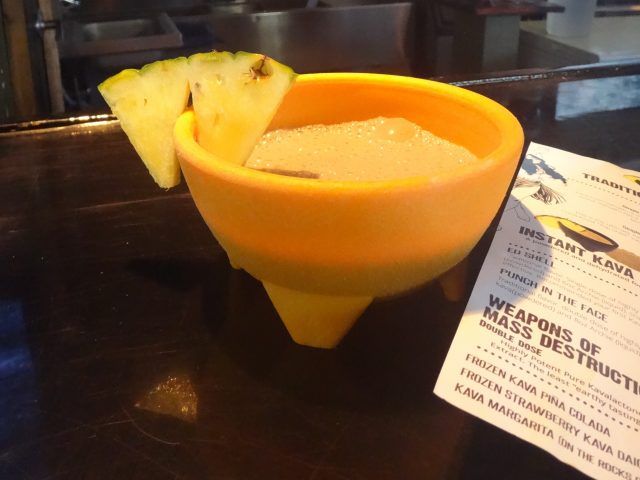 Phrases like that normally get me into trouble so, I started off just taking a mouthful of the stuff.

Actually, it didn’t taste so bad –  I like bitter things and that was the overwhelming taste, but the texture was a bit like drinking aforementioned muddy water – gritty and not massively conducive to savouring and so I knocked the rest back and ate my pineapple as suggested – I guess that’s to limit the spitting.

For the record, I can firmly state the floor of Kava Sutra is saliva-free!

Hipster barman then gave me a pint of water and I sat around wondering what happened next.

What Happens When You Drink Kava?

First up my lips went numb which I admit sent me into a small panic – the worry-prone part of my head was going ‘oh, no what have you done……is the first sign of liver failure numb lips?.’

Thankfully there were videos of fish and snails on the televisions around the bar to distract me, and so I didn’t hit Dr Google, instead, I just sat there thinking of Dory and relaxed.

At this point I didn’t really feel like anything had happened and so, after about 20 minutes of fiddling with my phone and watching snails, I headed off to do some important research for the foodie piece I was writing –buying what’s rumoured to be the best ice cream in Fort Lauderdale!!!

Kilwins if you’re wondering – and yes, it was pretty good. Their chocolate covered nutter butter cookies are even better, but I digress…

It was only when I was back outside walking down the road that I realised how good I felt.

That duvet description above was absolutely right. It was like that happy, slightly numb feeling you get after a big glass of wine – but without the fear that you might do something stupid in a minute because your faculties are a bit impaired.

I was totally alert but just with a nice happy bubble around me – considering I was walking around in one of my favourite states in the world with sunshine and bright blue sky you could definitely say I was in my happy place.

I had been worried it might make me drowsy but I wasn’t tired either….I could definitely get used to that feeling. 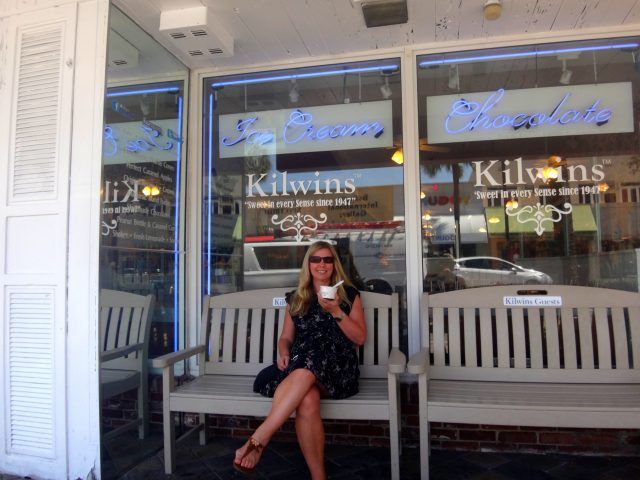 Seems I’m not alone in liking the effects of drinking kava either as Kava Bars in Florida are now almost as easy to find as Walmarts – particularly in South East Florida which has seen a wave of kava bars opening in recent years. The map of US kava bars created by kava supplier Kalm with Kava lists 56 in Florida alone.

Fort Lauderdale has at least four that I know of, but nearby St Petersburgh has so many it’s calling itself the kava capital of the USA – the local tourist board is even encouraging kava tourism!

And as part of that, the local bars are getting seriously creative.

There you have unicorn kava cocktails, ones covered in whipped cream – there are bars with fire pits, bars with ping pong tables, people even take their dogs with them. It looks awesome. Seriously check out the video below

There’s also a thriving kava scene in Austin, Texas and San Francisco- and bars are springing up all over the US. Making it a slightly different way to chill out on your hols in Florida, or other bits of the USA, than a Budweiser or two.

A Few Notes Before Drinking Kava

Before you all rush off to find your own kava bar duvet effect though, I have to put my sensible head on for a bit (it goes with the tea dress after all).

While kava is legal in the US, it is something you need to be sensible with.

Remember, the reason kava was withdrawn from sale was that there were fears it may cause liver damage. While this is now not believed to be the case (unless it’s used incorrectly, or, if the wrong part of the plant is consumed), it doesn’t mean there aren’t a few rules involved if you want to try drinking kava and hit up a kava bar when you’re on your Florida hols.

Here are some of the most common but I can’t be sure I’ve covered everything so do ask your friendly kava barman before you start knocking it back.

Don’t mix kava with alcohol – it heightens the effect.

If you drink alcohol regularly, you shouldn’t do kava regularly.

Don’t drive back to the hotel. The wrong side of the road is not easy at the best of times.

Kava is diuretic so drink that water they give you with it, especially if you are on holiday somewhere warm like Florida and not use to the heat.

Don’t mix it with any kind of antidepressant drugs or any other drug affecting mental function.

Some kava bars also sell a substance called kratom. It’s not been tested as fully for safety as kava and may be addictive – so be cautious. Also, never mix kava and kratom.

While in the US kava is just a fun way to mellow out if you don’t want actual booze if you try it as part of a village tour in Fiji or the other South Pacific islands respect the ceremony of it.

There endeth the lecture. But I will finish off with something else useful. You might hear people in a kava bar say ‘Bula’ as they down their bowls – it’s the toast commonly used when drinking Kava – it means ‘to life’ which sounds worth toasting to me.

Bula to all your holiday adventures! 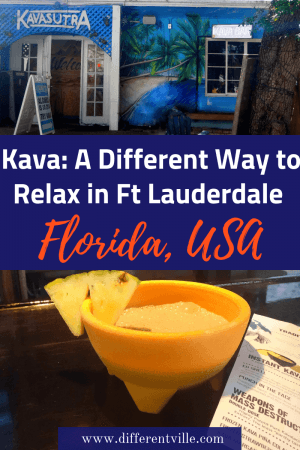