When the sight of balls of wool outside The Tea Cosy cafe in Sydney’s The Rocks drew me inside, I wasn’t expecting to write a haunted Sydney themed post – I was expecting to have a scone and maybe start myself a scarf, but once inside things took a spookier turn. 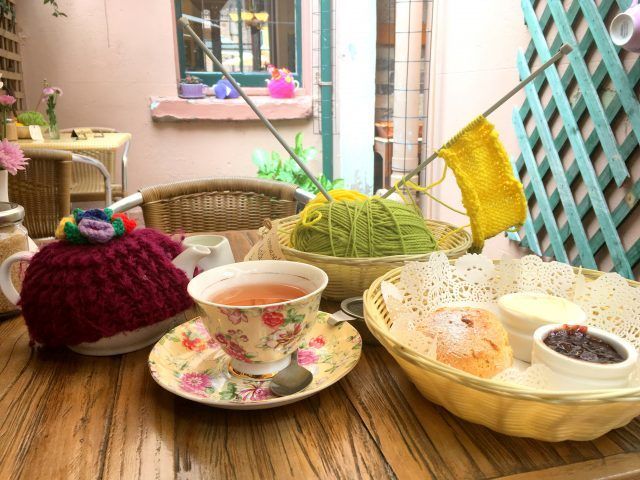 Admittedly, when you first wander into The Tea Cosy, supernatural phenomenon is not what hits you – cuteness is. The place is jam-packed with teapots covered in little woolly covers that look like everything from minions to the Irish Prime Minister!

After snapping away at far too many than necessary, I looked around at everyone else’s tables laden with cakey goodness and decided I quite fancied a treat myself and so I ordered one of The Tea Cosy’s scores with homemade jam for $15. 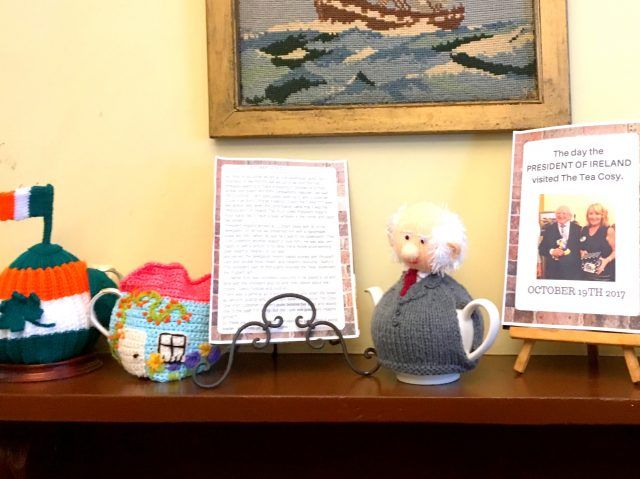 Settling down in the tiny courtyard garden to wait for my scone, I checked out the menu on the table to see what other things were on offer – and then I saw it. On the map of the cafe, was a section marked Nana’s Nook, with the word’s Resident Ghost on there…. erm, what? I’ve been sitting here photographing 57 tea cosies and the place is haunted.

Thankfully at that moment, the owner walked past and I managed to get the full story.

The Tale of the Tea Cosy Cafe Ghost

Shortly after they opened, a psychic came in for a cuppa and a bit of wool therapy, as I expect you need now and again when you’re communing with the undead all day.

Apparently, she saw something in the room that no-one else did. A woman with red hair wearing an apron.

Not surprisingly, the staff freaked a bit but the psychic deemed the spirit to be friendly and everyone was happy.

Shortly afterwards, another psychic said exactly the same thing!  And the legend of The Tea Cosy Ghost was born. 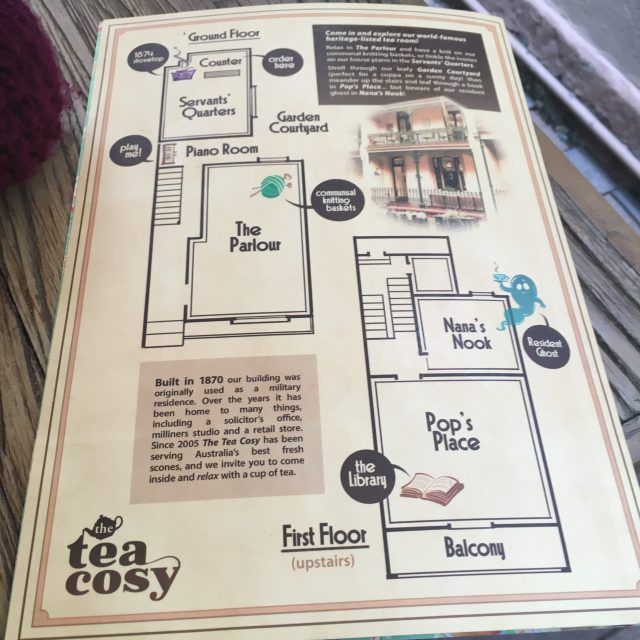 It wouldn’t be surprising if The Tea Cosy was haunted. It’s located in an old winding house built in the 1870s in one of Sydney’s oldest areas – a place famed for murders, hangings, violence and a small bout of the plague! Most of the buildings around here have some kind of spooky or grisly story connected to them and there are reportedly a lot of ghosts in The Rocks.

I asked if the owner has seen her spectral staff member. ‘No,’ she told me. ‘But things do move around up there so it’s quite possible she’s there.’ She then also told me her last shop, a few doors away, was another example of haunted Sydney – albeit a scarier one.

See, that ghost wasn’t quite as benign and she hated being alone there. ‘It was cold and every so often you’d just feel something menacing,’ she told me. ‘If there is a ghost here, she’s a friendly one.’

Scone demolished, I decided to wander upstairs to Nana’s Nook and see if I could detect a spooky presence, but nothing. The only frightening sight was the slightly wonky angle of a couple of pictures (anyone else itching to move that bottom one?) 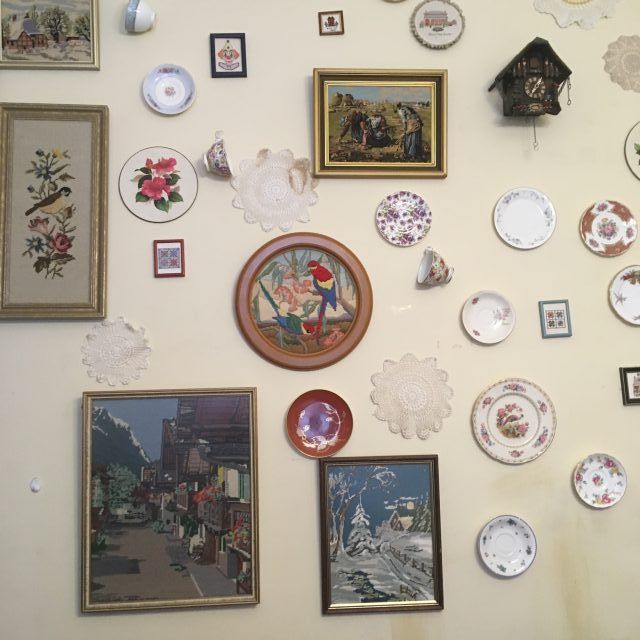 Mind, you, I’d probably have been bloody terrified if one of haunted Sydney’s residents had appeared – which would be a shame, because I like The Tea Cosy – the scones’ are tasty, the teapot is huge, the staff are really friendly and the garden outside is a peaceful suntrap – and running jibbering out of there white as a sheet and screaming might not be conducive to being welcomed back!

Other Haunted Places in Sydney’s The Rocks

The Tea Cosy Cafe isn’t the only place to go ghost hunting in Sydney’s The Rocks, there are heaps more places where you can channel your inner ghostbuster too – like these.

The Russell Hotel. This boutique hotel is right in the centre of The Rocks and listed as one of Australia’s most haunted hotels. The main culprit is a sailor who is sometimes spotted watching over guests in room 8. This report describing one writer’s night in the room definitely scared me – but is likely to see the nearest ghost hunter booking in immediately!  (Should you want to, here’s a link but I don’t take the blame for any nocturnal visitors)  At 143a George Street.

Parbury Ruins: You can’t access this example of haunted Sydney as a normal person as it’s located in the basement of an apartment block. You can only go in there on an organised ghost tour like this one.

Supposedly one of the most haunted places in Sydney, it was the only time on the ghost tour I did a few years ago that I did feel a bit creeped out – most of the tour is just good fun, albeit really interesting. The area is the remains of an old cottage. As you head down there on the ghost tour it’s cold and dark and reportedly haunted by the wife of the past owner in a black dress. 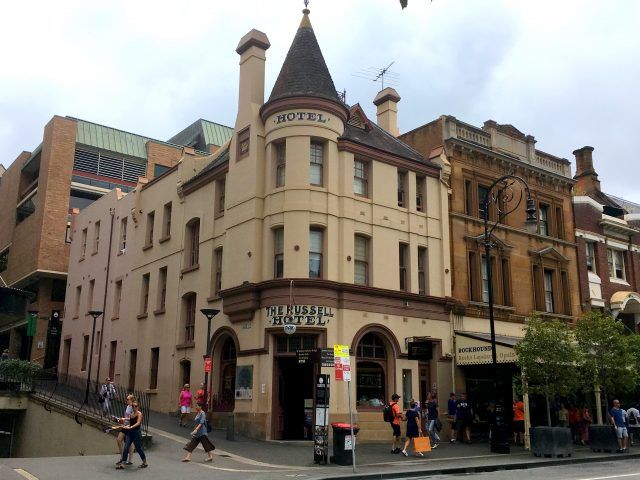 The Hero of Waterloo. Another haunted hotel in Sydney this one is reportedly home to all manner of ghostly goings-on. Staff have heard piano-playing in the middle of the night (so much so that they moved the piano) and chairs regularly move around in one of the upstairs room.

The spookiest place in there, apparently, is the staircase going to the cellar – rumour has it the ghost is of Anne Kirkman, the wife of a past publican – who died when her husband pushed her down them. She also likes to appear in the mirror behind people in the ladies toilet (I’m never going in there again).  Read all the spooky tales of owner Kazuko Nelson here  It’s at 81 Lower Fort Street

Hospital Lane: As the name might suggest this is the site of an old hospital and apparently has a really unnerving feeling at night.

The Australian Hotel. Home of a pretty good pizza, I spend a lot of time in the Australian, but I never like going to the loo there on my own and don’t like to look in the mirror there. Maybe, my spider sense was trying to tell me something – apparently, the hotel also has a friendly ghost that staff have named Maddox who wanders around upstairs at night. And a few other spirit folk have been seen on the premises. Find it at 100 Cumberland Street.

The Harbour Rocks Hotel. I only noticed this hotel the other day and wondered why the inscription on the window of the hotel’s Eric’s Bar was ‘Searching For Scarlett’ – turns out Eric is their resident ghost.

An ex-patron of the hotel he’s still hunting for his lost love Scarlet, the hotel’s past owner, who died of tuberculosis while he was serving time at sea. Go visit him for a drink at his bar on 34 Harrington Street. If you want to book into the hotel itself, here’s where to look.

The Lord Nelson. Another haunted pub. This time the ghost is called Hamish and he’s apparently an old sea captain who likes to turn off the beer taps now and again. He also doesn’t like noise – he moved out when the hotel had building works. Find him, and the pub, at 19 Kent Street.

Right, now I’m too scared to go anywhere in The Rocks after dark….ah, well, my liver will probably thank me!

If you want to head out of the Rocks for your ghost hunting, check out this list of Sydney’s other most haunted places, even reading about some of them gives me the creeps.

And don’t worry, it’s not all spooks and spirits in the Rocks, read our guide to the other cool and unusual things to do in the Rocks.

If you’re keen on finding other mythical creatures in Sydney, it might surprise you to discover that Sydney also has it’s own giant troll hidden under a bridge at the start of one of Sydney’s prettiest walks. Here’s where to find the Sydney troll.

Do you know of any more examples of haunted Sydney or spooky places near the Rocks – let me know in the comments. 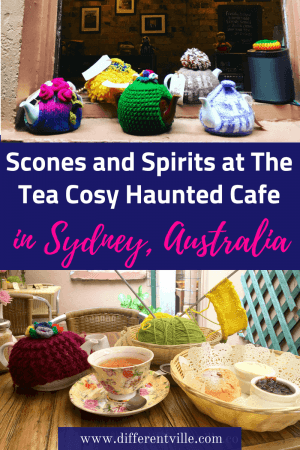 2 thoughts on “The Ghostly Secret of The Tea Cosy Cafe, Sydney”