Every day hundreds of people pay a three-figure sum for the amazing experience of climbing the Sydney Harbour Bridge, but, if your budget or stomach for heights don’t stretch to that there’s a cheaper, less terrifying alternative, The Pylon Lookout. I think it’s seriously the most under-rated sight in Sydney and it’s a must do if you want the best view of Sydney at a fraction of the cost of the Bridge Climb.. 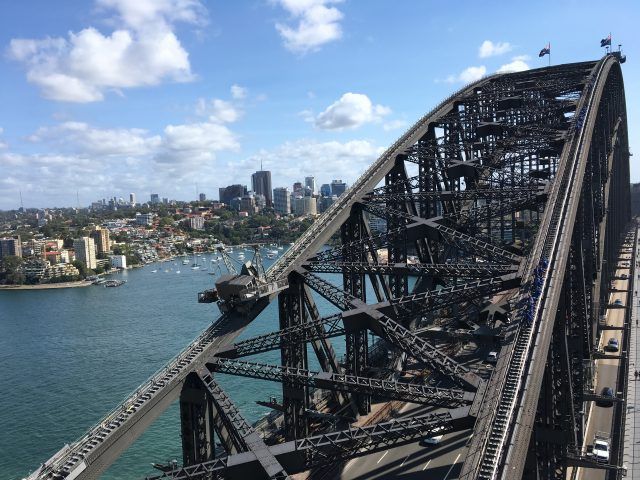 The pylons are those large concrete pillars you see at the end of the Sydney Harbour Bridge.

The Pylon Lookout is at the top of the south-east one, aka the first one you reach when walking across the Harbour Bridge from the city.

The Pylon Lookout costs an extremely wallet-friendly $15 for adults to visit (less than £10) and, unlike the Bridge Climb, you can spend as long up there as you like.

Your first job though is getting up there. The Pylon Lookout is located 87 metres above sea level – thankfully most of that is the bridge so to get to the top you just have to climb 200 steps. If you’re fairly fit it’s not a problem, but if you’re cursing that no-one had the foresight to put in a lift, the climb can be nicely divided into a few stages.

The ticket office is up a few flights, you can then ascend another few sets and use the loo or check out one of the many information areas dotted around the second floor. If your legs or lungs really aren’t happy though, there’s another seat before you reach the top!

♥ Fun Fact: When the Bridge first opened the Pylons had post offices inside and for the first two weeks it opened you could send telegrams using special Harbour Bridge stamps.♥

Once you reach the top of the steps, you’re in a small room with interesting facts about the Harbour Bridge – like the fact that it can expand 180mm on a hot day, that it contains 6 million rivets and to coat it with one coat of paint takes 30,000 litres of paint – and then you step out onto the top with the whole of Sydney spread out in front of you.

It has a 360-degree view of Sydney and the Harbour. You can see north past the bridge, over the Opera House, around Circular Quay (check out some of the cool stuff to do there here) and the twinkly harbour with its floaty boats and blue, blue sea.

You can gaze into the city – although anything further south is blocked by the CBD towerblocks – and then, out to the wast, you overlook Darling Harbour, Cockatoo Island and out to the Anzac Bridge.

The most amazing sight though is the perspective of the bridge – most of the above sights you can see from various other high points in the city, but nothing compares with being at eye level with the bridge itself.

In fact, I never really registered until this moment that one of the massive downsides of climbing the Harbour Bridge is it’s not really going to be in your pictures!! 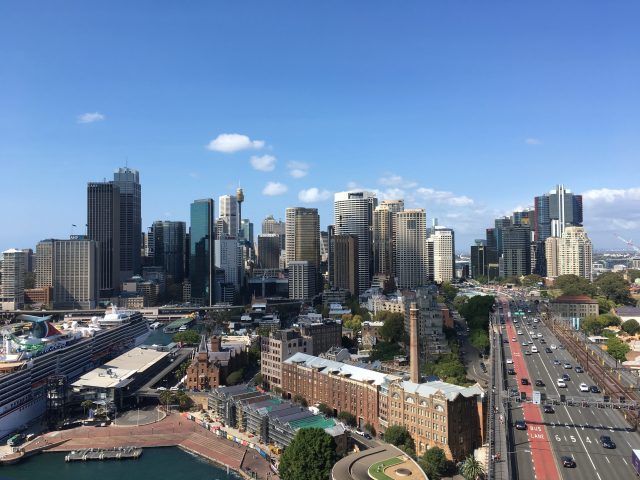 For that reason when it comes to the battle of the Pylon Lookout vs the Bridge Climb – Pylon lookout wins. Plus you don’t have to wear that odd looking jumpsuit – and you can take your own camera and, did I mention it costs $15, whereas even the sampler climb on the bridge for an adult costs $168.

Right, now this is where my ‘fear of heights’ advice head switches on.

See, I’m scared of heights, but I still decide that I’m going to go up things – which sometimes goes well, sometimes leads to me having to be helped off the top of a temple close to tears by a Thai taxi driver (yes, that happened). This means all my posts on high stuff come with this unique section!

The good news, if you’re scared of heights is that the whole pylon is surrounded by a wall about four foot high and on top of that is a glass panel.

The upshot of this is that you don’t actually really realise that you’re high up and I quite comfortably trotted my way around the top of the building.

The downside of this calming wall is that if you want to take decent pictures you need to climb up onto the sturdy metal shelf that’s placed pretty much all around the base of the pylon.

This is not so brilliant if you’re scared of heights as getting up there requires launching yourself towards the edge of the building. 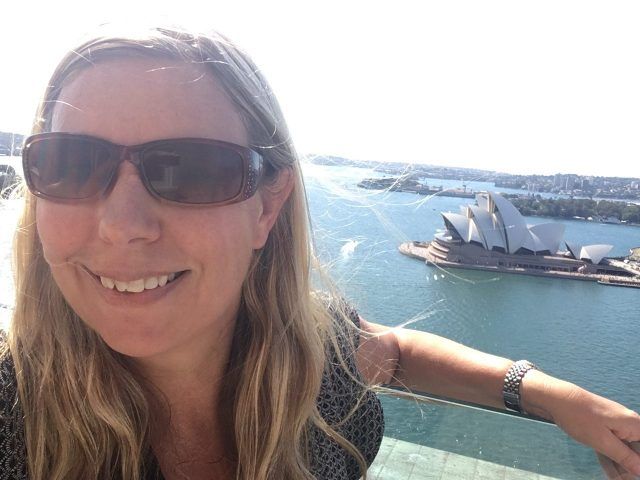 ‘Oh, she’s nervous,’ said the concerned blonde lady next to me as I kept my vice-like grip onto the glass panelling while trying to make my selfie smile look less ‘rictus grimace’ more ‘Look at me, sooo happy up in the sky,’

‘No, I’m absolutely bloody terrified,’ were the words I bit back as my legs actually shook underneath me.

And then my hands followed them…this was one shot I took of the bridge after my hands started to shake. Thankfully The Boyfriend was there to take some in focus ones or this would have been a very sad looking blog post. 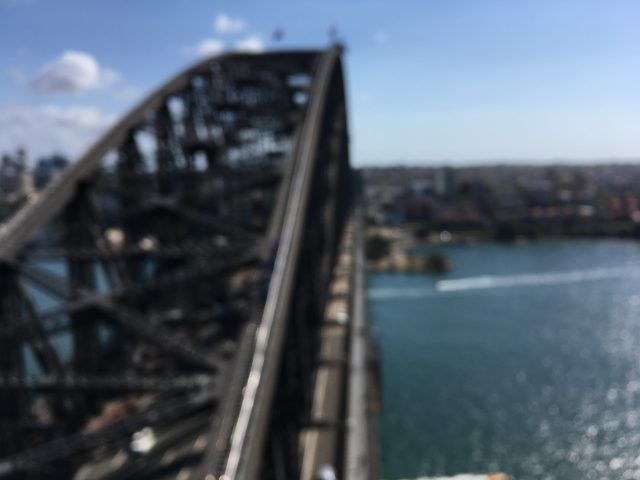 Thankfully, as soon I stepped down off the ledge, the reassuring sturdity of the big thick wall surrounded me and chilled me out again – until the next time I had to launch myself up towards the edge to take another photo.

So is it Vertigo Friendly or Not?

I’m definitely getting better with tall buildings, but if you’re not, I would be wary of standing on the benches.

You can still see a good way over the edge and into the distance without doing so –  – you just can’t see what’s right below you, but you could poke your (very tightly grasped) camera or phone over top of the glass to get some good shots of that.

Oh, and just one other thing to watch – the stairs going up to the pylon have gaps underneath them which is something that triggers my height issues. You can’t see outside at any point so it’s not too scary (compared to say, The Eiffel Tower) but worth mentioning if that’s one of the things that affects you too. 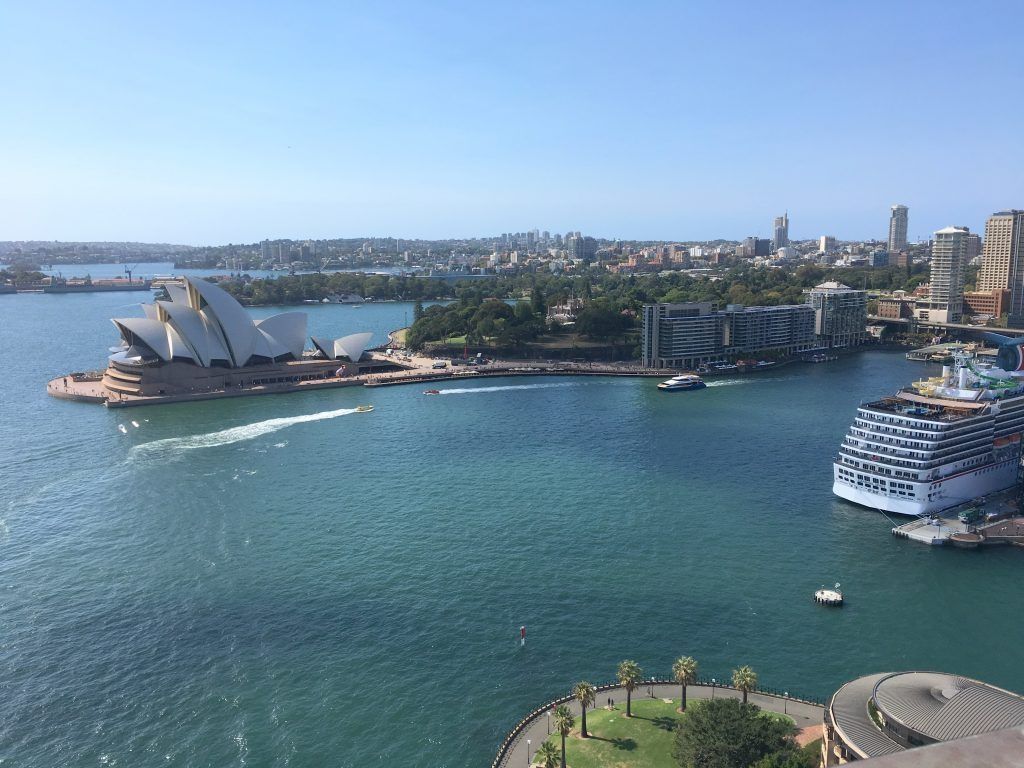 Right, back to the information for the non-scaredy cats amongst us. And, in a handily co-incidental segue, it is feline-focused.

See, while the view from the Pylon Lookout is amazing, the thing that most intrigued me about my trip to this part of the bridge, was the story of the white cats of the Harbour Bridge that I spotted in the museum.

It seems some cats actually used to live on the Pylon.

The White Cats of the Harbour Bridge Pylon

When it first opened in 1934, two years after the Bridge itself, the Pylon Lookout was quite the tourist attraction with different exhibitions and a tea room to attract people. Between 1948-1971 it held an exhibition called the All Australian Exhibition which was tended by a lady called Yvonne Rentoul.

For some reason that isn’t quite explained, she had a cattery on the roof of the pylon – known as the Cattage – and at least two white cats called Bridget and Pylon lived up there; scampering around the walls as if they were in your average back garden rather than nearly 90 metres above water – AND THERE ARE PICTURES 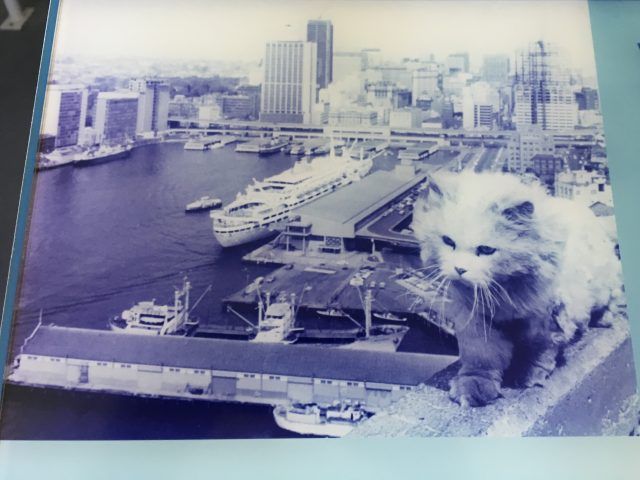 My favourite part of the story though is that if doing pylon acrobatics wasn’t enough, the cats had a Merry Go Round they used to sit on to amuse people – sadly, there doesn’t seem to be any pictures of that! There is, however, video on YouTube of them in action and frolicking around the pylons.

This whole story filled me with immense joy.

Cost: Adults pay $15 to enter the Pylon Lookout, seniors and students (with a concession card) are just $10, four and under go free while 5-7-year-olds cost $5. For a city that’s normally so expensive, it’s an absolute bargain. And one of the best cheap things to do in Sydney.

Opening Hours: The Pylon Lookout is open from 10 am to 5 pm every day except Christmas Day. While apparently, 122,000 people visit the Lookout every year, we went right as it opened on a Saturday and virtually had the place to ourselves. Find out more details on their website.

How to Get There: If you’re coming from the CBD or the Rocks then simply walk up the steps on Cumberland Street that take you to the Harbour Bridge Walkway – the Pylon Lookout is on the first pylon you come across. When you head back, why not check out some of our suggestions of some more unusual things to do in The Rocks (there’s ghosts, art and scones).

From Miller’s Point on the North Shore, walk all the way over the bridge and the Lookout is the last pylon you come to. If you’re over that way don’t forget to check out Wendy’s Secret Garden – it’s beautiful.

If you’re coming from Circular Quay/The Opera House, I personally, think the fastest way is to take the glass elevator up to the Cahill Expressway and just follow that all the way to end where it meets the Cumberland Steps. The view from the Expressway is also really pretty so if you haven’t been up there it’s definitely the nicer way to walk – here’s the view. 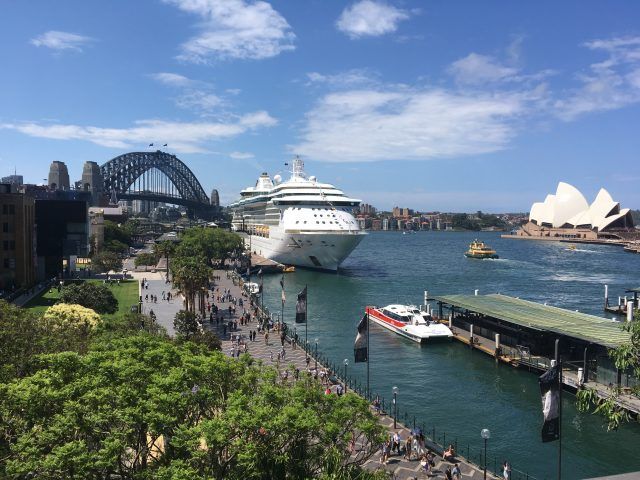 If you’re looking for some other places to check out the view of Sydney from up high and would ideally like a drink in your hand as you do it, check out the restaurants on top of the The Sydney Eye (you can book a two or three course dining package here if you want to plan in advance), O Bar – which revolves, The Bar at the Shangri La and the roof of the Glenmore Hotel. For a different perspective, there’s also the new Champagne Bar in the Sofitel Darling Harbour.

Hotel wise there are lots of hotels with views of Sydney Harbour but one of the best is from the stunning rooftop at the YHA Hostel Sydney Harbour. With a prime position in The Rocks it has million dollar views at budget (for Sydney) hotel prices. A double room with a private bathroom costs around £120 a night. The private rooms do sell out quickly so check out prices and booking details here.

If you like this post, why not share it on social media so other people can find out about the cheap alternative to climbing the Harbour Bridge too. 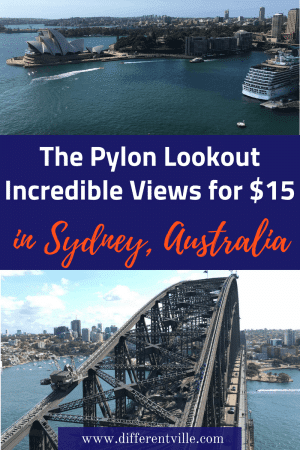 2 thoughts on “The Harbour Bridge Pylon Lookout is a Sydney Must-Do. Here’s Why.”

Looking for an Airbnb?