If you spend much time in the UK’s New Forest you get used to seeing animals wandering around – ponies, cows, donkeys all commonly appear next to your table in the pub garden, outside ice cream shops or, often, simply standing in the middle of the road surveying which bit of grass to munch next, but in autumn the above menagerie is also joined by a few hundred New Forest pigs on ‘pannage’. 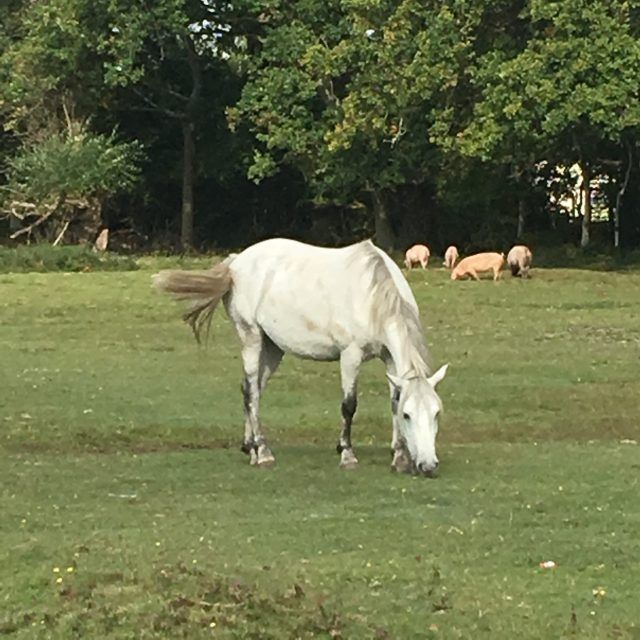 I’d never heard of pannage until a couple of days ago when I excitedly encountered my first piggy crew.

My mum and I had headed out to the deer sanctuary at Bolderwood to see if we could spot any deer being fed. Bambi wasn’t in residence but trotting past the car park were about 10 very animated piggies. All different colours they didn’t look like a family, but they happily ran around the field together snuffling madly,

I’d never seen pigs in the forest before (my mum lives down here so I’ve been to visit a lot) and I was therefore highly entertained…but then the next day, I spotted another five or six pigs running down the side of the road. And then a bit further down the road another lot were foraging around behind some ponies. Clearly, something was going on – so, I investigated.

Every Autumn hundreds of domestic #pigs are let loose in the UK's New Forest. Their job is to hoover up the acorns that fall in the forest so the ponies that live here don't eat them – acorns poison ponies. Here's one crew doing their civic duty near #Bolderwood. You'll spot them till 12th Nov #piggies #pannage #newforest #nature

It seems the idea of pannage is that the pigs are released into the forest at the same time as the first acorns fall from the trees.

Acorns, in large quantities, are poisonous to the ponies and cows that normally roam the New Forest but the nuts don’t have the same effect on pigs which are a bit smarter and spit out the toxic bits.

The idea is that the released pigs will rampage around the forest, hoovering up the acorns (and other nuts and fermenting apples that can also cause ponies grief) so the horses don’t come a cropper. Think of it as kind of like a porcine spring break.

Seems this year’s pannage pigs were let loose on September the 11th and they’ll be snorting their way around the area until pannage season stops on November 12th when they get rounded up again – which doesn’t sound like the easiest of tasks as they don’t have tracking chips and they do have an entire forest to munch their way through.

Apparently, though, most of the pigs actually don’t stray that far from home – and some even go back to their shelters at night – farmers also use trotter tracks to spot where any wayward charges have headed off to and collect the stragglers.

♥ READ MORE: Quirky Things to Do on Guernsey ♥

Admittedly, the porkers might not be quite so keen to head home if they discovered what happens to the New Forest pigs after pannage season…..veggie and vegan friends look away now….it seems that post-pannage pork is quite the delicacy – apparently, all those acorns create a darker, richer, nutty-tasting meat that restaurants and top end butchers are very keen to promote!

The famous Spanish delicacy Iberico Ham comes from acorn-fed pigs and, New Forest pannage pork offers the same idea here in the UK. Best not think about that bit when looking at the cuteness gambolling around the grassy bits!

Where to spot Pannage Pigs in the New Forest

Seeing the New Forest Pannage Pigs is a matter of luck – there’s no one place that they congregate. I saw mine at the Bolderwood deer sanctuary and close to the Rising Sun pub near Bashley – also home to an awesome steak and kidney pudding if you’re there close to dinner time!

Considering the subject of this post there really is only one place for us to suggest – The Pig Hotel in Brockenhurst. This country house hotel is part of a family of The Pig hotels and prides itself on comfy, shabby chic rooms and incredibly fresh food. Sadly I’ve not been lucky enough to stay there yet.

I have wandered around Brockenhurst though and it’s super cute. You might also want to consider Carey’s Manor which has a great spa and I have spent the day there being royally pampered. Their Thai restaurant is also really good. 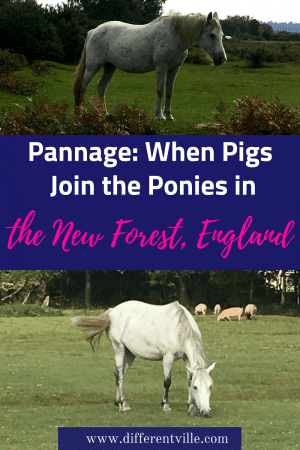 3 thoughts on “Pannage: Why The New Forest Is Suddenly Full of Pigs.”