Giapo is an ice cream shop in the middle of Auckland, New Zealand. So far, so boring blog post – but this is no ordinary ice cream shop. This one is full of surprises – and probably creates New Zealand’s Most Instagrammable Ice creams. Here’s why.

The idea that such as establishment might come loaded with surprises could sound odd – after all, it’s shop that sells ice cream what can possibly make it different from all the others? The answer, my frozen-treat loving friends, is quite a lot.

Giapo is the brainchild of owner and chief ice cream meister Gianpaolo Graziolio and within the shop he’s hoping to change everyone’s image of what ice cream should be about…which, comes with a few unique touches. 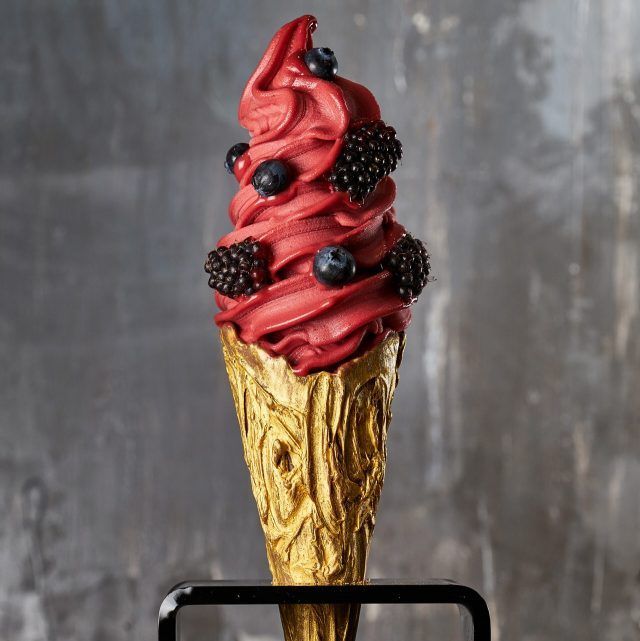 People Queue For a Cone.

Giapo has a reputation as Auckland’s best ice cream – and also as one of the most instagrammable sights in Auckland – and the combination is a recipe for popular.

The first time I wandered past, it was about 8.30pm on a Sunday night and the queue was eight deep, thankfully when I went back on the Monday just after lunch, there was only one person in front of me.

Most ice cream shops are easily identifiable by the big tubs of melty fabulousness that you can marvel over as you walk in. You can stand in the queue deciding whether you’d prefer the chocolate one or the strawberry one but that doesn’t happen at Giapo. Oh no.

Instead, you walk up to a plain white counter rather like you’d find in a department store beauty department – and then, if it’s your first visit, the show begins.

After asking you whether you’re a sweet or savoury person, your helper turns behind them and dips the spoon into a magically concealed fridge. One by one you’re offered a taste of the flavours on offer.

The most important advice I can impart about a trip here comes at this moment…try everything you’re offered, even if you don’t think you’re going to like it because…

You Can Make Ice Cream From Some Really Weird Stuff!

Graziolio’s reputation as one of the most creative ice cream blenders out there means you’re going to come across flavour combinations that are going to surprise you and you may think ‘urgh’ but try them.

The day I went there was a flavour called Keri Keri Avocado Sweet Soy Gravy on offer which was the first time I have ever tasted a properly savoury ice cream.

There was also the brightest green sorbet I have ever seen in my life made from a mix of kiwi fruit and coriander – it was delicious, although I wasn’t sure I wanted a whole bowlful.

In fact, there were 11 exciting flavours on the menu the day I visited but I stupidly stopped tasting after about six little spoonfuls, thinking I had chosen my favourite flavour and conscious, that if I kept going I might not have enough sweet tooth left to actually enjoy it. At this point I said I didn’t need to try anything else and placed my order for a single scoop of Giapo Buono – a mix of caramel, hazelnut, praline and amaretto.

Then, as my order went to the kitchen where the creations are put together, they gave me a tiny mouthful of their boozy sorbet called NZ Blackberry & Martini Rosso (see top pic) – it was one of the best things I’ve ever tasted. I now had massive ice cream choice regret. Do not make my mistake. Try everything people, everything.

You Don’t Know What You’re Getting Until You See It.

While you choose your ice cream and what to put it in (more on that in a minute) even after you place your order you still won’t know what toppings you’re getting – Giapo’s team have come up with combinations they think show off their flavours best and they like the choice to be a surprise. 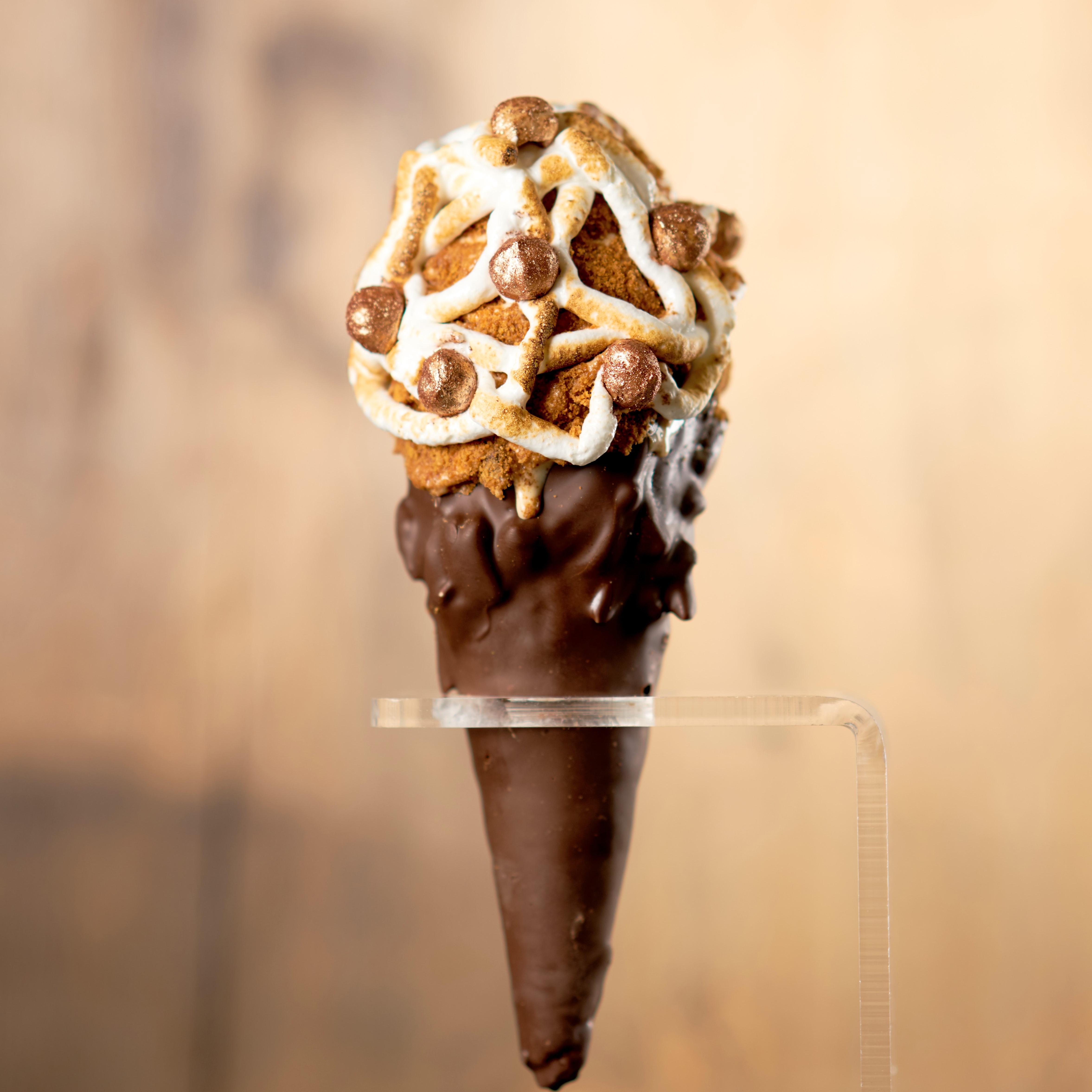 At this point, my alarm bells started ringing as I HATE coffee – even the slightest hint of the stuff – so, I asked them to make sure they didn’t put anything coffee-flavoured near it. What I had forgotten, because it’s not something I usually encounter, is that I also dislike meringue and unfortunately, I had picked the Giapo Buono (above) which comes with a layer of the stuff on top.

Therefore if there is anything you really don’t like that might, theoretically, end up on an ice cream, then do tell them, or, if you don’t want to spoil the surprise, at least check it’s not on your choice just in case.

Also, let them know if you’re on a special diet – the menu offers both vegan and gluten-free options and it is also obviously essential at this point to alert them to any allergy issues.

Everything I had read about Giapo had said ‘it’s a bit more expensive than the normal ice cream shop’ – but no-one had given specific prices so I wasn’t sure exactly what this meant.

Were we talking slightly more than a Mr Whippy cone from a van or you need to sell a limb?

The answer was somewhere in between as the entry-level option was NZ$8.50 – about twice as much as I pay for my go-to frozen treat, a scoop of Gelato Messina, here in Sydney. However, be warned, you can go completely over the top in here, And here’s why… 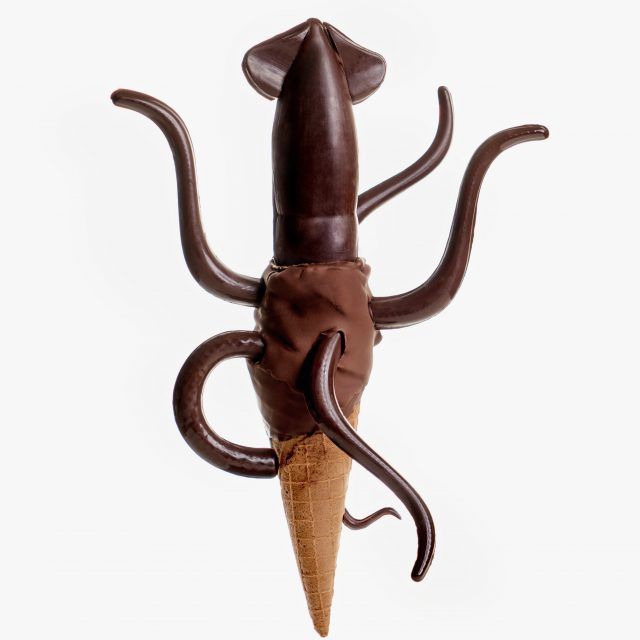 One thing that’s earned Giapo its reputation as one of the top things to do in Auckland, especially for foodies, is that their imagination when it comes to ice cream and what you can do with it knows no limits.

I was lucky enough to meet Mr Grazioloio when I was there and he offered to show me the kitchen and innovation room – when I walked into the latter there was a big sign on the pinboard saying ‘normal is boring.’ And when it comes to coming up with ideas, he definitely lives by the mantra.

You want your ice cream topped with a giant chocolate squid – no worries.

What about a copy of Auckland’s famous Sky Tower – that’s okay, we have those in white and dark chocolate.

And if for some reason which I can’t even fathom, if you want to eat ice cream out of what looks like a Yorkshire Pudding lined with chocolate you can feed that whim here too! Look! 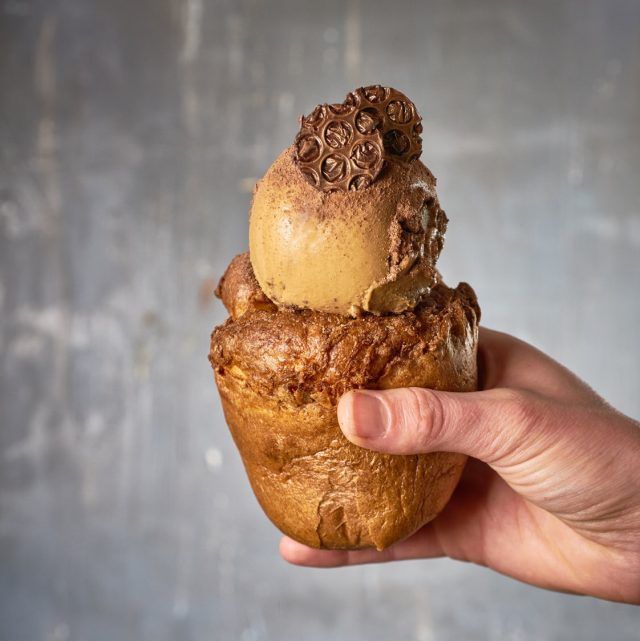 It’s a cliche of a description but he is the Willy Wonka of Ice Cream. I think if you worked there nothing would be too ridiculous an idea to suggest come the weekly staff meeting which I wholeheartedly approve of

So, what does an ice cream at Giapo cost?

A basic one scoop in a cup with the recommended toppings costs from NZ$8.50-10 depending on the flavour you choose – it costs $3 to add another scoop of any flavour

If you want to something more exciting than a cup to put your ice cream in, prices start at NZ$3.50 for a waffle cone linked with milk chocolate – but go up to $12.50 for the fantastic gold or other deluxe cones (so you’d be looking at $21 for one scoop in a deluxe cone with the basic toppings).

At this point, you’d be looking at $38 for an ice cream – admittedly, one of the most amazing looking ones EVER but still… this made my NZ$8.50 cup seem a positive bargain! I was, however, a little disappointed with it 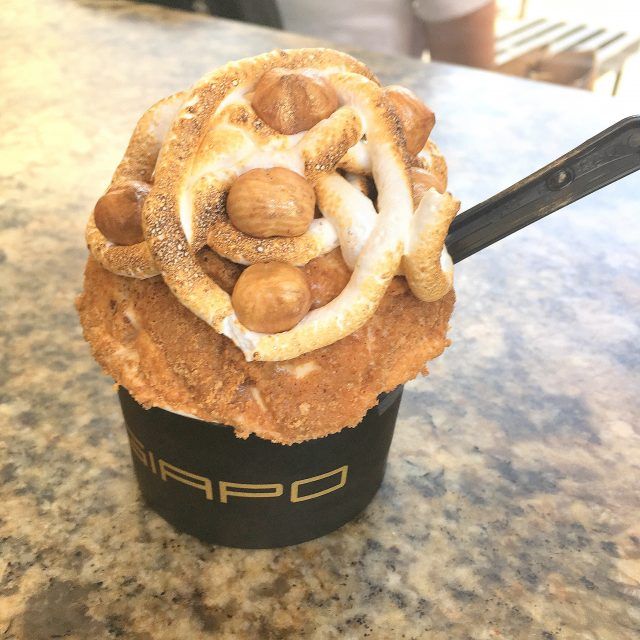 See, I didn’t order the cup version to keep the cost down. I just don’t like ice cream cones and one of my pet hates is people who order food just for an instagram pic and don’t eat it so I couldn’t bring myself to do that.

However, this meant my ice cream didn’t look as fabulous as the ones around me – I was coveting the little kid’s creation next to me which seemed to come with a chocolate spaceship on the top. I also desperately wanted a gold cone with sprinkles; and yes, I wanted a squid, but I was there alone and that seemed like something you needed a friend with you to fully enjoy.

When something comes with this much hype and frippery, you have to wonder if it’s going to live up to it – but even if I was a bit sad about my choice of presentation, I had no so worry about the taste.

Admittedly, mine was a little overpowered by the meringue (and I would have made a different choice if I’d known that was involved) but once I’d squished that to the side, the ice cream was rich and creamy – and the hazelnuts scattered over the top were not only clearly very fresh – THEY WERE GOLD! This made me extremely happy!

So, should you go to Giapo on your trip to Auckland?

If you’re going there just because you fancy an ice cream it might not be your best choice.

A lot of the negative reviews of Giapo come from people who just wanted to get in, get an ice cream and get out, and they didn’t like the whole ‘faff’ of the experience’. And I can understand that so I say if you’re in a hurry or just want any old ice cream this is probably not the best option for you.

However, If you’re a foodie or just someone looking for a bit of an experience, some theatrics, a giant chocolate squid on top of a cone – or, just something you won’t find anywhere else in the world, then absolutely, Giapo should be up there on your list of top things to do in Auckland.

For uber foodies, he also offers kitchen tours and a Chef’s Table where you get to try all manner of ice cream excitement.

And if you do go, go hungry! All those little samples are quite filling and you don’t want to go through all of this and not eat the blooming thing.

I’m still thinking about the sorbet I missed out on though. So, my number one rule for anyone visiting Giapo is choose carefully people, choose carefully, The FOMO is strong with this one.

♥ Read More: The Most Unusual Things to do in Auckland ♥

Giapo is located at 12 Gore Street in Auckland CBD.  This isn’t necessarily somewhere every tourist will naturally go, if Auckland has a backpackers district, this is it, but it’s fairly close to Britomart and a short walk from Queen Street. It’s open from 12.15 each day. Closing hours vary, check the website for exact timings.

Images from Giapo used with permission 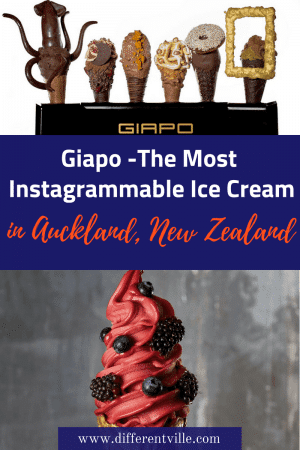