There’s a few places in Australia you can see a wombat – but not too many where you can actually cuddle one. Sleepy Burrows Wombat Sanctuary is one of them. Here’s what you need to know…

Australia has some amazing animals, but my favourite has to be wombats.

From the day I first read the book Diary of A Wombat I became obsessed.

The day I read about Sleepy Burrows Wombat Sanctuary near Canberra – a place where you wouldn’t just have a normal wombat encounter, you could cuddle a wombat, play with a wombat and feed a wombat, I was so excited I started to make sounds only dolphins could hear.

Thankfully, this high pitched squealing seemed to permeate through to The Boyfriend and the next Valentines Day I received the gift of a visit to Sleepy Burrows. I was going to cuddle a wombat.

What is Sleepy Burrows?

As the title of this post suggests, Sleepy Burrows is not a zoo, it’s a wombat sanctuary run out of the home of volunteer Donna Stepan OAM and her husband Phil.

Here they rescue wombats that have been injured or got sick, sort out wombats that people thought they could turn into pets (then suddenly realised what a stupid idea that is – no, wombats do not make good pets) and, hand rear tiny pinkies left in their mother’s pouches when their mums are killed, usually by cars.

The hope is that every wombat that comes to Sleepy Burrows ends up being released back into the wild and hundreds of animals owe them their lives.

I didn’t quite know what to expect when I first arrived at Sleepy Burrows – but it wasn’t walking into a front room of a pretty normal looking bush home to find two puppy-sized wombats chasing each other round the sofa like they owned the place – which they pretty much do!

Looking after the charges here is a full-time job, Donna hasn’t had a holiday in years, and, so when you come to visit you really do get to muck in.

First job – try and wear out two very excited toddler wombats by playing with them so they’d settle enough to have their bottles.

They run, they jump, they climb, they don’t give a fig if you’re in their way if they are coming through – and even at that size, a wombat barrelling toward you at full pelt is like being smacked by dodgeball!

Right now the wombats are used to being around humans and so they’re very keen to have new people to climb on and chew. I would advise sturdy shoes! And don’t go with bare legs.

Once they’d finished hurtling around, it was time to give them bottles – I’m not sure I’ve ever been so happy. I’m cuddling my very own baby wombat and it’s got a bottle in its mouth.

Like babies, once you’ve fed them wombats go to sleep and so Donna picked them up and wrapped them in little pouches and off they went to their nursery in the other room.

A second group of toddlers then came out to play and the process was repeated. It was quite possibly the best hour of my life.

Rose’s mother had been killed but thankfully someone checked her pouch and found her baby still there – so the sanctuary was now hand-rearing her.

Pinkies are so named because they don’t yet have fur – and one of the most important parts of raising pinkies is keeping their skin supple – something that would normally happen naturally as they moved round in the pouch.

The Sleepy Burrows Team showed us how they oil her skin and then fed her.

Baby playtime was over… it was time to go see the big kids.

Sleepy Burrows is split into a few main areas…the house where the small wombats live, a set of fields high up on the property which we’ll get to in a minute and the shed-like building outside.

This is where the slightly older and larger wombats go to live. Meeting these guys was really special as normally, by the time they get to this age and size (about the size of a smallish spaniel), you wouldn’t normally want to be interacting with a wombat.

While wombats look super cute, they can actually be quite dangerous in the wild – however, because Sleepy Burrows know their animals so well, we were allowed to meet the two female wombats in residence.

This wasn’t so much cuddling wombats as, allowing the extremely heavy furry creature to lean on your leg while you scratch it’s back and fuss it until it’s decided you’re allowed to stop! Completely amazing.

Update: I visited Sleepy Burrows again recently and the ‘teenage’ wombats now graduate to outside, but, that doesn’t mean you might not get to meet a big wombat…meet Phoenix. 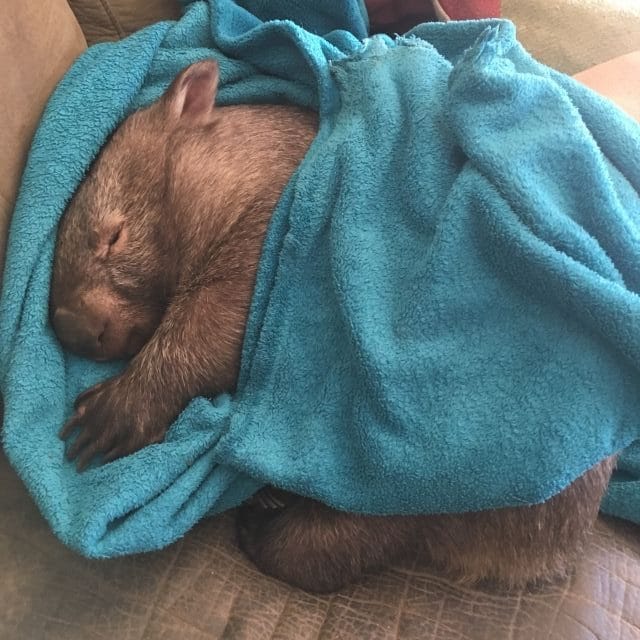 Pheonix had just arrived at Sleepy Burrows when I last went. She was a pet wombat, until her owner realised that wombats really don’t make good pets.

She’s now at the sanctuary being taught how to wombat again – but right now, she’s living in the house, eating her own body weight in sweet potatoes and lying on the sofa – which also involves wrapping herself up in a blanket if she get a bit chilly!

It could take the team two to three years to teach Phoenix enough of how to wombat to live outside on her own – although it’s unlikely she’ll ever be released into the wild, so if you do visit, you might be lucky enough to see her even if you can’t get quite as close as we did.

Lastly we headed outside to tour the rest of the property.

Most of Sleepy Burrows is actually given over to outside space where the wombats gradually become less and less reliant on humans. Donna refers to this as Wombat University as this is where they grow up, learn to fend for themselves and finally leave home.

The two areas gradually let wombats stand on their own four feet – until eventually, they have no human contact at all. They are effectively living wild – but in a safe space.

Once Donna and Phil determine they are doing okay and ready to go, the wombats are released back to safe spots in the local bush.

Despite the fact that she barely gets more than a few hours sleep some nights Donna, amazingly, lets people visit the sanctuary occasionally.

You have to book a few months in advance (and I’m probably not doing anything about my chances of getting to go again by telling you all about it).

The fee to visit is a donation of at least AU$200 per visit.

It costs between $1500-1900 to run Sleepy Burrows every single week and so cash counts but the experience really is incredible and, if you’re a wombat lover, it’s worth every single cent.

Did I mention YOU GET TO CUDDLE A WOMBAT.

While any day when you get to meet a wombat is a good day in my book, I’ve done other wombat encounters elsewhere in Australia but this blew them all out of the water. If you want to check on availability all the details are on the Sleepy Burrows webpage.

Donna is incredibly busy so it might take her a few days to reply to messages – also, if they are very busy with sick wombats they do sometimes stop visits for a little while to get back on top of things so please be patient.

How Else can you Help Sleepy Burrows?

Even if you can’t visit them to meet a wombat you can also help support all the amazing work Donna and the team do.

They are a registered charity and so you can donate to them at any time.

They also run a Wombat Themed Shop where you can purchase all manner of cute goodies for the wombat lover in your life – and the profits go toward helping look after some real ones while you’re at it.

Where is Sleepy Burrows?

It’s located between Sydney and Canberra in a small town called Gundaroo. You can’t get there by public transport, you will need a car to visit it.

We went as a day trip from Sydney leaving at 9 am in the morning, stopping off at Goulburn for an early lunch (and a nose at the Giant Ram) and then left Sleepy Burrows about 4 pm to drive home.

It took just over 3 hours each way.

It’s much nearer to Canberra – the drive to Sleepy Burrows from Canberra CBD would only take about 40 minutes so you could stay there and have a look around Canberra (and try our list of fun things to do there) while you were at it.

I’m not kidding when I say that visiting Sleepy Burrows was one of the best experiences of my life – to get up that close to a wombat, and know that you were helping while you do it was just brilliant. I’m desperate to go back.

What to Read Next

If you’re planning on visiting Sleepy Burrows from Sydney, you might also want to stop at the Bargo Dingo Sanctuary on the way and help them out too – you’ll get to cuddle a dingo via the Dingo Encounter

You’ll also probably drive past the town of Marulan which is a great place to stop for some breakfast en route – and has a cool back story behind it too.

On our second trip to Sleepy Burrows I was desperately trying to make Mr Differentville take a short detour to go and see the Big Potato, but he was having none of it. I had to play the birthday card a few years later to get there. If your driver is more nicer, see more about the Big Potato here.

My name is Helen Foster and I’m a journalist and author living in Sydney.

My travel articles have been published in titles include The Australian, Body & Soul at the Sunday Telegraph, RAC Horizons, Jetstar magazine and more.

I like the weird, the wonderful and anything that makes me jump and down with glee like I’m about three. That’s what you’ll find here.

4 thoughts on “Love Wombats? You Have to See Sleepy Burrows Wombat Sanctuary”