There are many cooking classes in Bangkok – most of them have pretty names involving elephants, colours or spices (or some combination of the three). I choose one called Cooking With Poo, but as much as the name makes me giggle, it wasn’t the reason for my choice.

In fact, there were actually two important reasons why Cooking With Poo was my designated cooking class in Bangkok. 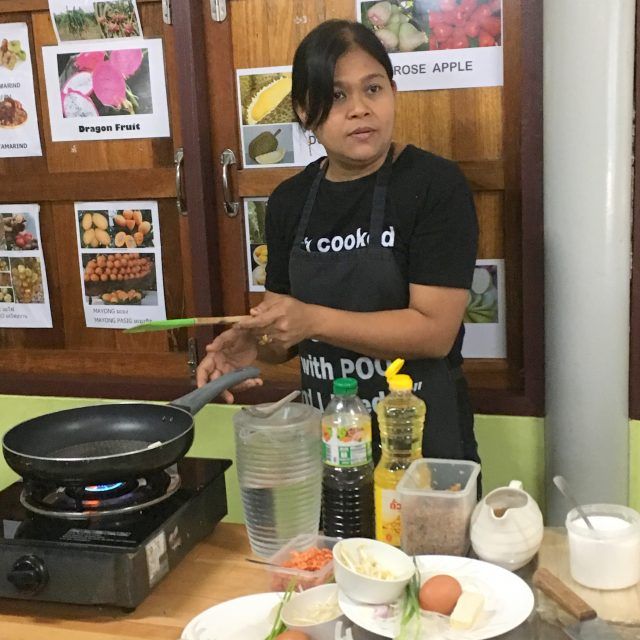 Disclosure: Some of the links in this post are affiliate links which mean I earn a small commission if you use them to book. This does not cost you any extra. Cooking With Poo is not such a link.

Why I Choose to Visit Cooking With Poo

The first was that the class started with a trip to Klong Toey market, the biggest wet market in Bangkok.

I really wanted to visit it but wasn’t sure I was going to have time to go under my own steam so, the idea that I would a) go and b) actually discover what some of the unusual things I was seeing were was Cooking With Poo’s first lure over the competition.

The second reason was the owner. Cooking with Poo is named after its founder Khun Poo who grew up in the Klong Toey slum in Bangkok. About a square mile wide and home to around 100,000 people Klong Toey is a tough place to live and, in 2007, Poo was struggling.

She’d been selling food to her friends and neighbours to get by, but the ingredients were getting more expensive and her regular customers couldn’t afford a price increase. Poo started looking for a new job.

At the time an Australian was working with people in the slum and, having tasted how good Poo’s cooking was, he suggested she started offering cooking lessons to tourists – at the time, she didn’t speak English and the school was run out of the front room of her home, but it slowly became a success.

Now, ten years later Poo not only speaks excellent English, she has a dedicated cooking school (still in the slum) and employs numerous people from the area in her business. In fact, the school is now officially called Cooking With Poo (and Friends) to show how it’s expanded. By choosing them, therefore, I’d also be doing some good. I was sold

How much is Cooking with Poo?

The class cost 1500 baht (£34 or 59AUD at the time of writing) which included transport, the Klong Toey market tour, your cooking lesson and whatever you cooked to eat.

What Happened on The Klong Toey Market Tour

We met at 8.30 outside a hotel close to Phrom Phong BTS station. There were two minibuses full of people – 12 of us in all. First order of business was to head to Klong Toey.

Just in case anyone wasn’t aware of this, Poo warned us that wet markets are not like the supermarkets most of us are used to.

She told us we would see live animals (and maybe some of them might not be live for long) and offered anyone who would find this uncomfortable the chance to opt out of this part of the lesson. (NB: Don’t panic, cute poochy above is not for sale – he belongs to the stall owner)

When we got to Klong Toey market the main aim was to buy the ingredients we needed, but we still got to see some of the quirkier things on sale like frogs, insects and ant eggs.

I love unusual food so learning all about how these things are consumed from Poo’s colleague Noi who was escorting us around, was fascinating.

For example, I’d seen bugs like the ones below on sale before and thought they were giant cockroaches – but no. They are water beetles most commonly used to make the chilli sauce nam prik – but sometimes eaten boiled or fried then covered with salt. 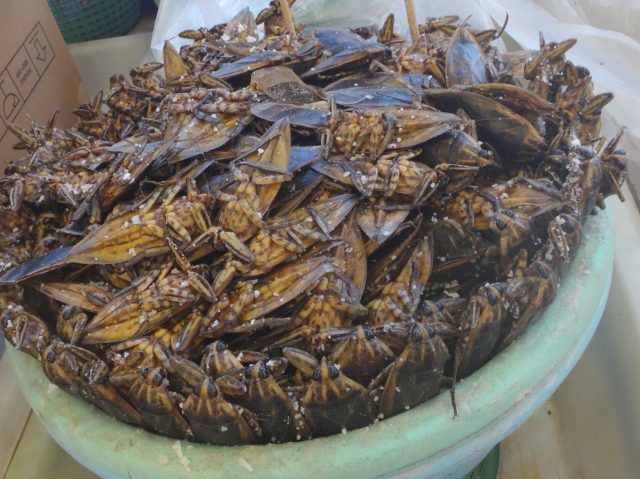 Next stop was the fruit and vegetable section and Noi was really good at not only buying what they needed for the class, but telling us about fruits we might not have seen before, and getting the best price for people who wanted to buy their own supplies to take back to their hotels.

I could have stayed in the market listening to Noi all day and taking 1000 photographs…but apparently, when you book a cooking class in Bangkok, you can’t just look at food, you have to actually do stuff with it! 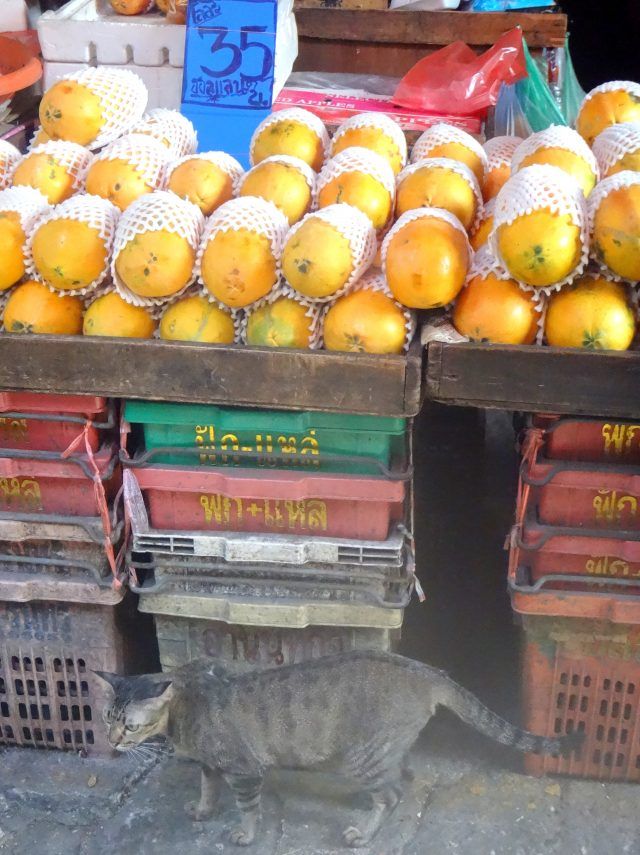 I have to start this with a disclaimer. I don’t cook!

In our house, The Boyfriend cooks, I warm things up out of the freezer. It’s so bad I even had to call him the other night to find out how the grill worked. I fancied cheese on toast, I assembled the ingredients, put it under the grill and stared at it for 10 minutes while nothing happened as I had it on the wrong setting!.

To say a cooking class is not my normal home is, therefore, an understatement…so, the fact that I not only enjoyed Cooking with Poo, but I produced three edible dishes is nothing short of a miracle – and probably all you need to know as my review! But I supposed I should give a bit more detail. 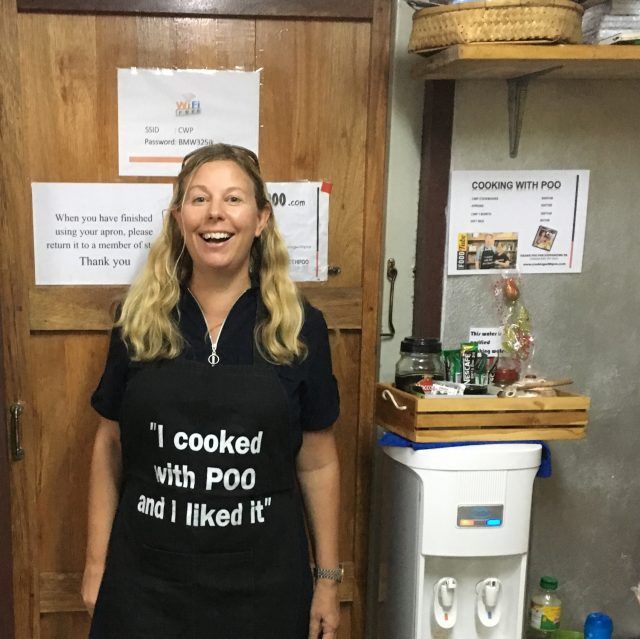 What Did We Cook?

The meals you get to cook vary on which day you attend the class – I was there on a Saturday when the menu was Lemongrass Salad – which I wasn’t sure about – Massaman Curry (yum), Pad Thai (always a winner) and Mango and Sticky Rice.

If there’s something you particularly want to learn to make, ensure you book for the right day. Other dishes on the list include the coconut soup Tom Kai Gai, the spicy salad Som Tum, Green Curry, Tom Yum soup and the noodle dish Pad See Ew

We divided into two groups of six – one would cook while the other ate.

All the food items were pretty much prepped (thank heavens) and so, it really was a case of just getting on with it. Poo cooked first so you could see what was going to happen – then it was my go,

SHOCK ALERT – Thai cooking is really, really, easy (if you have someone to do the prep for you anyway).

That Lemongrass salad that I wasn’t sure about, was surprisingly my favourite dish – and in making it, I learned two really useful things.

How to properly cut and squeeze a lime to get the maximum juice from it and, that when you’re broiling chicken, if you chop it into tiny, tiny pieces with the side of a spatula you’ll create a mince-like effect which, when you add your delicious Thai dressing to it will taste AMAZING. 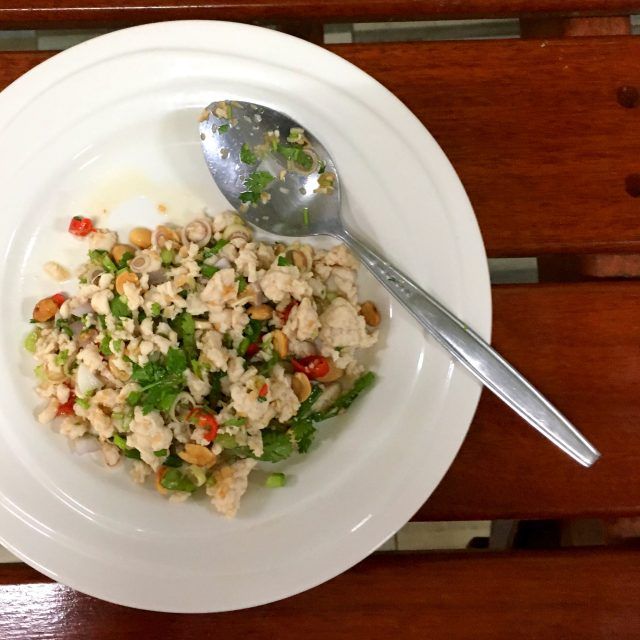 And I made a Massman curry, a dish I’d never have dreamt I could create – although by that point I’d eaten all the salad and an entire plate of Pad Thai and I was STUFFED – and I have a very healthy appetite! Do not have breakfast before you come to the class or you’ll never fit in all in.

The four-hour session class finished with a sampling of some of the more interesting Thai fruits we picked up in the market. We also got a tiny bag containing the recipes we’d cooked that day so we could make them at home (shhh, don’t tell The Boyfriend) 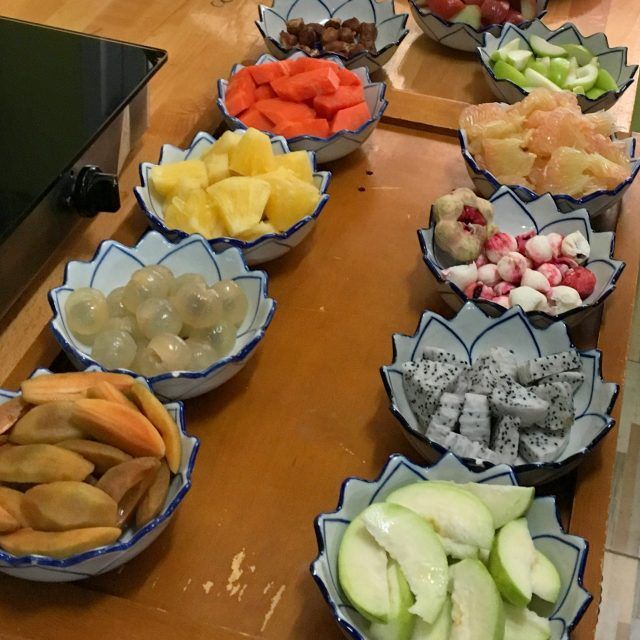 Just before it was time to get back on the bus to be returned to our pickup point, Poo took us over the road to a small shop run by one of her neighbours that sold handicrafts to take home for souvenirs. There was no pressure to buy, but, if you did you were obviously helping out someone else from the slum.

You can also buy the Cooking with Poo apron I am happily modelling above and Poo’s cookbook – but again, there was no hard sell for any of it.

What did I think of Cooking With Poo?

I really, really enjoyed it. Poo is a natural entertainer – she’s really funny, tells brilliant stories and makes the process of cooking fun (something I never thought I’d ever say).

Not only did I learn a few (much needed) cooking skills, I got my tour of Klong Toey Market (and trust me, it’s taking all my willpower not to fill this post with pictures of that) and, to get to the school, we visited Poo’s slum, part of Bangkok it wouldn’t feel appropriate to see on my own.

Wandering past the tiny houses, seeing people go about their daily business was humbling – but knowing how much Poo is putting back into the community and hearing her talk of what each resident was doing to change and improve their lives was inspiring.

That to me was what made Cooking With Poo stand out in Bangkok. Anyone (except me) can teach you to make a Pad Thai, but not everyone can help a community while they do it.

And, no it doesn’t hurt that the name is really funny!!!

Note: According to the Cooking With Poo website, the class is going to be moving to new premises at some point in the future – a more rural setting.

This means the kitchen is no longer located in the slum and it doesn’t specify if you’ll still visit Klong Toey wet market (though as they collect from the same place and many of the vendors Poo visits are her friends and neighbours, I suspect they still will). Do check exactly what stage they are at before booking if that part of the experience is important to you.

The new premises do look lovely though.

If you want to book with Cooking With Poo in Bangkok, visit their website where you’ll find all the details. Don’t forget to check exactly what’s on offer on the day you choose via the Classes/Menu section which is under the Cooking Classes section.

The Amari Watergate: Our Foodie Hotel in Bangkok

During this part of my Bangkok trip I stayed at a hotel called the Amari Watergate which is an absolutely brilliant hotel for foodies.

The buffet breakfast is enormous with every cuisine known to man; it’s a brilliant place to fuel up before a long day trip. They also offer buffet lunch if you fancy a lazy day. When we were there they were gearing up to open their cheese and wine room.

The Amari Watergate is also near some of Bangkok’s best street food like the Tom Yum at P’or and the chicken and rice at the two stalls in Pratunam that compete for the title. It’s also walking distance from Siam Paragon – the food hall of which is just incredible. I can spend hours in there.

Want to tell more people about the good Cooking with Poo can achieve, then why not share the post on social media. Doing so ensures your chillis will always be the right heat for your mouth in the future! 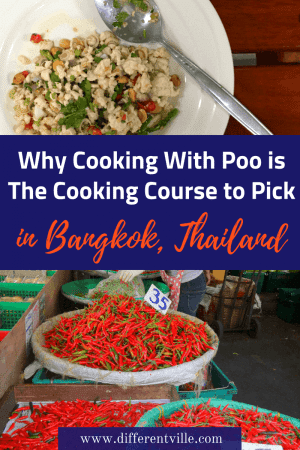