Goat Island is a marine reserve about 85km north of Auckland. It’s also home to New Zealand’s first clear bottom kayaks known as a Clearyak. Watching fishies while getting some exercise sounded awesome so we hopped in the car for the short 70-minute ride from Auckland to Goat Island ready to paddle. 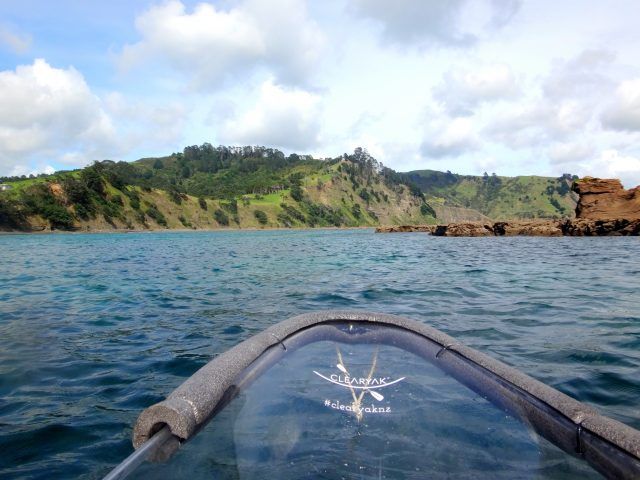 The Clearyak versus a Normal Kayak

My first thought as I hopped into the Clearyak and settled down was how comfortable it is. It’s deeper than a normal sit on top kayak and actually has a proper built-in seat for you to rest your back. This makes a huge difference to the comfort level as you’re not relying as much on your core muscles to support you.

I normally end up with aching hip flexors after kayaking, as they take over from my non-existing abs, but I had no such problems in the Clearyak.

One problem we did have though is that Clearyaks only come as a double kayak – something once referred to by a friend as ‘divorce boats’ – and yep, The Boyfriend and I did have a few screeching moments as the current pushed us nearer and nearer the shallow rocks that surround the right-hand side of the bay.

Obviously, with a clear bottom kayak, scratching the base is a big no-no and so, you need to do the best you can to keep it away from rocks. 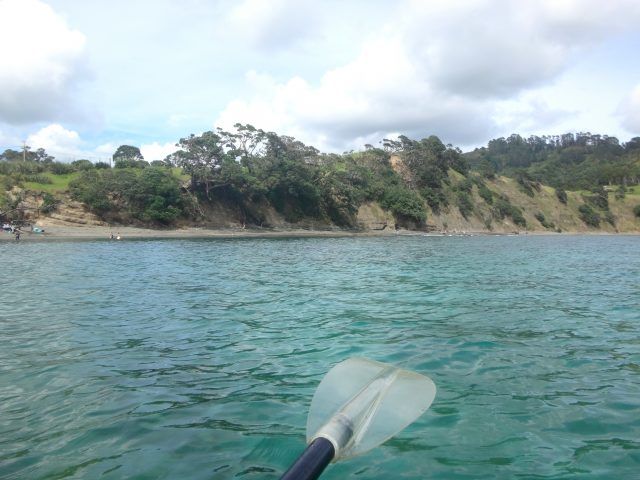 When we steered clear of that current though it was actually a pretty easy paddle – well when we bothered to paddle that is. See, the biggest difference between normal kayaking and Clearyak kayaking is you want to spend most of your time floating about staring down at the bottom of the kayak rather than powering through the waves at top-notch speed. As such, this is not really a workout session, it’s a chill out session.

However, I did find that staring at the bottom of the boat, rather than out to sea as in a normal kayak, did make me feel a little bit sick.

Admittedly I had indulged in some of New Zealand’s finest lager the night before and was kayaking on an empty stomach so that might not have totally been the Clearyak’s fault, but if you do get seasick easily maybe take a pill first.

What Fish Will You See in Goat Island?

Why heartwrenching? These pretty red fish mate for life ‘so, if you see one on its own, it’s either hasn’t met its mate yet or it’s lost its partner and will be alone forever,’ said our Clearyak fish guru and kayak handler Savanna.

Thankfully, we didn’t see any Red Moki on our travels as if I’d just seen one I’d probably have capsised us desperately spinning around trying to spot its buddy – and if it didn’t have one, trying to fix it up with another passing fish on Fin-der (or whatever the fish dating app is called) or worried about it spending its life alone. 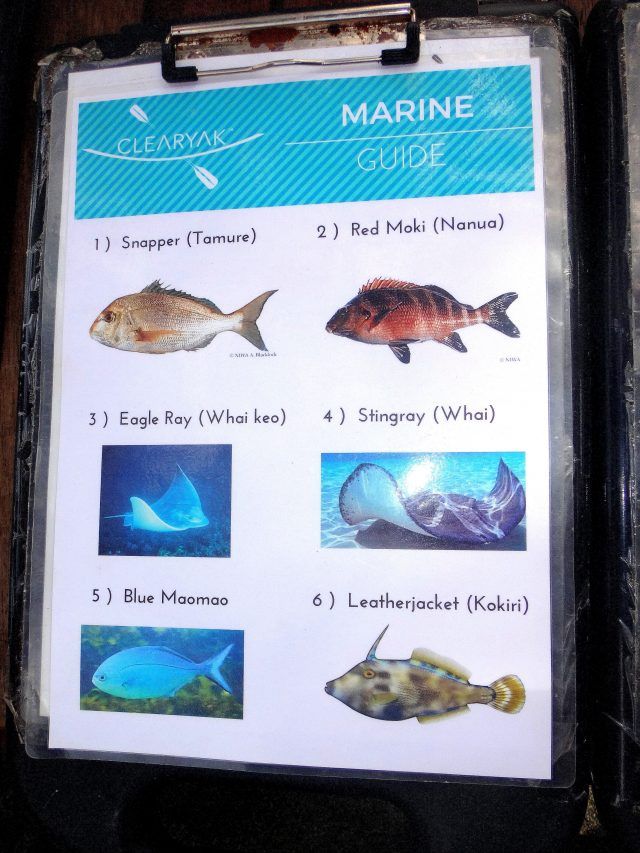 We did see a heap of snapper though – it started with one lone fish who first swam one way under the kayak and then the other – then started following us under the boat.

I’m not sure if he was really confused as to why he could see feet and a purple bikini-covered butt above him in the water and wanted a better view, or if he thought we were handy protection for anything scary, but he stayed with us for a good few minutes. And then, about three of his friends joined him and we had a school of sparkly snapper hangers-on. 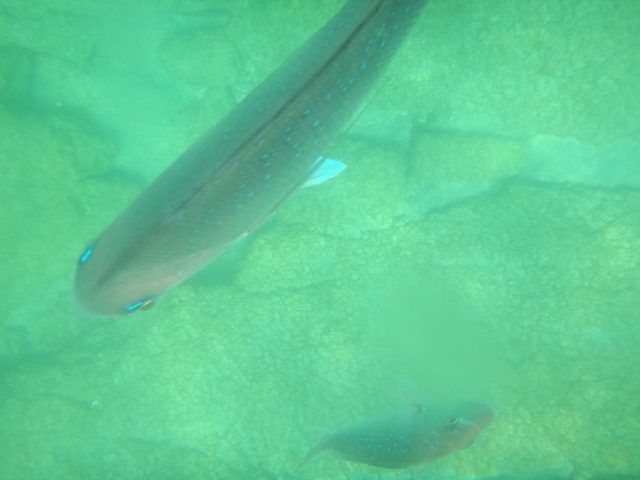 Visibility-wise though the Clearyak was excellent and it was easy to see right down to the seabed.

I really wanted to see a stingray, but there had been some pretty bad storms the week before we arrived so not only was the water not quite as clear as normal, a lot of the fish that normally frequent the shallows of Goat Island had headed out to the slightly deeper waters. Surprisingly, I did see a stingray somewhere very unusual a few days later, but there’s more on that to come in a later post.

You do get the odd dolphin and seal at Goat Island, so keep your eyes peeled in case you get super lucky.

How much does the Clearyak cost?

It cost NZ$60 for half an hour to hire the Clearyak which definitely wasn’t cheap – and the main reason we went down the ‘divorce boat’ road rather than paddling a boat each.

Because the Clearyak has a limited area in which you can paddle, I think half an hour is definitely long enough – unless the seal or dolphins are about.

For maximum enjoyment, time your visit carefully though – try and go as early in the morning as you can. Our session was booked for 10.45 on a Friday and when we went in the water there was a limited number of snorkellers to avoid.

As our session finished though heaps of people started turning up to snorkel and to board to the glass bottom boat that also sails round Goat Island.

I think it would be a more stressful paddle the more people there are in the water. The snorkellers we encountered got a bit nearer to us than I might like and I was worried about banging into them – possibly because they can’t really see the kayak that well from a distance (it’s see-thru after all). 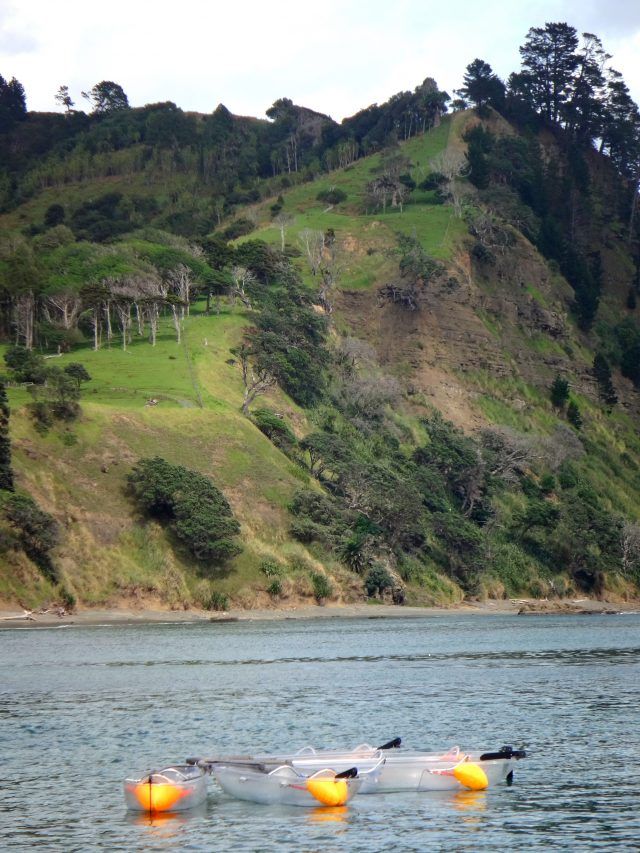 Another benefit of going early. The fish like people. They’re very used to being around them and Alex, our second kayak wrangler, told us that in the morning they actually hang around the shallows waiting for people to arrive.

If we’ve convinced you that spending the morning bobbing about on a clear bottom kayak in Goat Island is a fun thing to do, book your Clearyak in advance via Tour Shop.

Note: they won’t let you go out in the kayaks if the weather is bad, so maybe book the kayaks for the beginning of any stay in Auckland, just in case they have to cancel you – it’ll give you time to rearrange.

Is there anything else to do on Goat Island?

The selling point of the area is the marine life so, you’re looking at all pursuits aquatic!

You can snorkel – masks and fins are available for hire or you can bring your own. It’s a big dive site but, if you’re with someone who doesn’t want to get their feet wet, there is a glass-bottomed boat that goes out three times a day when the weather is conducive to viewing. It costs $30 per person for the 45-minute trip. Here’s where to book and check if they are sailing. 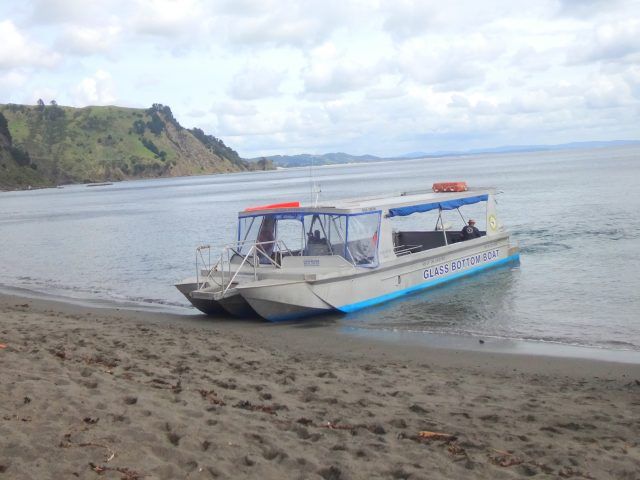 The nearest town to Goat Island is Leigh where you’ll find the Leigh Sawmill Cafe which is a good place to stop for lunch – or, hit the fish and chip shop and eat your takeout with a view of the sea.

We didn’t stop in Leigh this trip as we had to hit the nearby town of Matakana, famous for its yummy gastropub and artistic toilets. Yes, toilets – read more about how to spend a great day in Matakana here. 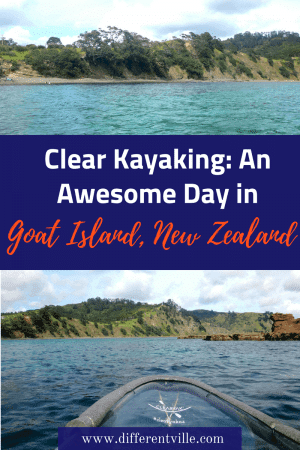