Just outside of Adelaide, South Australia in a town called Gumeracha stands The Big Rocking Horse, Adelaide. It’s officially The Biggest Rocking Horse in the World, was voted the No1 Big Aussie Icon by Wotif – and, guess what…you can climb it.

But scaling the BRH isn’t the only thing to do here, there’s added kangaroos to play with too in the Gumeracha Wildlife Park. 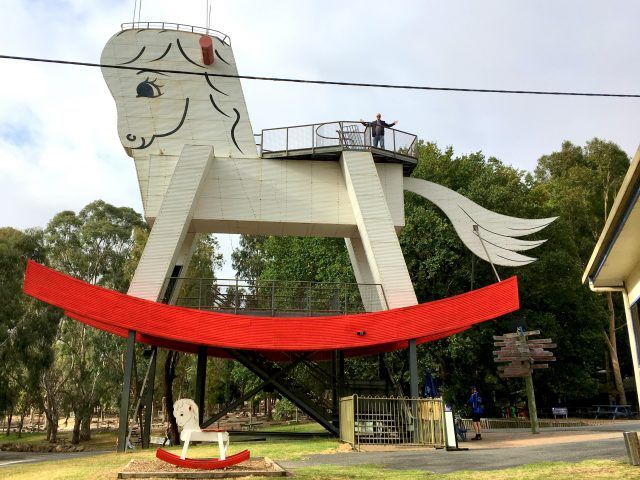 Why a Big Rocking Horse?

Why not? Although it makes more sense when you find out that the Big Rocking Horse location is also a working handmade toy factory.

Interestingly, The Big Rocking Horse isn’t the first giant animal to appear on this site.

Back in the 1970s when the Australian trend for chucking big things on your property to attract the attention of passing drivers began, there was a huge giraffe here, but, a few years later, in a far more obvious move considering the whole toy-making thing, the giraffe was replaced first by a three-metre high rocking horse.

That was deemed too small so a slightly bigger one arrived – then, eventually, what’s officially been measured as The Biggest Rocking Horse in the World was ushered into place in 1981.

The Big Rocking Horse, Adelaide is 18.3 metres high and weighs 25 tonnes, however, my favourite thing about its facts and figures is that it’s set into 80 tonnes of concrete to, erm, stop it actually rocking!

Over the years around, hundreds of people, including children, have climbed it. I, however, am not one of them!

I paid my £2, skipped happily up to the first set of stairs on the rockers and looked around and then headed off to the legs to go up to the next bit – only to find ladders.

I can’t climb ladders – it’s the one part of my fear of heights I simply can’t master in any way at all (I haven’t even been in my own loft) so, The Boyfriend headed up there for me. Although in a way that came in handy because it meant I could take a photo with him in it for scale – look carefully above!.

After he spent about five minutes wandering around up the top, he headed back down and we made our way to the other exciting attraction at The Big Rocking Horse – the Gumeracha Wildlife Park and its kangaroos. 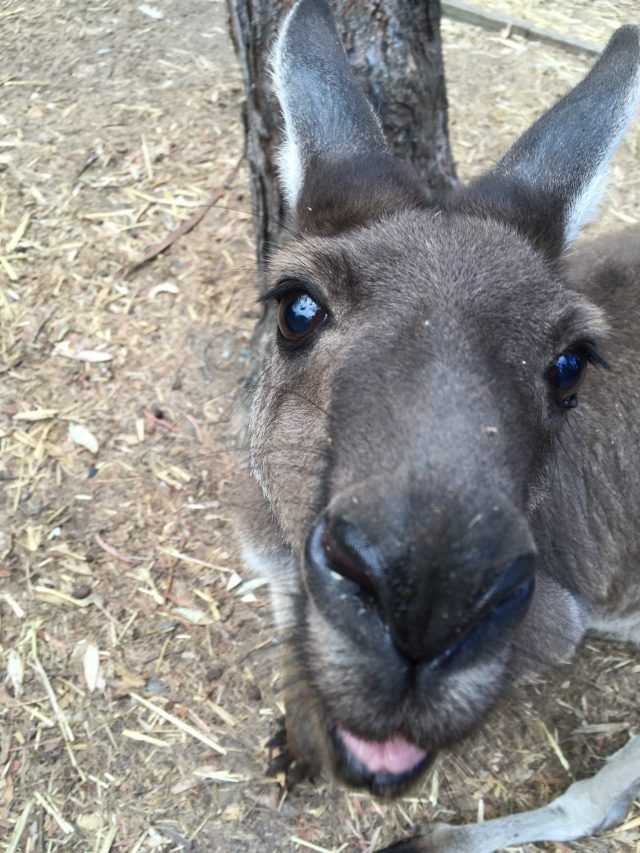 I’ve lived in Australia now for over four years in total but the animals here still fascinate me so the fact that The Big Rocking Horse has a petting zoo (officially known as the Gumeracha Wildlife Park) containing a few rescue roos that you can feed delighted me.

It costs just $1 per person to go into the roos enclosure and $2 each bag of food you buy to treat the cuties with. You’re going to need at least one.

When we got in there the roos were having their breakfast and so a few of them were far more interested in munching their potatoes than what we had to offer, but we soon managed to attract a few willing snackers. 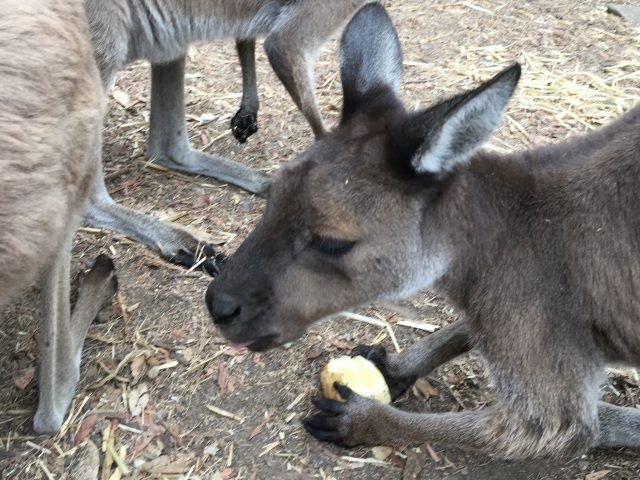 If you’ve never come up close and personal with a roo, there are a few unexpected things you might notice.

Firstly, they are ridiculously soft – their fur doesn’t look like it’s going to be silky so it’s always a surprise when I stroke one and remember.

The second thing is that they like to hold your hands. 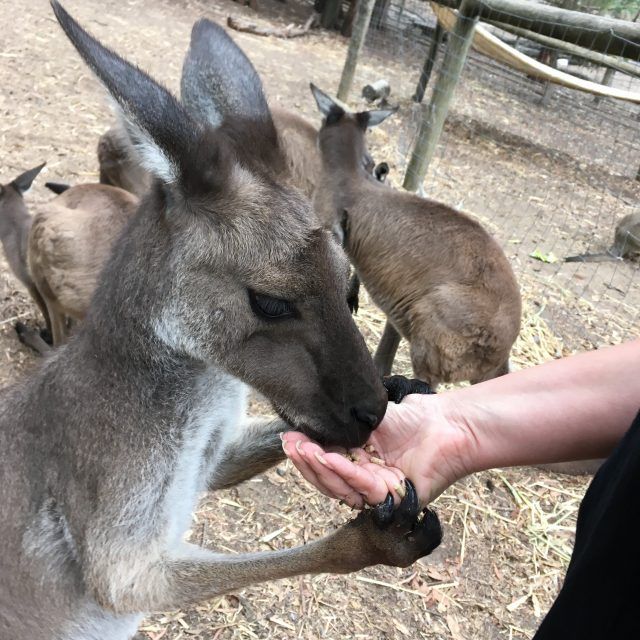 This isn’t the first roo that’s done this to me while I’ve been feeding it. It’s as if they’re saying, ‘okay, you’re here now, I’m being adorable and so I’m just going to hang on here until that bag of goodies is empty okay. Don’t think about going over there to the other ones. You are my human.’

While the roos were the main attraction, The Big Rocking Horse also has a few other residents – wallabies, ducks, alpacas, a couple of peacocks and some very chatty cockatoos. For the $3 each we paid (entry and food) it was an absolute bargain.

There’s also a cafe on-site, a toy shop and the Gumeracha Toy Factory which is a working toy factory.

♥ READ MORE The Best Place to See Kangaroos in Perth ♥

How Long Should You Spend at The Big Rocking Horse?

We got there shortly after it opened which was definitely a good plan as the only other folk around were one family and a couple of cyclists.

We spent about an hour climbing The Big Rocking Horse and playing with the roos and by the time we came out there were probably about 10 other groups of people arriving.

While it might be officially the Biggest Rocking Horse in the World, it’s not big enough to share with more than about four other people so, if you’re visiting on a weekend, the closer to their 9 am opening time you can arrive the better.

Where is the Big Rocking Horse, Adelaide?

You’ll find The Big Rocking Horse at 452 Torrens Valley Road, Gumeracha. It was about a 50 minute, fairly winding, drive from our apartment in Central Adelaide.

What Else is Near The Big Rocking Horse?

While you’re there you might also want to take a trip to the nearby National Motor Museum at Birdwood which is full of classic and quirky cars (including one shaped like a telephone), or, do as we did at visit the absolutely incredible Whispering Wall.

This is a dam which is curved in such a way that one person can stand at one end, someone else at the other and speak in a normal voice and you’ll hear each other as clear as day. Again, this is another place it’s good to get to early to make the most of the acoustics. 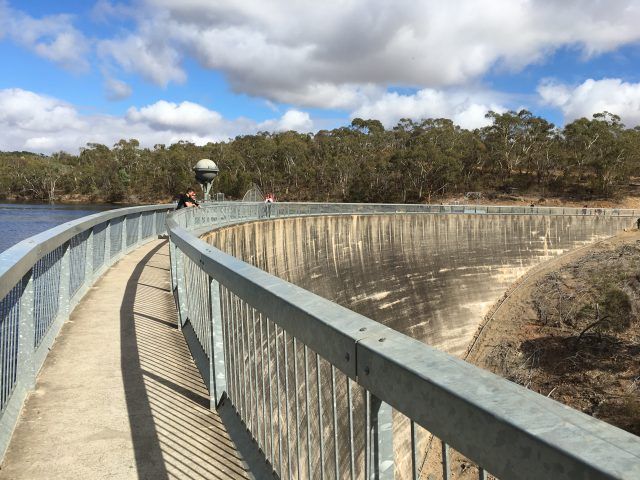 The Big Rocking Horse is also very close to the wineries of the Barossa Valley. We were there on Good Friday so all the wineries were closed, but on a normal day you could also factor in a visit to a few cellar doors while you’re there.

In fact, you fancy seeing The Big Rocking Horse, the Whispering Wall and partaking in a few wine samples afterwards, there’s a tour available that visits all three. Check things out here.

Animal lovers might also want to check out Gorge Wildlife Park nearby. While you might just have seen the roos at the Big Rocking Horse, they don’t have any koalas here ( in fact, there’s a sign that says if you spot any, they aren’t tame and have just wandered in from outside so don’t touch), Gorge Wildlife Park not only has koalas, South Australia is one of the few states left where you’re allowed to touch them. So, if that’s always been a dream of yours, it might be worth a look. 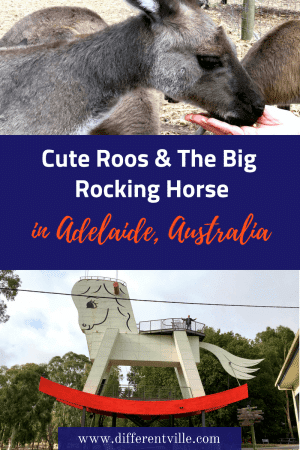