BBQ Buoys might sound like a bad boyband or a street gang who come at their enemies wielding sausages, but it’s actually one of the most fun things you can do in Adelaide. We gave one a spin (literally) down the River Torrens and had an absolute blast. 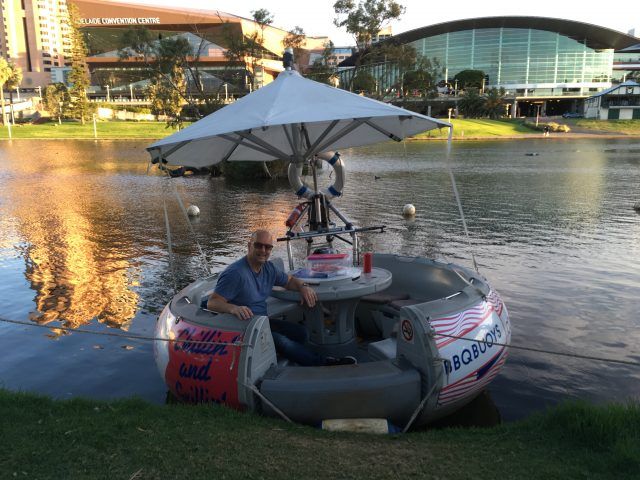 The concept of the BBQ Buoys in Adelaide is simple. It’s a little round boat with seating for between two to ten people round the edge – so far, so looking like something you’d see on a lake in Disneyland.

However what makes BBQ Buoys different is what’s in the middle – depending on your munchies of choice, you can either have a picnic table that you can fill with all the cheese, biscuits and other nibbles your heart desires, or an actual working gas barbecue on which you can grill sausages, burgers, or, as you’re in Australia, chuck a shrimp on it!

There’s also a speaker for music and an esky (ice box for anyone not up on their Australian lingo) for your bottles and, my favourite, little touch – cup holders!

While this sounds like THE most Aussie invention ever, the idea was brought from Germany, where the boats are called BBQ Donuts which is a pretty good description.

They’ve been working in Adelaide over a year now and, other than a few weeks off in the middle of the winter, they’re a year-round deal.

BBQ Buoys gave us the chance to give one of the boats a spin when we were in the city recently and it was one of the highlights of our trip and definitely one of the more unusual things to do in Adelaide.

Where can you sail your BBQ Buoy?

The boats launch from Pinky Flats very close to the Adelaide Oval. During the day you can sail them between Frome Bridge to Torrens Weir – which is about a 2km distance.

We however, took command of our vessel just before sunset.

As darkness falls, so does the area at which you can take your Buoy, we were therefore restricted to sailing between King William Road bridge to Torrens Weir, roughly 1500 metres downstream. The only other no-go zone was around the fountain in the middle. 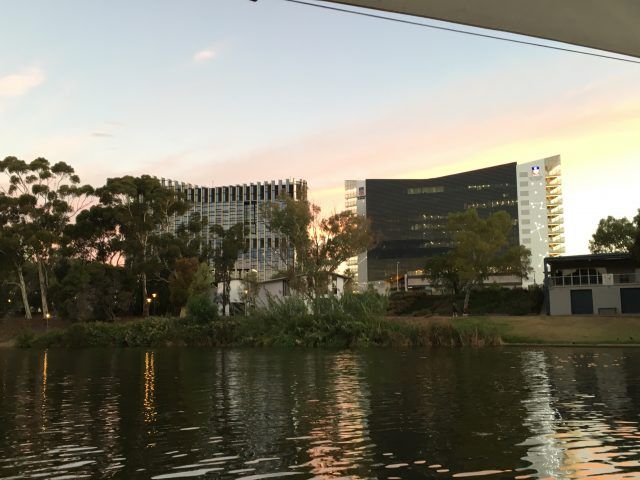 The smaller area didn’t spoil things at all – the boats travel at less than 10 knots so you’re not exactly speeding up and down.

We had a fantastic time puttering up and down looking at the Adelaide Oval, the super space-age SAHMRI building and, the new Royal Adelaide Hospital, currently the most expensive building in Australia and the third priciest worldwide.

Oh, and the gorgeous pink and orange sky wasn’t too shabby either. 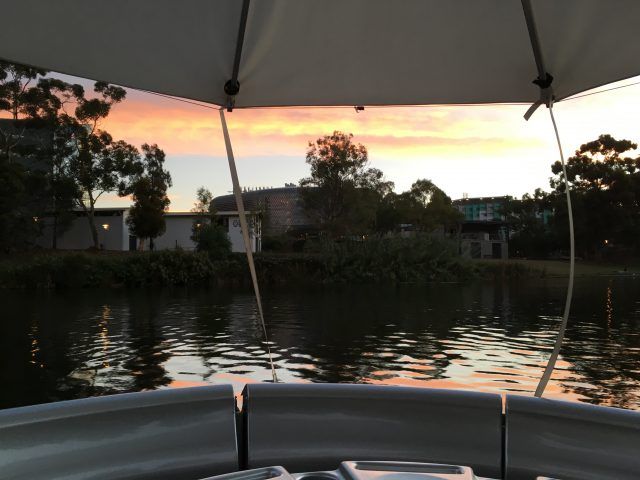 Because it was a spur of the moment thing, we didn’t have anything to BBQ, but, to be honest, I’m more of a picnic girl myself and even if we’d planned weeks in advance we’d have turned up laden down with cheese, crisps, dips and bread rather than half a raw cow.

We did however, get a couple of beers to enjoy as we floated. A bottle of the local brew Coopers was pub prices at $7 (or $29 for six). If you prefer wine, you’re looking at $29 for a basic bottle, $49 for more premium brands (I can firmly recommend the Alpha Box and Dice Prosecco after visiting their vineyard on this trip).

Yes, you read that right – alcohol is allowed on the BBQ Buoys with a few simple rules.

You can’t take your own brews on board, you have to buy them from the rental shop (they can legally supply the equivalent of three standard drinks per person per hour).  Your skipper – in our case The Boyfriend – must also stay under the legal driving limit.

What this meant for us is that while I sat sipping a beer and taking endless selfies throughout the trip, himself, saved opening his until the last ten minutes figuring that it probably wouldn’t even have left his stomach by the time we went back to shore let along started tipped him over any safety levels.

When it comes to food, feel free to bring your own – or, you can book platters to be served on board.

How Easy is the BBQ Buoy to Steer?

This is probably what I loved most about our trip. The Buoys seem to be an argument free zone.

Normally, when himself and I go on any kind of water-based transportation, it ends up in a row while we narrowly avoid bumping into things or going places we shouldn’t – there was no such issues with the BBQ Buoys though.

Partly, because the river is huge and so there’s no much to crash into anyway but also because these things have a seriously nippy turning circle.

The end of your route is a weir and, mindful of potential danger, I started mentioning this from about 500 metres away. As normal, The Boyfriend decided to ignore me for a good hundred metres, but when he did decide to turn the Buoy, it literally spun in quite possibly the best pirouette I’ve seen since the Commonwealth Games.

My stress level went down about 800 notches after that and I completely relaxed.

The evening was balmy. The river was calm. Birds flitted past. The swans on the bank were settling down for the night and as the famous Popeye boat sailed past us with opera singers serenading people on board and the sky got brighter and brighter around me it was seriously like something out of a film.

As we pulled in, another group of Buoyers was also pulling in. The beaming smiles on their faces and the clinking of empties, lead me to believe they’d enjoyed things as much as we had.

How much is the BBQ Buoy

A one hour boat for two costs just $69, The more of you there are the cheaper it gets. the bigger boat that seats 10 costs just $149 for an hour or $249 for two. You can bring your own food, but, as I said above, have to buy your drink from BBQ Buoys HQ.

Your driver must be over 21 and have a driving license to take control of things.

To find out more, check out their website where you’ll find prices for hire, booze and food, get your questions answered and can make a booking.

Disclosure: BBQ Buoys Adelaide allowed us to use the boat free of charge so I could try things out for this review. However, that doesn’t influence my opinion or reporting on the experience. It really was brilliant fun and I’d love to do it again – this time with added chips and dip! 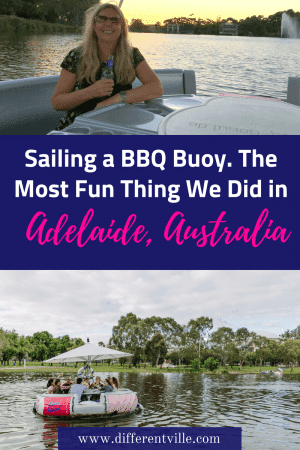