Normally when I’m in the vicinity of London’s Brick Lane I’m on the quest for curry, street art or a bagel at some unsensible hour of the morning – on this trip though I was on the quest for fur, feathers and cuteness at Spitalfields City Farm. And what I found there took it straight to the top of my list of things to do in East London! 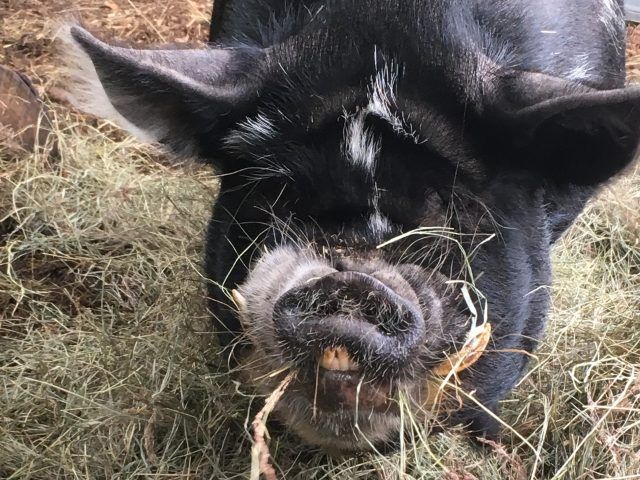 The first time I saw this Spitalfields farm listed on the map I was expecting some kind of posh allotment attached to an artisan Farmer’s Market selling chutney and heirloom tomatoes.

But, a quick google told me that as well as plants, this inner-city farm had animals – including goats, sheep, bees, cats and, the super-cute miniature donkey’s Gilbert and Sullivan and their bigger donkey friend’s Derek and Bayleaf.

Come 10am the next Saturday morning I was the first person through the door.

The History of Spitalfields City Farm

The Spitalfields Farm started life in 1978 at which point it was there merely for growing vegetables. Over time though people started to keep chickens and rabbits there too – and, years later a full-on land of agri-magic has developed. Now it’s 1.3 acres of cute animals, thriving plants and fantastic theming.

Despite its size, walking to the farm is an exercise in faith, as, until you’re virtually on top of it, you can’t actually believe it’s going to be there. This is not somewhere you expect to find wildlife – unless it’s a wily urban fox, maybe a pigeon or six.

It’s sandwiched on one side by the street art and trendy shops of Brick Lane, on the other by a railway track and on the third by houses and flats. It’s literally a hidden treasure right in the middle of the East End. 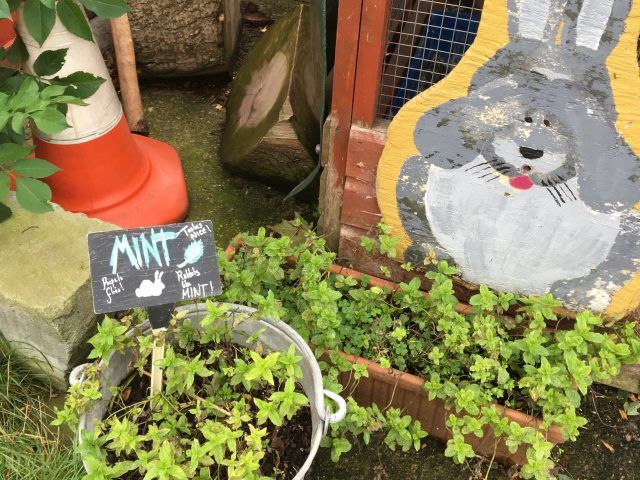 What Animals Will You See There?

All of the cute farmy-type creatures – every single one of them lovingly named.

As well as those listed above, you’ll find ducks, rabbits, some very fat, tusky pigs, guinea pigs and a ferret called Marmite who has a lot of tunnels to play in.

The local squirrels also pop in now and again – mainly to make off with bits of sunflower and other treats from the garden.

The first occupants I see are the aforementioned donkey’s Derek and Bayleaf who are heading into their day pen after a walk around the grounds. I head over excitedly to get a photo – to be greeted by the sight of firmly planted donkey butt!

Derek, Bayleaf and their adorable mini-horse friends do not care that I want a photo of them to put on my blog as, right now, in their stall contains whatever the donkey equivalent of a full English breakfast is and they are munching their way to the end.

No matter how much I make noises like a carrot or promise them Instagram stardom, they will not turn round to face me. I give up and turn my attention to the herd of goats that live behind him. This is much more successful.

The goats have a playground and half of them are currently on a climbing frame. The other half are watching them in what seems to be some kind of hoofy version of Spitalfields Ninja Warrior as the first set of goats try and push each other off the climbing frame by butting heads.

And then there’s this fella who just wants their head scratched.

So far, the goats have won the prize of the most entertaining animal of Spitalfields City Farm. 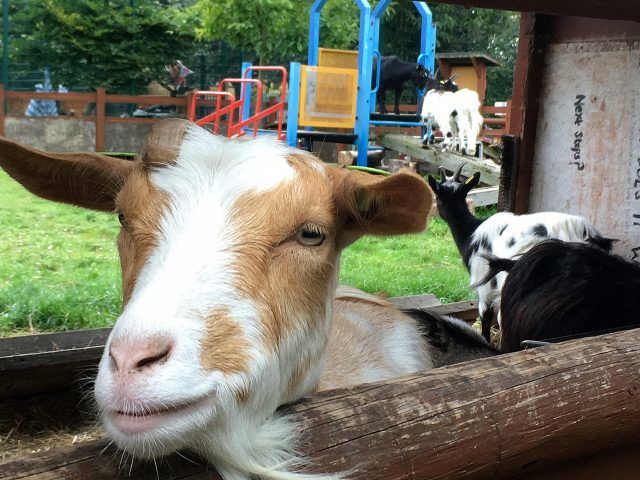 That’s not surprising really though as they are celebrity goats – the stars of the Oxford and Cambridge Goat Race that the Spitalfields farm puts on every year the same day as the famous University Boat Race takes place on the Thames.

The Goat Race sees two goats, one representing Oxford, one Cambridge, go head to head legging it (or gently sauntering if that’s what they feel like on the day) down a pathway cheered on by about 1200 excited spectators.

Thankfully there are not 1200 people here today, in fact, for the first 15-20 minutes, it seems like I have the whole farm to myself – which, considering it’s a Saturday morning in the heart of London feels like some kind of miracle.

Wandering further into the farm I’m absolutely entranced by the place. If the cuteness of the animals themselves wasn’t enough – Holmes and Watson, the well-loved whiskery KuneKune pigs will apparently sit if you ask them nicely – the detail surrounding them is just lovely.

There are signs giving information about the animals – including their names and where they came from  – and little bits of information like who eats what and how you grow plants are dotted around every corner, Sleepy cats also seem to pop up everywhere!. 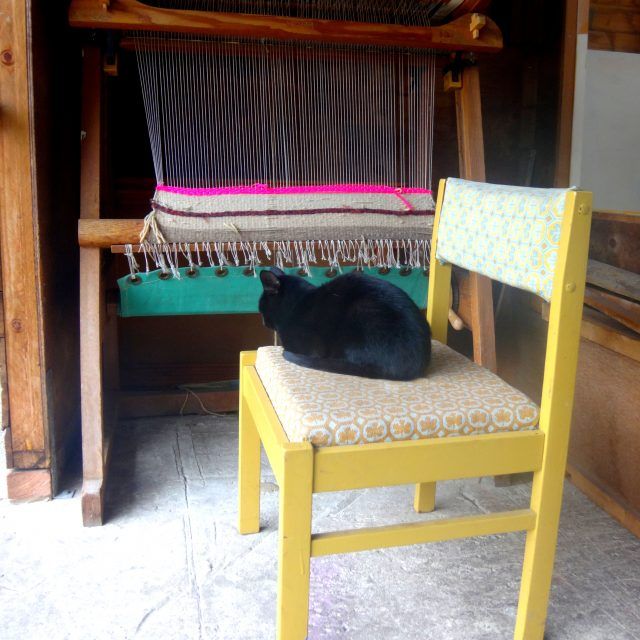 My favourite touch though is the home in an old phonebox of a group of sheep called the Worshipful Company of Woolman.

You could explore here for ages and still not spot all the little things that make it special; there’s something around every corner. Street art fans take note: you’ll also spot work by local artists like Stik dotted around the place as well.

How Long Should You Allow For Your Visit?

I spent an hour at the farm before I had to go be somewhere else and it wasn’t quite enough, I saw the whole place but it’s such a fantastic happy atmosphere I could have stayed so much longer trying to get Holmes and Watson to sit or scratching Hamish the pygmy goat behind the ears.

If you’ve got little kids I’d definitely allow half a day. You might also need longer if you want to get a picture of those donkeys….they were still eating their breakfast as I left! 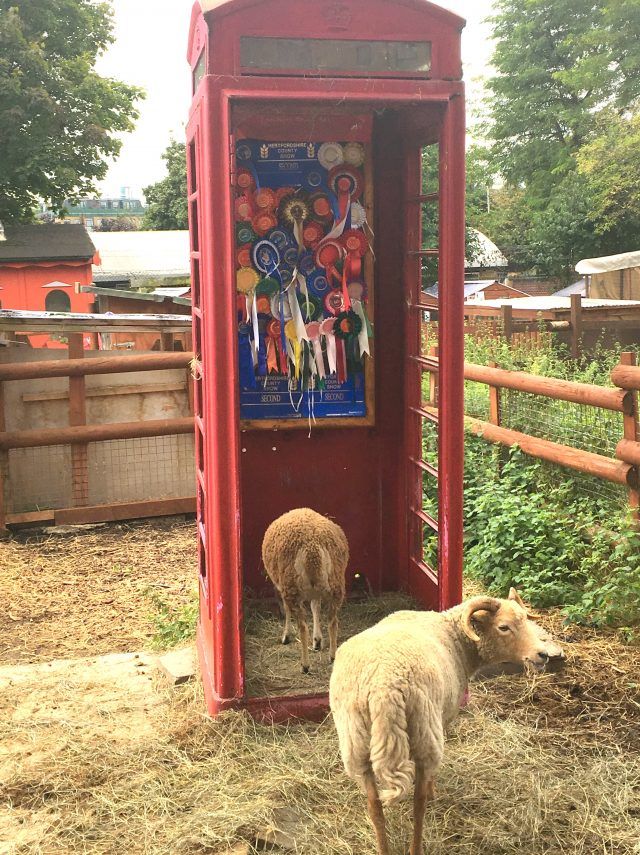 How to Get To Spitalfields City Farm

The nearest tube station is Whitechapel which is an eight-minute walk away. Shoreditch High Street station is about ten minutes walk away. The address of the farm is Buxton Street, E1 5AR – the entrance is just by the junction of Deal Street.

The Farm is closed on a Monday, but open the other six days of the week from 10-4pm. Entrance is free but donations go to fund the farm and the animals care.

There’s also a small cafe on site where you can buy snacks and drinks and on Tuesdays and Thursdays, you can buy vegetables grown in the gardens as well. Find everything you need to know on their website.

The exception to the above is Goat Race day for which they sell tickets. The entrance fee also goes towards the upkeep of the animals. The 2018 Goat Race takes place on March 24th and if you want to find out more, check out their Facebook page dedicated to the event

I honestly didn’t expect such a lovingly created place in the middle of London’s East End.

To make it worse, I lived nearby in Mile End for a few years and had no idea this place even existed.

Other Fun Things to Do in East London

Because the farm literally is in the middle of everything, it’s easy to combine a morning or afternoon at Spitalfields City Farm with a heap of other East London fun.

The place is steps away from some awesome street art in Brick Lane and all the streets surrounding it.

You could hit up the uber-hipster Cereal Killer Cafe before your visit (all it serves is cereal from around the world) or, if you visit later in the day, don’t miss some grabbing a curry in Brick Lane – Aladin was always my restaurant of choice.

Shoppers can hit Spitalfields Market or Shoreditch High Street which are both a fairly short walk away.

Or if you want to carry on with the cute animal theme, the farm is also very near London’s original cat cafe Lady Dinah’s Cat Emporium.

If you want to learn a bit more about the area, you could take a walking tour – Brick Lane and the surrounding area is famous for its street art and a tour is the best way to learn the stories and techniques behind the amazing murals. I’ve done this one and really enjoyed it.

Or, if you’re more a history kind of person, why not gen up on local history with an East End history tour.

Plus, don’t forget that the East End was also the famous hunting ground of Jack the Ripper – and if you want to know exactly where he committed his crimes (and who he’s rumoured to be) a tour like this one is the way to go.

If you prefer your grisly tales more modern, also check out the Gangster Tours of the East End. This tour is even conducted by one of the actors from the gangster movies Lock, Stock and Two Smoking Barrels!

Finish up in one of the cool, local pubs – the rooftop at the Queen of Hoxton is great (albeit drowning in its own coolness), if you want something a little bit more laid back try Shoreditch High Street’s The Crown and Shuttle with its quirky sewing machine tables.

Or, go street food mad at Dinerama – don’t miss the upstairs bar which lets you serve cocktails from a flamingo watering can! It’s the perfect way to top off all that animal fun at the farm. 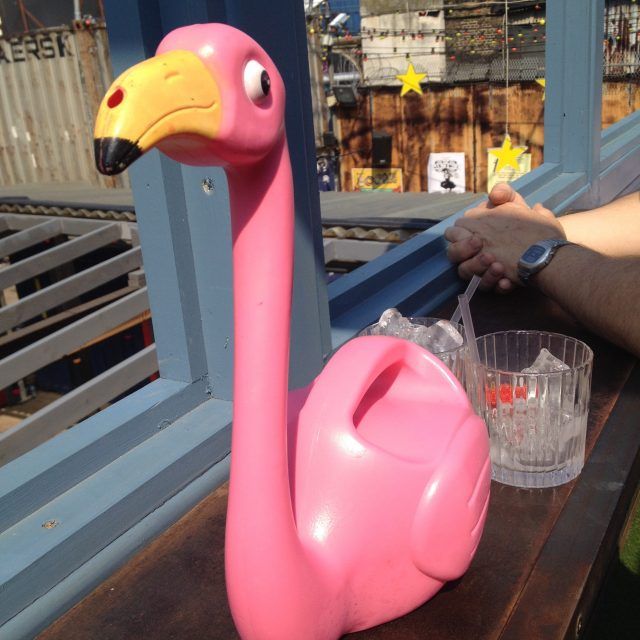 Where I stayed in London

I stayed in a few hotels on my trip as I wanted to try some of the emerging trend for mid-range ‘no frills’ hotel in London – these are clean, comfortable and safe but don’t cost an absolute fortune. Which are my main criteria for a hotel anywhere in the world – but definitely in London.

For checking out things to do in East London though, the best of the three I stayed in has to be Motel One in Minories near Tower Hill/Aldgate.

It cost an incredibly cheap – for London anyway – £98 a night and the room was large, clean and had everything I needed – private bathroom, huge bed, kettle, storage space (and don’t believe the reviews that say there’s nowhere to hang clothes – the clothes rail is just cleverly hidden!).

I’d booked a double room although I was the only person staying there and thought it was amazing. Of the three hotels I tried, it’s the one I’ll definitely go back to – assuming I can get back in there and you guys haven’t got there first!.

If you want to see what other hidden sights I found in London, click the link. 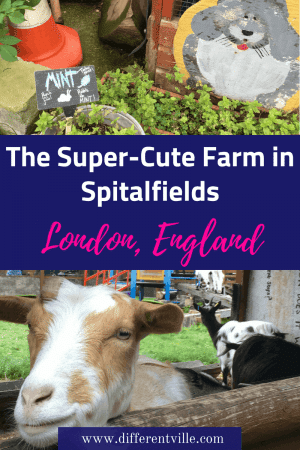 1 thought on “Spitalfields City Farm: A World of Cute Things to Do in East London”