I love jellyfish. Well, in the confines of a tank that is – I’m not so struck with the concept of sharing actual sea space with them. So, I was super excited to hear that there’s a whole new exhibit dedicated to watching them risk-free coming soon to Birmingham’s National Sea Life Centre in the UK. 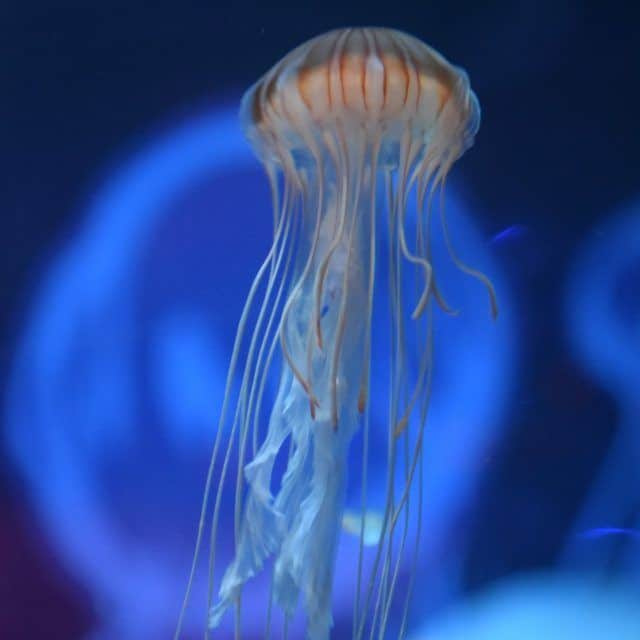 Opening on Saturday 24th March 2018, the Jelly Invaders exhibit ‘stars’ five different jellyfish species from around the world. There are the regular, clear ones known as moon jellyfish, colourful ones called sea nettles and even upside-down ones who rather than floating about the surface seem to be the lazy critters in jellyfish world as they actually lay their bulby-bits (known as a bell) on the floor of the ocean and then wave their tentacles in the air. to catch food and sunlight Who knew?

Personally, I just like watching jellyfish float – I find it super calming. And I’m not the only one – scientists once discovered that watching jellyfish float actually triggered the release of calming neurochemicals and as such, a few years ago, Japan’s Enoshima Aquarium near Tokyo launched a ‘jellyfish healing night’ where 30 lucky ticket winners got to spend the night sleeping in the jellyfish room (after some chill out massages and yoga).

Not sure if the National Sea Life Centre has anything along those lines up their sleeve for the future, but if you just fancy watching them float about during the day, Jelly Invaders is included as part of the normal entry ticket to the Centre. Here’s where to get more information, and book tickets online.

Other Cool Places to Watch the Floaty Fellas

Tsuruoka, Japan: The world’s largest display of jellyfish (according to the 2012 Guinness Book of Records anyway) is in Japan – specifically at the Tsuruoka KAMO Aquarium about 450km North of Tokyo in the Yamagata region. which has 60 different species floating around their tanks – the highlight being the Moon Jellyfish tank which contains 3-4000 glowy, flowy inhabitants.

Should you not be struck by their beauty, or just simply peckish, you can also try jellyfish ice cream in the gift shop!

The Planet Jellies exhibit at Toronto’s Ripley’s Aquarium of Canada has a tank of sea nettles jellies that looks like a piece of artwork (below). The sea nettles are bright red, the tank is bright blue. It looks amazing. They also offer upside-down jellyfish feeding at 3 pm some days which sounds awesome. If you want to skip the lines, book your ticket here. 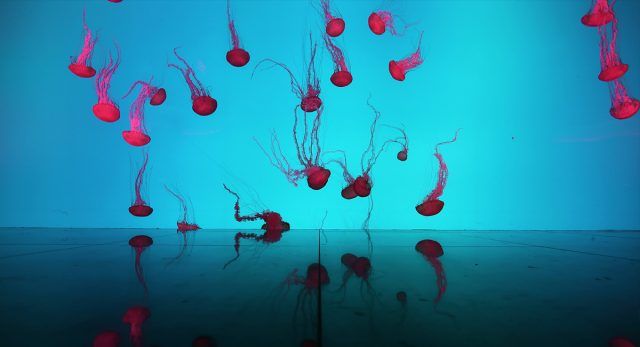 The Monterey Bay Jelly Cam. If you can’t travel right now, but want to get your jellyfish fix anyway, the Monterey Bay Aquarium actually has a live jelly cam linked to their jelly tank that broadcasts gentle tentacle swirling to your own home between the hours of 7 am to 6 pm CA time.

I may have spent a soporific 10 minutes on that earlier today. If you are lucky enough to be in San Francisco and want to visit the aquarium directly, you can book a day trip which includes time for a visit here

Sea Life London: Birmingham’s sister aquarium Sea Life London launched their new jellyfish exhibit in April 2017 – star swimmers include a Lions Mane jellyfish which, if it stood up, would be 2m tall. Thankfully it doesn’t stand up. If you want to go and visit, you can book your entrance ticket here.

Jellyfish Lake is completely enclosed and free of predators and so the jellyfish that live within it have lost their ability to sting and so it’s quite safe to get in the water with them. For you anyway. Unfortunately, a few years back the jellyfish numbers in the lake started to fall because they became exposed to chemicals from the swimmers. It’s now back though with some additional ‘jelly-security’. To find out everything you need to know, check out this comprehensive guide to the lake.

Walsh Bay, Sydney: My nearest jellyfish viewing spot is a bar in Sydney called The Smoking Panda which has a mini-aquarium next to the bar and allows the doubly calming impact of cocktails and chill out tentacle watching.

If you’d prefer to see them floating around in the wild instead, head down to Walsh Bay, close to Sydney’s The Rocks, there’s often a swarm of them floating around near the walkways that I can quite contentedly watch swirl about for quite some time. The wharves close to Pyrmont are also a good place to spot a hundred or so just hanging about.

So far I haven’t been tempted to go down there with a net, but one day, I might be tempted to hoik one out – and then I shall call him Squishy and he will be mine, and he will be my Squishy. Oh come, on you didn’t think I could write an entire jellyfish post and not use that somewhere did you?

Wishlist is the area of Destination>Differentville where we flag up things we wish we could get to but little things like money, proper jobs and no-one having invented teleportation yet make impossible. That doesn’t mean you shouldn’t hear about them anyway though.

If like this post did, why not sure it on social media so other people can find out about the jelly awesomeness too. 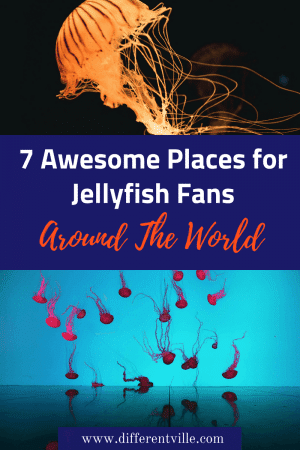