So, it finally happened. On October the 6th 2018, the famous Tsukiji Fish Market in Tokyo closed forever, but that doesn’t mean Tsukiji market should be completely off your list of things to do in Tokyo. The outer market that used to surround the fish market is still open for business – and it’s an amazing place to visit. In fact, it’s one of my favourite places in Tokyo.

Read on to find out why – and, if you still want to see the world’s biggest fish market, I also have the latest details on Tsukiji’s new home – the Toyosu Fish Market.

It might surprise you to find out that Tsukiji Market had more than one part. After all, the fish market at Tsukiji, with its thrilling tuna auction and stalls selling hundreds of types of fish, got all the attention,

However, the fish part of Tsukiji was known as the Inner Market and, surrounding it was the Outer Market, a fantastic rabbit warren of streets packed with shops, stalls and restaurants selling all manner of epicurean excitement; not only is this still most definitely open for business, it now also includes two new shiny three-storey buildings selling fresh fish to chefs and hungry tourists alike.

Four times I’ve been to Tokyo, three times I’ve spent hours getting lost in the market (and the other time I only didn’t go as I had one day after a cruise and it was closed by the time I got off the ship) and every time visiting Tsukiji Outer Market has been one of the highlights of my trip. 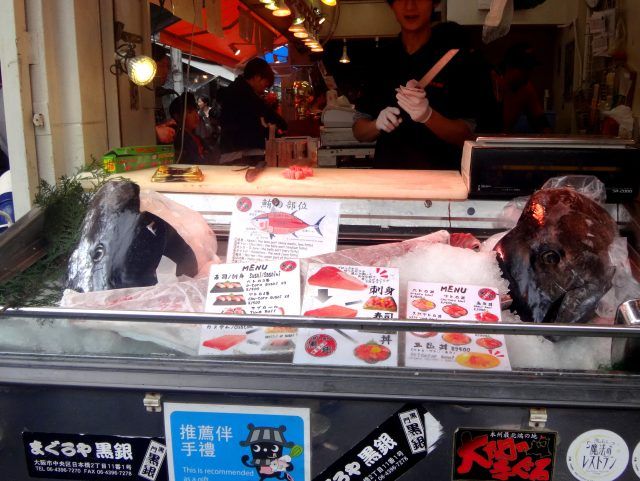 From the stall selling dried fish that decorates its interior with giant taxidermied animals (why? what’s a massive bear got to do with fish, except they eat them too), to the oysters as big as your palm that cost just 700 yen, you’ll wander around Tsukiji Outer Market alternating between having your mouth open in awe and filling it full of amazing food.

You want to see tuna, they have it – in giant slabs, in tiny pieces or just heads – giant, shiny, silver heads (I particularly like that the blue sign below the tuna above says ‘this is recommended as a gift’ because nothing says I love you like a giant fish head). 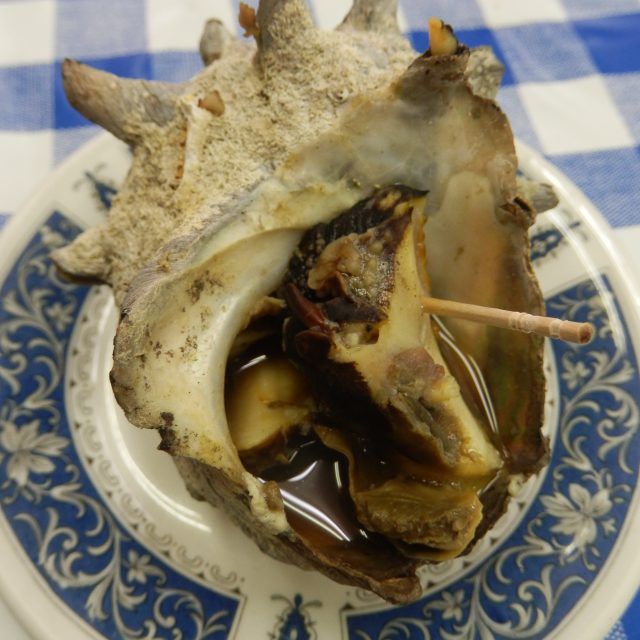 I’ve eaten the most enormous snail I’ve ever seen here – the first bite was the stuff of legend. Earthy, meaty yet with a creamy taste I’ve never been able to replicate anywhere else – the last mouthful tasted more like dirt, but oh my goodness that first bite.

I’ve tried the freshest sashimi, the most incredible dashi that explains why miso tastes so bad when you make it at home, yet so utterly moreish when you have it in Japan.

And I’ve met people working behind those stalls who are absolutely passionate about what they sell and why you should try it – unlike the old Fish Market where the stallholders had grown tired of the constant visitors getting in the way of business,  here you get smiled at, not scowled at! 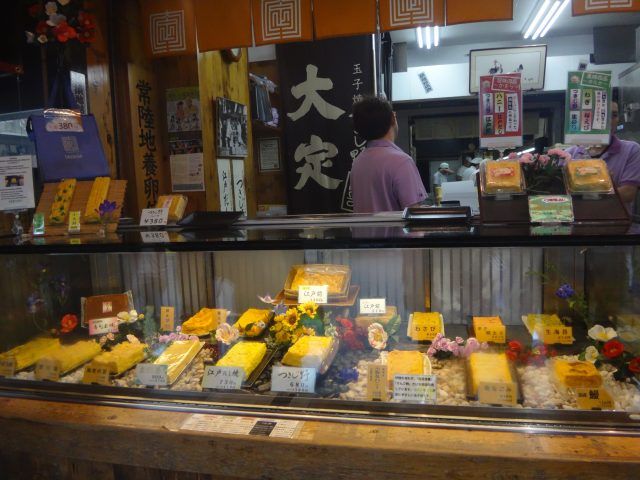 On this trip, I wanted to understand more about the things I was seeing. I booked a Tsujiki Fish Market Tour through Japan Wonder Travel and it was a great introduction to the market and the best it has to offer – particularly some of the areas that had been added since the last time I was here.

For a couple of hours we wandered the market learning about the items for sale and the stalls – we tasted that omelette and I learned that every stall has a secret recipe – and that many Japanese add sugar or sake to the mix.

I had delicious fish cakes and those palm-sized oysters.

I also learned that Fried Pond Smelt is not something I ever need to eat again – but that Fish Spines in toffee are quite the delicious snack.

I learned that Ninja’s used to eat dry soybeans to keep their energy up – and that I’d be crap Ninja as they make me cough (which is a shame as I got a bit of a taste for them) . 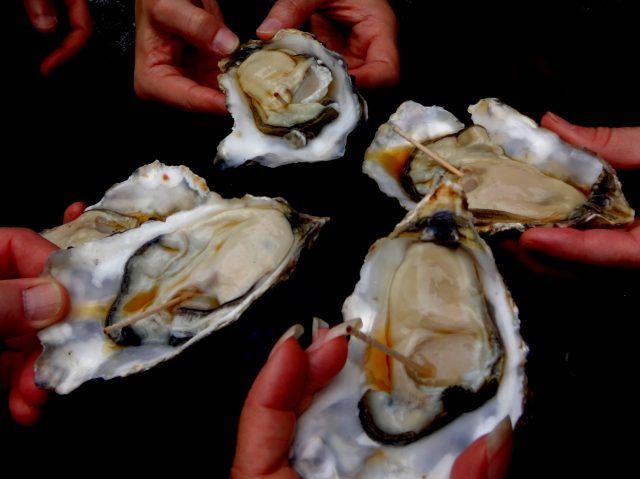 If you’ve come to Tsukiji to see fish, you also won’t be disappointed in the Tsujiki Outer Market, particularly the new buildings towards the Namiyoke Inari Jinja Shrine.

These now house the wholesalers who didn’t want to move to the new market and, while they are still selling to locals and chefs, many stalls offer takeout of some of the freshest fish you’ll find anywhere which you can take up to the dining area on the 3rd floor of the building to consume. 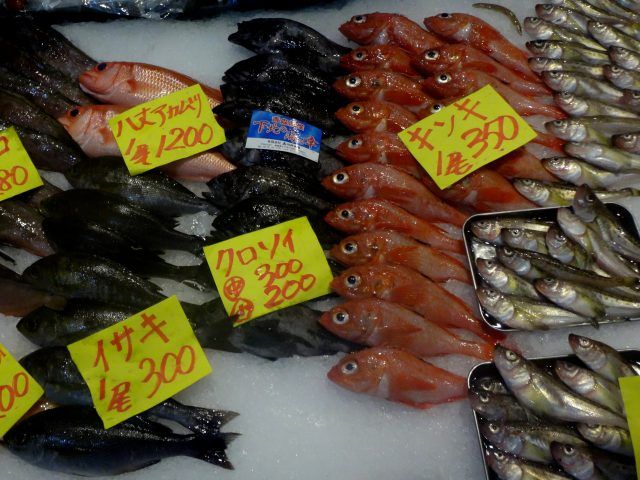 Some stalls do have ‘no photo’ signs, others say photos are welcome but ask that you please make way for paying customers, but it’s a totally different atmosphere from the old Inner Market.

By the time this closed the stallholders really had had enough of tourists, there were bans on photography, you couldn’t enter until gone 11am when all that was really left on the stalls were a few fish heads and some entrails – and frankly, it just wasn’t fun any more.

The Outer Market is a whole different kettle of fish (pun intended).

Okay so that might make it less authentic to some, but at least you’ll see something other than fish guts! And you don’t have to dodge the trolleys in here as you did in the old Tsukiji fish market. It’s like another world.

So, don’t skip Tsukiji, just plan to be enchanted by the treasure trove of shops and stalls of the Outer Market instead.

The stallholders here will be happy, the inner market stallholders in their new home without gawking onlookers in the way are happy – and you might be happier too. Everyone wins – except the fish, but let’s not go there!

So, you might now be wondered where Tsukiji fish market has gone. The answer is that it’s moved 4km away to a new site in Toyosu, an island in a more modern part of Tokyo.

The Toyosu Fish Market will open on October the 11th and consists of three buildings – two selling fish, one selling fruit and vegetables – it’s almost twice the size of the old market.

One of the reasons tourists were so unwanted in the last market was that it was small and pokey and really not set up for the influx of visitors – but the new space is far bigger and, from what we know so far, they are aiming to go back to the old days of Tsukiji, where, if tourists weren’t exactly welcomed with open arms, they were at least tolerated. So long as they didn’t touch the fishies! 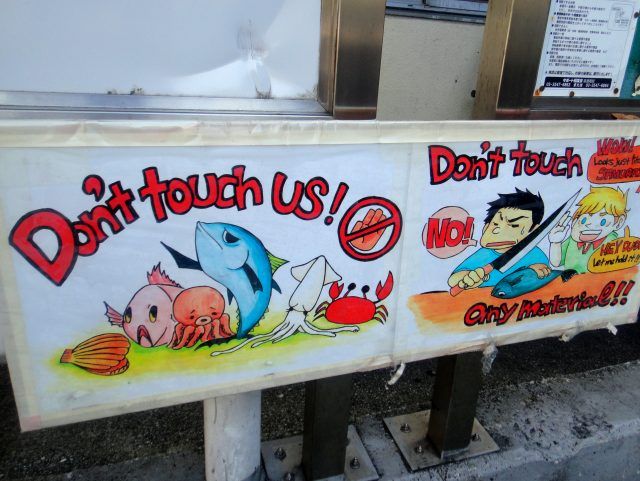 Obviously, I haven’t had the chance to visit yet, but here’s everything I’ve read so far about visiting Toyosu Fish Market.

It sounds pretty easy to get to – connected directly to Shijo-Mae station (on the Yurikamome line) by a covered walkway.

Unlike the last days of the old Tsukiji market, there doesn’t currently seem to be any rules about times tourists may enter the Toyosu Fish Market, so you can go early in the morning when it’s likely to be back to its busy best – but the new venue is apparently cleaner and less hectic than the old market.

Also, tourists aren’t going to be allowed to wander everywhere – there are designated places you can walk – and you won’t be able to buy fish yourself, unless it’s in the market’s restaurant area.

Will there be Tuna Auctions at Toyosu Fish Market?

The famous tuna auctions are still going to take place. At 4.30am.

Tourists will be permitted to view them, from a special viewing platform behind glass.

The only tiny downside here is that the trains don’t run that early so you’ll either have to grab a taxi or book a nearby hotel.

There are no hotels right next to the market yet – although apparently, they are aiming to have a hotel here in the next few years, until then, a couple of potential nearby options are…

Hotel Fukuracia Harumi. This 3 start hotel reopened in June 2018 – probably ready for the fish market to open. Check out rooms and rates here.

That’s all I know for now, but I’ll keep updating the details as I find out more.

Can I Book a Guided Tour of Toyosu Fish Market?

Yes. Food Tours Japan are offering a couple of different guided tours of Toyosu included a private guided tour, one combining the old and new markets and a visit to the new tuna auctions.

Japan Wonder Travel, the company I took my Tsukiji tour with are also offering a Toyosu tour.

I’m sure more will come once the tour companies get the lie of the land.

If you’re as keen on eating raw fish as looking at it, some of the famous sushi restaurants from Tsukiji have also moved over to Toyosu including Sushi Dai and Daiwa Sushi – the queues are still horrendous. You might also want to visit Iso Sushi and Iwasa Sushi. If you’re looking for some other unusual sushi restaurants to visit in Tokyo click the link – there’s sushi trains, stand up sushi, female chefs – and fire! 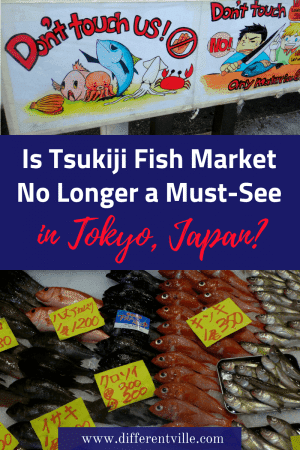