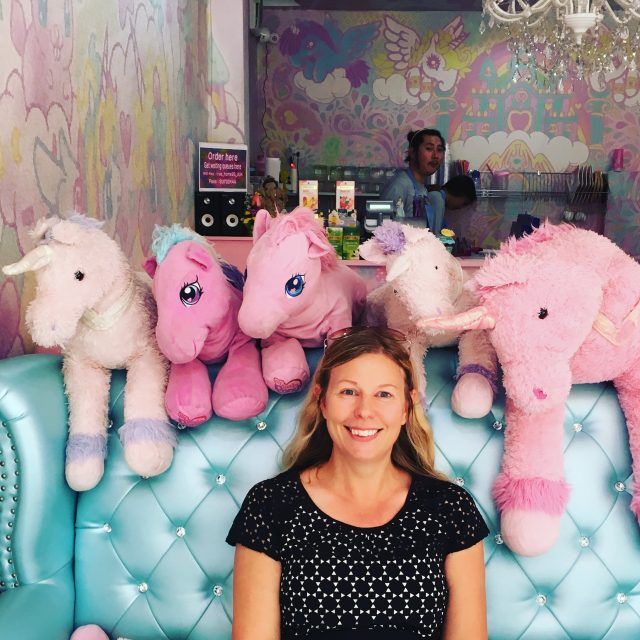 Every so often I get a message on my Facebook page from a friend saying ‘saw this place and thought of you’…this place is the Unicorn Cafe in Bangkok. And when I went to Bangkok earlier this year it was literally the first place I went.

Which proves two things a) my friends pay no attention to my Facebook page as none of them have spotted endless pictures of me surrounded by fluffy unicorns b) you should never trust me to plan your holiday itinerary unless your idea of fun is being surrounded by furry mythical creatures! But we digress…

What’s The Unicorn Cafe About?

Well, the clue is kind of in the name…but even with that heads up nothing prepares you for the cloak of unicornity that surrounds you when you first walk into this place.

Imagine what would happen if you let a group of four-year-old girls lose with all the cans of pastel paint in the entire world – after you’d hyped them up with sugar and then added glitter! That’s pretty much the best way I can describe the overall look of Bangkok’s Unicorn Cafe.

It’s like they told the decorator if one shade of pastel paint is good – six will be waaaaaaayyyyyy better. There are bubblegum pink sofas and shiny baby blue chairs. The carpet is covered with rainbows, the walls have a wallpaper of cupcakes and unicorns (who knew you could buy this!!). Add some sparkly chandeliers – and fluffy unicorn toys EVERYWHERE and we’re good to go.  It’s so sickly sweet I’m surprised you come out with teeth.

Considering my personal Instagram name is Be More Unicorn,  I was in my element. 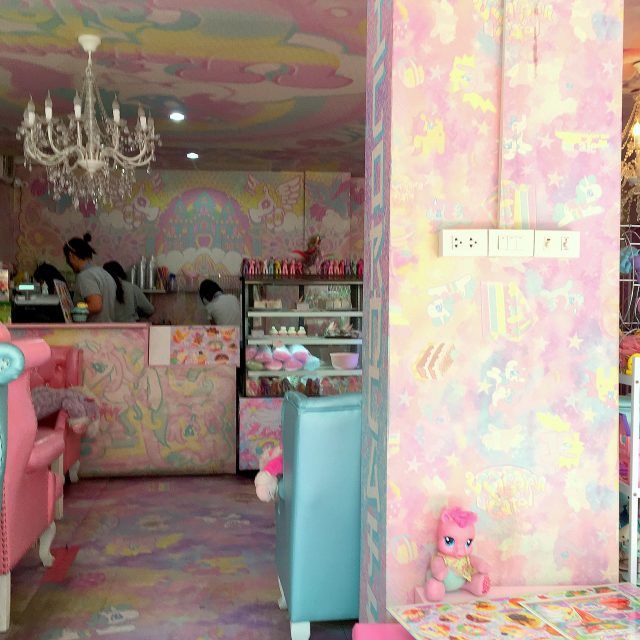 Checking Out the Magical Menu

Of course, when one is in a cafe, even one full of unicorns, you can’t just sit there empty handed. One has to purchase something from the menu to consume – and the Unicorn Cafe has a magical array of exciting creations keeping the Thai food colouring industry in business for you to choose from.

Take your pick from pastel rainbow cakes, burgers with horns (hopefully not made from actual unicorn)  and unicorn carbonara – which is most probably the most exciting thing ever to happen to pasta as it has pink and blue noodles! There are pancakes, there are waffles, there’s ice cream with horns in an array of shades to match the decor. Even the coffee comes with rainbow sprinkles. 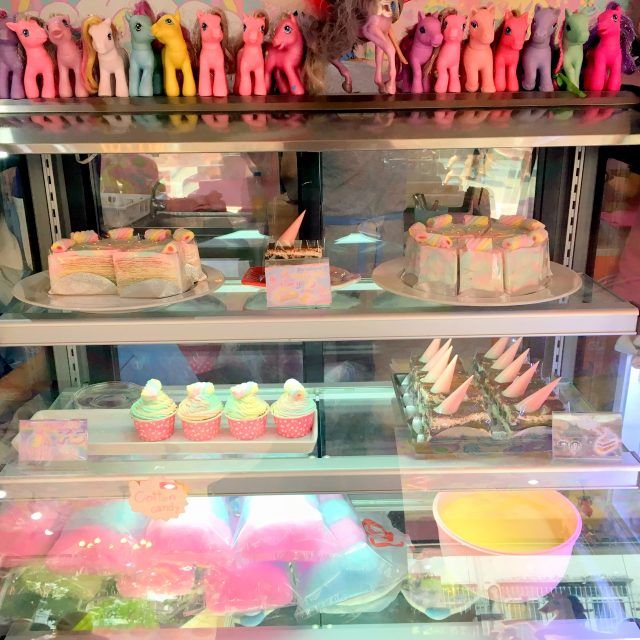 Sadly, I was in Bangkok writing an article for a food magazine and had to go to go for lunch immediately after my visit so, I couldn’t partake in any unicorn food – slushies, however, go into another stomach or something so I decided one of those would be fine!

I ordered a pink and blue icy thing; it was magical to look at, and for someone who actually doesn’t have a sweet tooth, not that sickly to drink!

This is good as otherwise, you might spit it out on all the fluffy friends lying around for you to touch and hold and cuddle….and, ignoring the fact that some of them were a bit grubbier than I like my touchable mythical creatures, cuddle I did.

As I compared white unicorns to purple unicorns; purple ones to pink ones, slurping my pastel coloured diabetes in a cup, The Boyfriend looked on horrified. Mind you, he was the only man in the place so I suppose I should give him props for not running screaming into the distance as soon as I opened the door!

Update: The Unicorn Cafes Are Breeding!

Even though we’d got there about five minutes after it opened at noon, the cafe was quite busy with people at most of the tables – this might be less of a problem now as since we visited they’ve opened a second cafe just around the corner. The branches are now called A and B – and it seems from what I can gather from Instagram and reviews on TripAdvisor that I went to cafe A and cafe B is even more uni-tastic. It literally looks like a soft toy factory exploded – thankfully, with no major injuries as the unicorns safely landed to hang from the ceiling.

Did I love the Unicorn Cafe?

Wellll……as fun, furry and fabulous as being a big kid was, I have to admit I came out a little disappointed – and not just because no-one offered me the chance to wear one of the unicorn onesies on offer. The Unicorn Cafe was magical to look at, but it just didn’t seem as much fun as I wanted it to be. 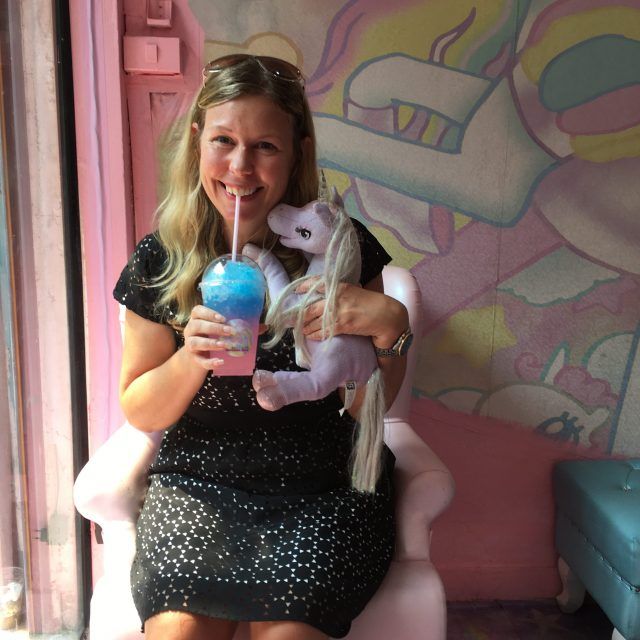 I’m not sure if this was because I’d created such a hype of excitement in my head that nothing could match it except maybe, a real unicorn, sitting behind the counter waiting for treats. Or, because everyone, including me, was so busy taking pictures of themselves with the unicorns and posting them online, they were all staring at their phones.

No-one was actually chatting, laughing or doing all that other stuff you are supposed to do in a cafe full of fluffy creatures and sugar. It was all strangely serious for something theoretically so childish.

Don’t get me wrong,  I’m really glad I went. I feel proud that I drank the unicorn coolaid (quite literally), got my selfie with roughly 30 fluffy magical creatures and ticked it off my ‘things that make me ridiculously excited’ bucket list. But we spent half an hour there and that was about enough. Mind you, should I be back near Silom next time I’m in Bangkok, I’ll probably nip back for a nose at Cafe B. I do hope they’ve washed the plushies by then though!

Where to find the Unicorn Cafe?

It’s in an area called Silom on a small road called Soi Sathorn 8. The nearest BTS station is Chong Nonsi from which its a five-minute walk. A few people have said it’s hard to find, but here’s how to get there according to the cafe’s Instagram page

Note it’s closed on a Monday, but otherwise the opening hours are noon to 8pm.

Unicorns not your thing? Don’t panic –  there’s a whole heap of other themed cafes in Bangkok for your amusement…

At Mermaid Castle Siam – you get to wear mermaid tails, everything is sea themed and the deserts and cupcakes have tails! It’s right in the middle of the main touristy shopping area, on the other side of the main road from Siam Square mall.

Update: Last time I was in Bangkok, I went to check this out and it had closed. Sorry guys.

There’s one with a fat racoon.

Officially known as Little Zoo Cafe Siam. This is the second branch of Little Zoo, the first is way out of the city and needs a shuttle bus pick up so I was excited to hear this one had opened. I wasn’t so excited when they wouldn’t let us see the animals without ordering food not just some drinks. Because we went mid-afternoon we weren’t hungry enough to eat and so we had to leave. Note to anyone reading this, go hungry.

Their website still only talks about the older cafe so, you’ll need to use google maps to find this. The address is 420 Siam Square 11 Alley, Khwaeng Pathum Wan

There’s one where you can have tea with a Moomin.

This is in the Siam Centre, again, in the main shopping area. It’s tucked up on the 4th floor. There’s also a Moomin gift shop if you need to pick up souvenirs for any Moomin loving buddies. 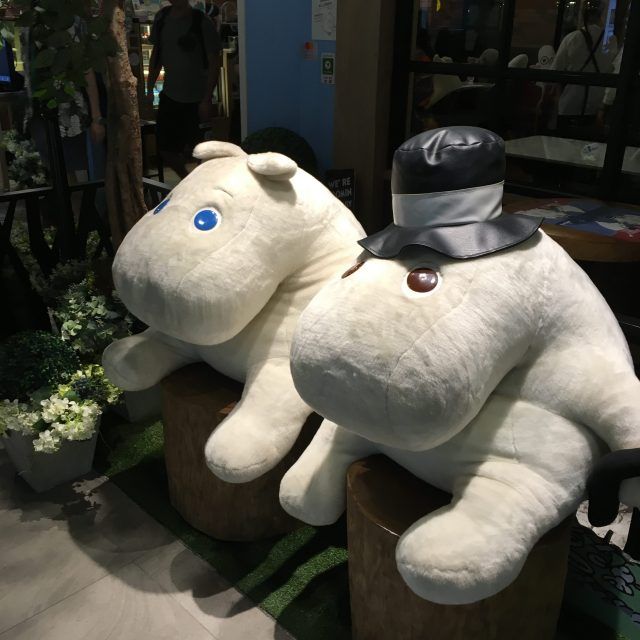 This is called Hero Food and Gathering, Now, while I don’t have any issues with the seedy side of Bangkok, if you’re a parent reading this I’ll just mention that this isn’t in the most obvious location to take kids. It’s at the far end of Soi 4 in the Nana district, and the start of that road is the main red light district is in central Bangkok!

We used to stay in this area a lot (there’s a hotel called the Phachara Suites nearby which has huge suites for not much cash) and so are quite au fait with any changes and on this trip, we did notice more ‘normal’ businesses moving in at this end of Soi 4 – some of the bigger girly bars had been knocked down and apartments and shops were going in their place so maybe the owners were actually ahead of the game!.

Update: Seems I might have been right about their odd placement, when I checked in March 2019 Hero Food and Gathering was closed.

You might not think about chocolate makers in Thailand, but a local-based chocolate-themed cafe has just opened in Sathorn. It’s set up by local chocolate makers Kad Kokoa and offers a mix of chocolatey drinks, desserts and pastries based around their locally produced chocolate – recently voted the best chocolate in Thailand. Find it at 1076 Thanon Narathiwat Rachanakharin 17, Bangkok, Thailand 10200.

If you can’t make it to the cafe there’s a lot of other options to get your chocolate fix in Bangkok – check out this piece on the best chocolate in Thailand which tells you what brands to look out for – and where to find them.

Also check out this post from Coconuts which suggests some other theme cafes I hadn’t heard of before – including a Charlie Brown one, a family friendly Maid Cafe, an amazing Alice in Wonderland themed land and the fairy tale themed Mocking Tales which I’m pretty sure will be on my list next time I visit Bangkok.

Where We Stayed on This Trip

We actually stayed in a few places, but most convenient for the Unicorn Cafe is an amazing apartment building called Bangkok Riverside Condo which has a huge, lounge, bedroom and kitchen – plus a bathroom with floor to ceiling windows overlooking the river.

It’s in a less touristy bit of Bangkok but within easy reach of the BTS Skytrain and the very cool Bangrak area of Bangkok which his famous for it’s street food. It’s also a short hop on the BTS to the Unicorn Cafe from here and within an easy train journey to Siam Square where most of the other theme cafes can be found.

So, have you been to the Unicorn Cafe or any of the other themed cafes I mention in Bangkok? What did you think? I’d love to hear about them in the comments. And, if you fancy telling others about this post, why not share it on social media. Every time you do, a new unicorn is born. 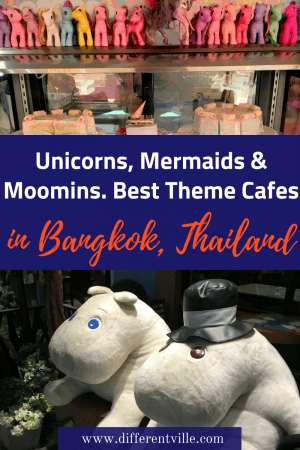